[Also in the Dec. 9 edition: Sharif Durhams returns to NC as The N&O/Herald-Sun’s new managing editor, and answers a few of our questions; Report for America adds NC newsrooms for grant-funded journalist jobs in 2021; and more good work. Sign up to get NC Local in your inbox each week]

Tuesday was an extraordinary day, to say the least, at Alamance County’s Historic Courthouse in Graham. Tom Boney Jr., publis 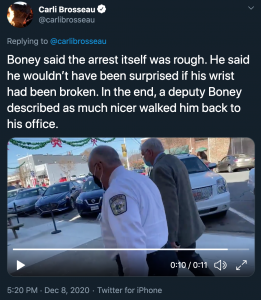 her of The Alamance News, was forcibly removed from a second-floor courtroom and handcuffed in a hallway outside — for asserting his constitutional right to be there.

Deputies — citing COVID restrictions and by order of visiting District Judge Fred Wilkins — had denied The Alamance News, Carli Brosseau of The News & Observer and Jordan Green of Triad City Beat entry to the courthouse. They were there to cover the case of a woman accused of felony assault with a deadly weapon against two girls at a Black Lives Matter protest in August. (The journalists also had been barred Dec. 2 from a hearing in another protest-related case.)

Their three news organizations objected to the denial of access and asked for a hearing. The motion, written by their attorney, Amanda Martin, general counsel to the North Carolina Press Association, said the journalists had been told they could not enter unless they were parties to the proceedings. The denial also came without a written order specifying the reasons — something that U.S. Supreme Court rulings have said is required. And the journalists had been denied their right to a hearing on the decision.

The objection (read it here) cited Article I, Section 18 of the state Constitution (“All courts shall be open”) and several precedents supporting a “common law and constitutional right of access to judicial records and proceedings.”

‘This courtroom is not closed to the public; it is closed to you.’

But when Boney, who was allowed inside to file the objection, tried to speak in its defense, Wilkins ordered him removed from the courtroom. Deputies took him out and handcuffed him briefly in a hallway.

Boney told Green later that Wilkins had told him: “This courtroom is not closed to the public; it is closed to you.”

Brosseau, in this Twitter thread, and Green, here, offer a running account of what happened. Here’s the Alamance News report.

All three newsrooms had to rely on interviews afterward to report the outcome of the case (two misdemeanor guilty pleas). [N&O] [Triad City Beat] [Alamance News]

“We plan to appeal and seek an immediate remedy,” Robyn Tomlin, president and editor of The N&O, told me this morning. Green told me that Triad City Beat also would seek appellate review.

(You’ll remember that one of Boney’s reporters, Tomas Murawski, was arrested in October while covering a voting march in Graham. The Reporters Committee for Freedom of the Press has urged the Graham police to drop those charges.)

The RCFP has a guide to reporters’ newsgathering rights, including court access.

Meanwhile, down I-85 in Gastonia…

Gaston County commissioners had been scheduled to vote Tuesday night to authorize spending $100,000 to pursue a libel suit against The Gaston Gazette, but their meeting was delayed until Dec. 17 by what a county news release called “a potential COVID case,” Ann Doss Helms reports for WFAE.

The lawsuit challenges a Gazette report Nov. 12 that raised questions about the board’s adherence to the state’s Open Meetings Law.

Each of the seven commissioners, and the board itself, are plaintiffs in the suit, which says the Gazette story “impeaches Plaintiffs in their trades or professions.” It asks for actual and punitive damages.

Stay tuned on that one, too.