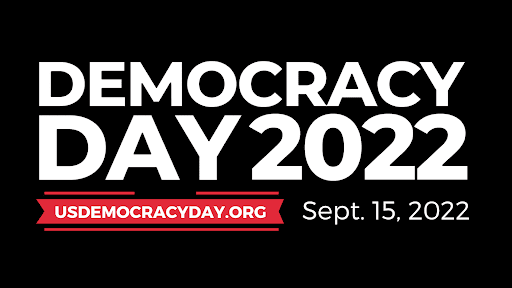 Check out the full NC Local newsletter from September 14 for more from the Workshop, including industry news, job postings and shout-outs to journalists statewide. Sign up to get NC Local in your inbox every Wednesday.

Democracy, defined literally, is government for the people, by the people — the ability to vote, organize, protest and debate, among many other actions. It’s a word that represents so much of what’s quintessential in American politics, and yet it’s often something we have taken for granted.

When it is threatened, journalists are often the first to respond. But what happens when democracy is truly in crisis and constitutional rights are at risk? And what are journalists doing to help their communities understand this threat and its impacts? These are questions being asked by the organizers of US Democracy Day, a collaborative effort led by the Center for Cooperative Media and several other organizations.

“Democracy Day is a united effort to draw attention to the crisis facing American democracy, one that incentivizes local newsrooms to report on how democracy works in their communities,” said Stefanie Murray, director of the Center for Cooperative Media, in a Medium post. Other organizers include Jennifer Brandel of Hearken; Bridget Thoreson of the Institute for Nonprofit News; and Rachel Glickhouse of News Revenue Hub.

The collaborative picked this Thursday, September 15, as a day of broad media coverage of democracy’s crisis, because it coincides with the International Day of Democracy. The group has signed up hundreds of print, radio, TV and digital media to report on the state of U.S. democracy. The NC Local News Workshop signed on as a partner, as well as several other North Carolina news providers. Here are a couple of them — and why they see civic engagement and democracy as crucial:

As a journalist living at the U.S.-Mexico border, McIntyre has spent 10 years reporting on immigration. Policies on immigration affect everyone at the border, regardless of nationality, she said.

“I focus on issues of power and how power works, which is, of course, intrinsic to our government and how our country operates,” McIntyre said.

For a cover story in the Christian Science Monitor in 2012, she reported on “The Amnesty,” a key policy from the late 1980s that offered a pathway to citizenship for thousands of undocumented immigrants. It was important to relate the effects of a decades-old piece of legislation to current immigration issues, she said. How did this policy affect different communities? How did it affect American society?

McIntyre maintains that journalism should be viewed as public service work. A story like that one can pique the interests of elected representatives up to the federal level, where nationwide policy can be made.

When asked what democracy means to her, McIntyre said that the media have become the tool to uphold democracy, not the other way around. The real purpose of a journalist, she said, is to be a watchdog:

“To do accountability work — that kind of work is hard. It takes longer and is more expensive to fund, but it can also be really motivating when you are actually able to make a change in the world.”

While working with her Advanced Reporting class at UNC-Chapel Hill, McIntyre challenges young reporters to think critically about structures of power. We have to make sure that none of us take anything at face value — that we fact-check statements and operate from a much more thoughtful place, she said. The future of journalism relies on those who believe the media can always do better.

That’s why McIntyre first sought out journalism, and she encourages her students to develop investigative skills that become instinctive while bringing an inclusive perspective. McIntyre tells her students that the interns, students just like them, are the real change agents at any organization.

“We have to be able to have more uncomfortable conversations around pay equity, race, how all these things intersect and inform the work and coverage we do,” she said. “My hope is that we dedicate ourselves to being the change agents in our newsrooms, and that we don’t leave the responsibility of making things better just to our editors.”

Small news organizations around North Carolina are shutting down or struggling to survive, suffering from lack of circulation, low funding, and staffing shortages. Some organizations can operate on digital platforms and cover large swaths of the state without having to hire journalists who live in local communities.

At this point, what is the value of having local news?

As director of Charlotte Journalism Collaborative, Chris Rudisill is focused on facilitating journalism that is immersed in communities. By building trust and engagement within communities, he believes, journalists can address the issues that they themselves are facing as community members.

Democracy, Rudisill said, is about equity, dialogue and civic responsibility. In collaborative, solutions-based journalism, there’s immense power in finding innovative ways to build relationships that will then advance universal stories that affect both the journalists and their communities.

“The CJC moves beyond media competition or simply reporting on the problem,” he said. “We are actively trying to learn from others, increase dialogue and highlight the importance of local news in a thriving democracy.”

There is no more prime example than the Collaborative’s long-term project on affordable housing in Mecklenburg County. The CJC has increased research and data on evictions and the impact of company ownership of single-family rental housing. It has hosted town halls and a summit on affordable housing, bringing housing advocates, journalists, and community leaders together to discuss solutions.

“We have created a more equitable view on affordable housing in our communities and investigated solutions that can impact policy and planning, so we don’t approach this issue from a certain side. We know it will take the joint efforts of every community, every political group to solve.”

In their strategic planning process last year, CJC members committed themselves to choosing courage over comfort. The bottom line, Rudisill said, is to act in service for the community. By increasing opportunities for engagement, journalists learn to listen more deeply, search for truth, and build systems that involve more people. Even when the truths are unpopular or uncomfortable, he said, we utilize our collective power to voice solutions to city crises.

Other North Carolina partners in Democracy Day include: