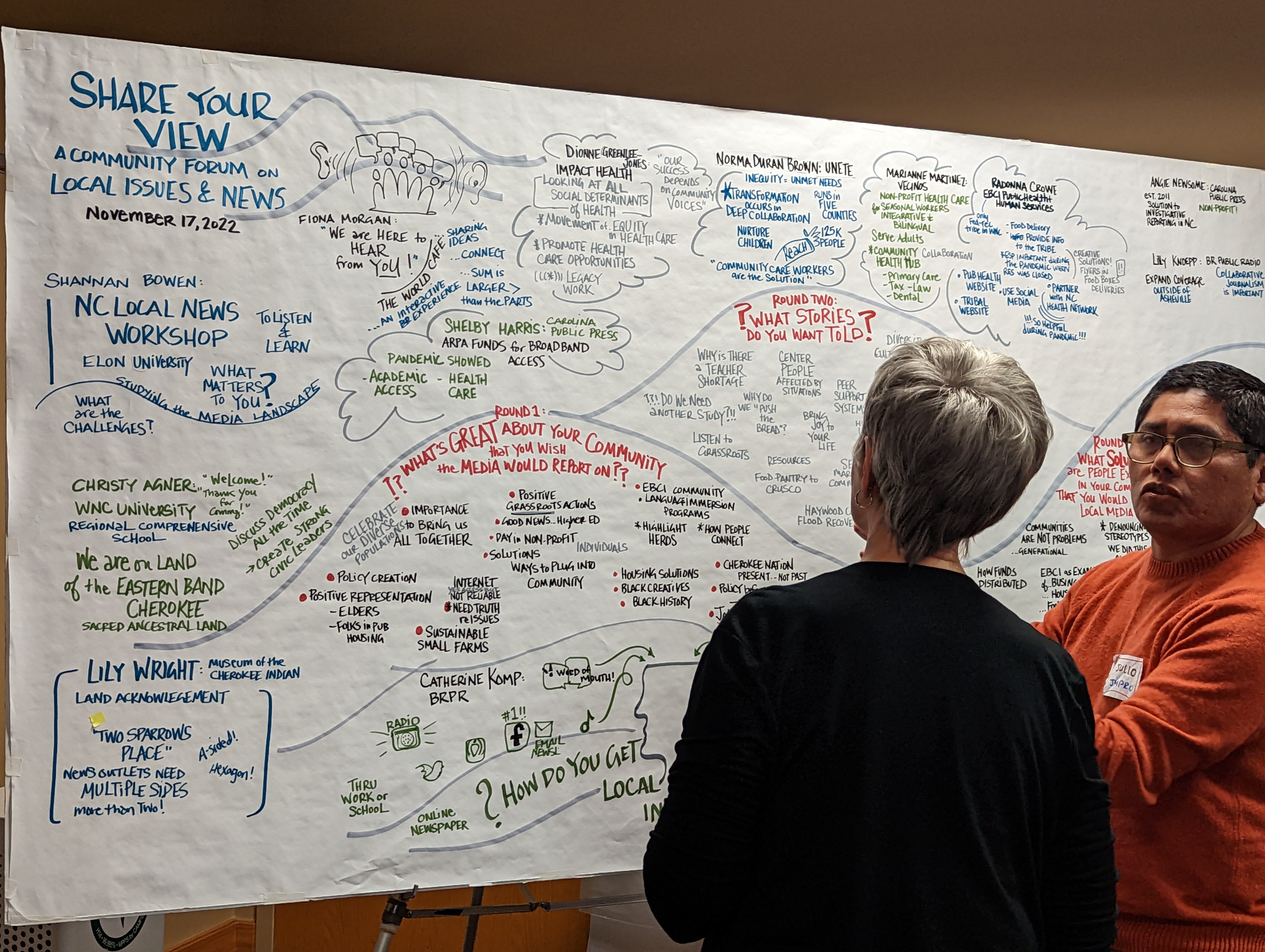 Consultant to the Workshop

Collaboration and connection were the major themes in a conversation about local news and information held just before Thanksgiving on the campus of Western Carolina University in a rural, mountainous part of North Carolina.

About 40 people attended the event, held Nov. 17 at WCU’s Hinds University Center. People came from the towns of Cullowhee and Sylva, from Haywood County, and from as far as Asheville. Many participants noted that working together is a part of Western North Carolina culture, a way of turning limited resources into abundance.

The forum itself was a collaboration between the NC Local News Workshop, Carolina Public Press, Blue Ridge Public Radio and the WNC Health Network. Our goal was to hear from residents of Western NC about the news and information they want to see, and to give them an opportunity to speak directly to journalists from local media organizations. It was also part of the Workshop’s major ongoing project in Western NC to understand the news and information needs of various communities in the region.

Most of the event was devoted to small-group discussions in which community members sat beside journalists and shared ideas, questions, concerns and hopes for their communities–and thoughts about how storytelling and fact-sharing can help strengthen those communities.

The desire for more positive coverage, in contrast to the conventional crime- and disaster-driven news cycle, is a theme in practically every community listening gathering about local news. So we delved into the how and what of those stories. Insights and ideas abounded.

We heard a desire for stories about “unknown heroes” in the community, stories that embrace the complexity and diversity of Appalachian history and culture, that highlights Black creativity and entrepreneurship, and reporting that gives local residents a chance to influence public decisions and to hold local government and organizations accountable.

“We can get paralyzed by the size of problems, but to see someone working on a solution is inspiring and helps us feel less helpless,” one participant commented.

As people entered the room, they were invited to share responses to the question, “How do you get local news and information?” Word-of-mouth, radio, and Facebook were popular ways of finding out what’s happening. As for what people most wanted reporting on, the standout answers were “What people and organizations are up to,” “solutions to local problems,” “racial justice,” and “information about public decisions before they happen.” (Shoutout to the Listening Post Collective for inspiring this activity–check out their playbook for civic media.)

Throughout the event, graphic facilitator Caryn Brownelle Hanna took visual notes of the conversation on a large paper canvas, producing a record the Workshop will share with participants.

After a greeting from WCU external relations director Christy Agner, who read the university’s land acknowledgement honoring the Cherokee land and history, Lily Wright, of the Museum of the Cherokee Indian, opened the conversation by sharing her perspective as a member of the Eastern Band of the Cherokee Indians. Wright previously helped to lead a recent forum on the Qualla Boundary for the NC Local News Workshop.

Working to preserve Indigenous language and culture has made her passionate about the need for positive coverage of people of color. “News outlets don’t need to show a two-sided story,” she told those of us gathered in Cullowhee. To truly showcase diverse points of view, “be four-sided, six-sided, 10-sided.”

Shelby Harris, a reporter for Carolina Public Press, talked about her reporting on how North Carolina plans to spend $5.4 billion of American Rescue Plan Act (ARPA) funds, particularly in the western part of the state, and how some of that spending will increase broadband access for hundreds of thousands of NC residents.

Small groups of five or six people discussed questions like, “What’s great about your community that you wish the media would report on?” and, “What solutions are people in your community exploring that you’d like to report on?”

Participants used Post-It notes to record thoughts and ideas. By grouping those notes, we could see themes emerge:

Housing, health and food access were the biggest topics that arose, with an emphasis on how those needs are intertwined. Participants had stories of grassroots responses to those community needs, such as a farmworker who makes sure his neighbors have enough to eat.

Pride in Appalachian culture, in all its diversity, was a major theme, emphasizing the common histories among Cherokee and African American residents. For newcomers to the region from Mexico and Central America, language access was a key concern. We discussed the need for news and other forms of information in Spanish.

There were calls to cover elders and aging in a more “positive light,” and to consider that approximately one third of the population of seven counties in the region are over the age of 60. Likewise, there was a desire for coverage of youth in the region, particularly opportunities for young people and youth initiatives among the Eastern Band of the Cherokee Indians.

Racial justice was a strong theme, particularly with regard to accountability coverage of local governments and organizations, “making it clear we’re putting pressure on you.”

“It’s important to talk to each other and get news involved to spread [information] further than our inner circles,” one participant said.

Voices from the public health community

Public health perspectives were a key part of the evening, thanks to the partnership of WNC Health Network. In between rounds of small-group conversation, we heard from community leaders in that field.

Dionne Greelee-Jones described how her organization, Impact Health, had only recently been created to implement the Health Opportunities Pilot program across 18 Western NC counties and the Qualla Boundary. She said sharing information is critical, because lack of awareness about opportunities and available resources is a big challenge – a challenge she intends to surmount through collaboration. “Impact Health is new,” she said, “But we look at this as legacy work. We have roots here in WNC, and there is too much brain power in our space to fail.”

Collaboration is also vital for Norma Brown’s work with UNETE, the organization she founded to promote health equity. Her organization works across five counties through more than 70 collaborations. “Support your community health workers because they are definitely the answer to many of the challenges we are trying to solve here,” Brown said.

Marianne Martinez shared the news that her organization, Vecinos, will soon be opening a wrap-around community health clinic on the WCU campus to serve uninsured farmworkers. And Radonna Crowe, who works in public health and human services for the EBCI described the ways her tribe has navigated COVID and shared public health information since the pandemic began.

After the event, Adrienne Ammerman of WNC Health Network reflected on the discussion. In 2019, her group formed a collaborative of collective impact health communicators from public health agencies, hospitals, and community-based partners across the 18 western counties and the Qualla Boundary.

“We felt it was important to have representatives from our community health improvement and health communications work in the region at the table with journalists and other community members, because we have a shared goal of ensuring that western North Carolinians have a voice in and access to credible information that they need, and that reflects the diversity, assets, and challenges of their communities,” Ammerman said. “It was a beautiful evening of relationship-building that will help enrich the information landscape of our mountain region.”

Lilly Knoepp is Blue Ridge Public Radio’s first full-time regional reporter based in Sylva. She explained that BPR recognized the need to report on the region west of Asheville. During the event, she and content director Catherine Komp highlighted the partnership between local media and other groups as central to that goal.

“Collaborative journalism is important for the future of local journalism in this region,” Knoepp said.

The Workshop is continuing its research and community listening across WNC. Our researcher, Brenda Murphree, has shared initial insights from her research on information needs so far, and she has invited participants to take and share her survey as the research phase comes to a close. Findings are coming soon, and will be shared in 2023 as a resource for local news media and community members.