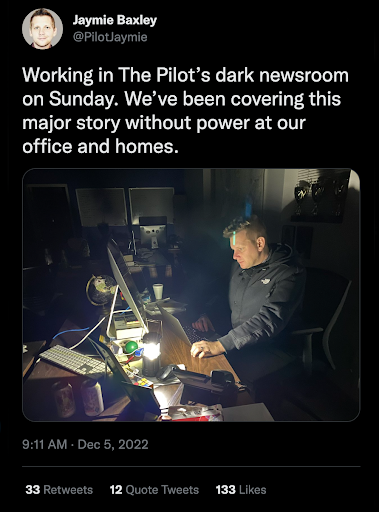 Check out the full NC Local newsletter from December 7 for more from the Workshop, including industry news, job postings, news about North Carolina journalists and more. Sign up to get NC Local in your inbox every Wednesday.

Many North Carolina newsrooms have done a splendid job covering the Moore County blackout since an attack on substations on the night of December 3 took tens of thousands of people off the grid for days. But none has done so more admirably than the staff of The Pilot, the 102-year-old, family-owned newsroom in Southern Pines. They’re not only covering the story; they’re living it.

The Pilot staff has kept their community connected to information and help throughout, while themselves doing without heat, light, easy internet, hot showers, warm food. They’ve kept us informed with running updates, including news on the investigation; they’ve updated us on the progress of the repairs; they’ve reported how residents are coping, how businesses are surviving and how the community is coming together; they’ve told people where and how they can get help; and they’ve reported on the drag show that’s at the center of attention as folks try to figure out why this happened.

I talked with reporter Jaymie Baxley late Monday about the experience. Here’s our conversation, lightly edited for length and clarity:

Read moreJournalism thrives in darkness: A chat with reporter Jaymie Baxley of The Pilot on the Moore County blackout 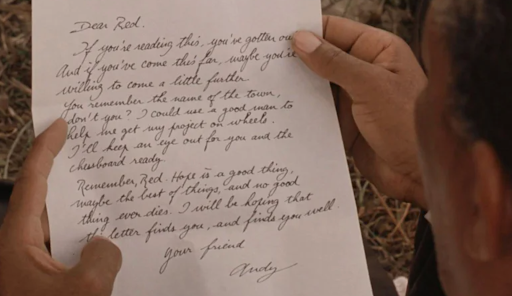 Check out the full NC Local newsletter from November 30 for more from the Workshop, including industry news, job postings and shout-outs to journalists statewide. Sign up to get NC Local in your inbox every Wednesday.

Tommy Tomlinson and Daniel Kreiss made me redo this week’s newsletter at the last minute — Tomlinson, by writing something characteristically smart, and Kreiss, by …

You know what? I still don’t even know what Kreiss did. (And neither does he.)*

Indulge me; blame them.

In the spring of 2020, when I finally slipped behind the Raquel poster and slid out of the Facebook sewer pipe, after 14 long years on the inside, I scribbled a note to my friends, telling them where they could always find me: over on Twitter.

Some were puzzled. “What’s the difference?” one asked.

Read moreNo good thing ever dies. Does it? 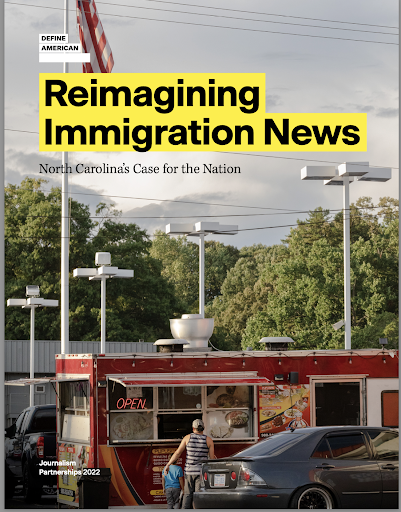 Check out the full NC Local newsletter from November 9 for more from the Workshop, including industry news, job postings and shout-outs to journalists statewide. Sign up to get NC Local in your inbox every Wednesday.

We in North Carolina’s news and information community are getting our closeup with Define American’s new journalism research report, “Reimagining Immigration News: North Carolina’s Case for the Nation.” We also have a gauntlet at our feet.

Liz Robbins, Define American’s director of journalism partnerships and the report’s lead author, wrote for Poynter on October 27 about why North Carolina was the focus of this research and analysis of how we cover immigration news. She cited our state’s fast-growing, diverse and vibrant immigrant communities; its deficiencies in reporting on them but with some notable exceptions, particularly in bilingual collaborations; and its varied application of immigration law. (“It’s a complex place.”)

Two days later she moderated a panel at the Society of Professional Journalists in Washington with three North Carolina journalists who are answering the challenge: Victoria Bouloubasis, award-winning freelance journalist and co-author of the report; Paola Jaramillo, executive editor and co-founder of Enlace Latino NC; and Daniel Viotto, lead anchor and managing editor of Telemundo Charlotte.

You should download and read the report in detail, but some of the key takeaways were these:

The report offers seven recommendations at the end (and most of them don’t require money — just smart changes in priority and approaches).

In an email exchange, Liz talked a little more with me about what’s working, what’s not, and what’s next:

EF: Are you still glad you chose North Carolina as your model?

LR: Absolutely! What a vibrant news ecosystem. Even though we found deficiencies in immigration coverage, we also wanted to uplift what some legacy and nonprofit outlets are doing well to center immigrant communities. We conclude with seven recommendations for newsroom leaders in every state.

Read moreChallenge to North Carolina: A conversation with Liz Robbins on immigration reporting 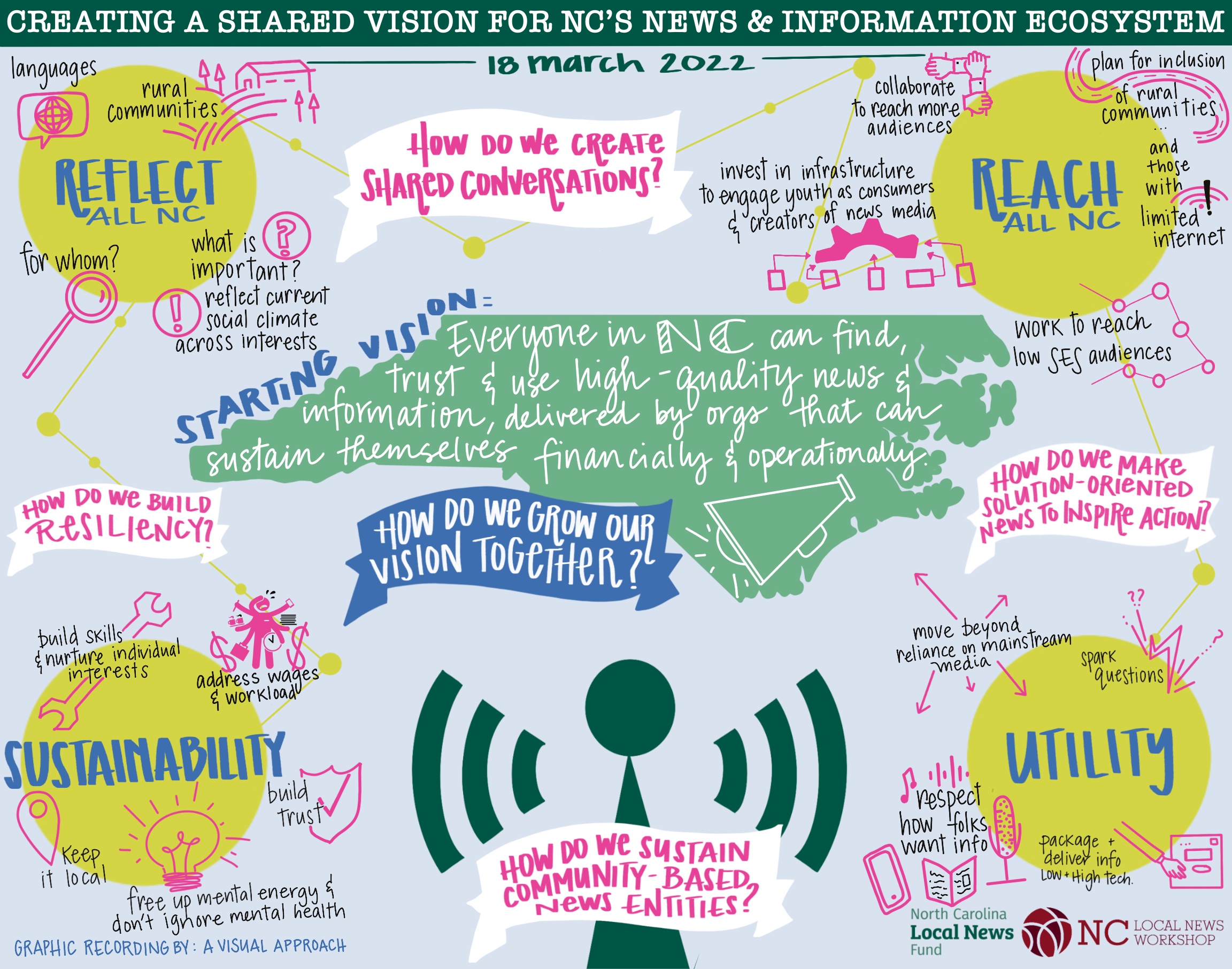 Check out the full NC Local newsletter for more from the Workshop, including industry news, job postings and shout-outs to journalists statewide. Sign up to get NC Local in your inbox every Wednesday.

Last week, while attending the Independent News Sustainability Summit in Austin, I was struck by how many times someone mentioned North Carolina’s news and information ecosystem with admiration. When I introduced myself to new people or connected with old friends, I would hear them say something like:

And it’s true. We have a lot of great things in the works. I might be biased — OK, totally biased — but I’m going to take a moment to brag on all that’s going on in our state.

Check out the full NC Local newsletter from October 26 for more from the Workshop, including industry news, job postings and shout-outs to journalists statewide. Sign up to get NC Local in your inbox every Wednesday.

Time to go into your hurry-up offense. There’s a lot to do in the next 13 days.

That’s a slightly ironic metaphor, because of course, elections absolutely are not games. They’re the most important exercise of our rights in a free society, and the participants need solid information to inform their decisions, not political handicapping, rankings and predictions.

I asked several smart people for their advice on what folks in the news media in North Carolina need to be doing in the days remaining before voting ends November 8:

Coverage matters, and many people are just tuning in. Make it easy for them to get up to speed and offer help for those who have heard mostly partisan messaging as well as those who might not know beyond a couple of races.

Check out the full NC Local newsletter from October 19 for more from the Workshop, including industry news, job postings and shout-outs to journalists statewide. Sign up to get NC Local in your inbox every Wednesday.

Here’s a big boost for our news and information ecosystem:

The Kate B. Reynolds Charitable Trust has given $1.05 million to the North Carolina Local News Lab Fund. It’s the biggest gift ever to the Fund, which will send most of that money out in grants and use the rest to “reinforce our (operating) capacity,” Director Lizzy Hazeltine told me this week.

Since 2017, the Fund, backed by funders including the Kate B. Reynolds trust, has awarded more than $2.4 million in grants to what it calls “trusted messengers” — news and information providers and networks that build trust and connections in communities and “provide accurate, reliable news … despite having been historically excluded from traditional philanthropy due to racial and systemic inequities,” the gift announcement says.

Check out the full NC Local newsletter from October 12 for more from the Workshop, including industry news, job postings and shout-outs to journalists statewide. Sign up to get NC Local in your inbox every Wednesday.

Author’s note: Special thanks to Amanda Martin, general counsel to the North Carolina Press Association; Sarah Ludington, clinical professor of law and director of the First Amendment Clinic at Duke; and Christina Piaia, of the Reporters Committee for Freedom of the Press, for their help with this report.

Journalism in the public interest has become more challenging in the past few years for several reasons. The two main ones: Cash-strapped newsrooms often can’t afford the legal help they need to do meaningful investigative and accountability reporting, and a culture of government secrecy is growing.

Fortunately, there’s help on both fronts. With the expansion this fall of the Protecting Journalists Pro Bono Program (ProJourn), administered by the Reporters Committee for Freedom of the Press, there are four main ways for journalists and newsrooms in North Carolina to get pro bono legal assistance:

Read moreThe law on your side

Check out the full NC Local newsletter from October 5 for more from the Workshop, including industry news, job postings and shout-outs to journalists statewide. Sign up to get NC Local in your inbox every Wednesday.

Happy Hispanic Heritage Month! Hispanics are one of the fastest-growing populations within the United States, and about 1 million North Carolina residents identify as Hispanic and/or Latinx. However, few news organizations around the state directly serve the Hispanic community with stories and resources.

Enlace Latino NC, founded in 2018, is the first Spanish digital-only media organization in North Carolina. Founded to close the information gap in the Latinx community, it boasts a website, a podcast, a radio show, and four newsletters that target the different rural and urban Spanish-speaking communities within the state.

During my discussion with Paola Jaramillo, the executive director and founder of Enlace Latino, she stressed the importance of collaboration with other news organizations around the state. Not only does collaboration boost awareness of Enlace, partnerships normalize accessibility for those who are non-white or multiracial.

Check out the full NC Local newsletter from September 21 for more from the Workshop, including industry news, job postings and shout-outs to journalists statewide. Sign up to get NC Local in your inbox every Wednesday.

Like you, I was inspired by the success last Thursday of the first U.S. Democracy Day, a nationwide collaborative reporting project to focus attention on the crisis in American democracy, and to inform and empower citizens to address it. The project was coordinated by leaders at the Center for Cooperative Media, News Revenue Hub, Hearken, and the Institute for Nonprofit News.

All of the work is showcased online. You can still add something you produced (published or unpublished), using the links provided there, and also submit work that can be republished by others. And you can thumb through the #DemocracyDay tag on Twitter.