A new report by Imagining the Internet and Pew Research examines ways to improve digital platforms and build a better online world.

Researchers at Elon University’s Imagining the Internet Center and the Pew Research Center asked more than 400 technology innovators, developers, business and policy leaders, researchers and activists to imagine a better world online and describe the improved internet they would like to see by 2035. Their responses were woven into a 108-page report revealing a wide range of future visions. 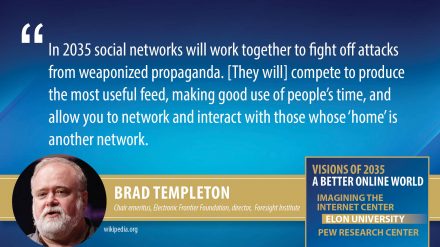 “These experts said they hope for a ubiquitous – even immersive – digital environment that promotes fact-based knowledge,” said Janna Anderson, director of Elon’s Imagining the Internet Center, a co-author of the report. “By 2035 they hope to see a better defense of individuals’ rights online, the further empowerment of diverse voices, and more-focused implementation of emerging tech tools to help solve the world’s wicked problems.”

Lee Rainie, director of Pew Research Center’s internet and technology research and a member of Elon University School of Communications Advisory Board, is a co-author of the report. “Many of these experts urged that the most-powerful tech companies should invest more resources into improving the most-popular online platforms,” he said, “shaping them to encourage more-civil civic participation and retooling their algorithms to highlight pro-social activities.'” 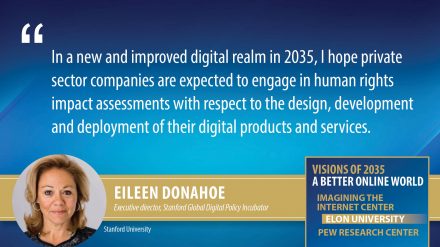 Additional enhancements these experts said they hope to see by 2035:

Common themes echoed across these experts’ responses were their hopes for:

Building better spaces – Many hope for redesigned and new digital platforms that codify better norms for discourse and facilitate open, honest conversations and hope that: people will have control over their data and their relationships with commercial and other entities; interoperable systems will allow people to move seamlessly from digital public space to space; artificial intelligence (AI) will play a greater role in isolating bad actors and encouraging positive connections; government-and-public-funded “public media” spaces will arise; big social media firms will be regulated.

Constructing effective communities – They look for digital communities that focus on collecting, organizing, publishing and archiving useful, reality-based knowledge; inspire healthy debates that build trust in the knowledge they generate; feature AI that helps usefully organize the input of humans; clamp down on divisive anti-social contributions that dampen public participation in democracy; help serve to diminish social inequalities; and build a global culture of lifelong education built around people supporting each other’s growth. 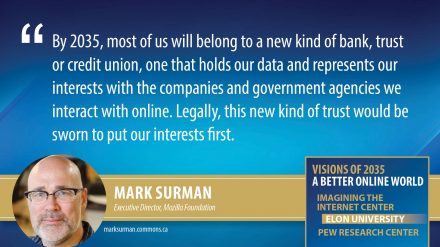 Empowering individuals – They hope for a future in which the trust people invest in each other and organizations is enabled by tech tools, including: blockchain; localized mesh networks; digital passports; digital “credit unions” that facilitate interactions; supportive AI and bots; privacy “nutrition labels” for online activities; encryption; data cooperatives; simple language translation interfaces; and the creation of “digital twins” that can help people be more productive.

Changing economic life and work – Many experts mentioned the benefits they expect better digital spheres might bring to economic development and people’s transition into new kinds of work.

Altering “reality” – Some focused on the transformative potential of AI, VR and AR, saying these enhancements will have growing impact on everything online and in the physical world. They salute the possibilities inherent these but worry they can be abused in ways that are yet to be discovered.

Tackling wicked problems – Some said many of humanity’s grand challenges (climate change, advancing human rights, addressing global health issues) will begin to be solved in the next decade thanks to new digital technologies.

The full report features a 108-page selection of the most comprehensive responses shared by the hundreds of thought leaders invited to participate in the nonrandom sample. Following is a small selection of excerpts from among the experts’ statements:

“In 2035 social networks will work together to fight off attacks from weaponized propaganda. [They will] compete to produce the most useful feed, making good use of people’s time, and allow you to network and interact with those whose ‘home’ is another network.”

Greg Sherwin, a leader in digital experimentation with Singularity University

“Information is increasing exponentially and our ability to process it fails to scale. This leads to gross oversimplifications of people, their conditions, their ideas, their perspectives. I envision the creation of exploratory worlds that help people build better understanding and empathy.” 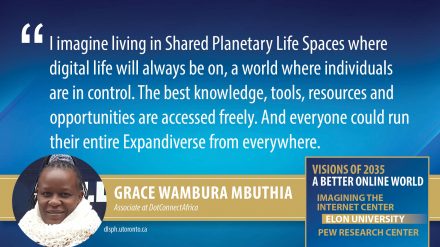 “I imagine living in Shared Planetary Life Spaces where digital life will always be on, a world where individuals are in control. The best knowledge, tools, resources and opportunities are accessed freely. And everyone could run their entire Expandiverse from everywhere.”

“By 2035, most of us will belong to a new kind of bank, trust or credit union, one that holds our data and represents our interests with the companies and government agencies we interact with online. Legally, this new kind of trust would be sworn to put our interests first.”

“In a new and improved digital realm in 2035, I hope private-sector companies are expected to engage in human-rights impact assessments with respect to the design, development and deployment of their digital products and services.”

“Misinformation, online harassment, etc., will not go away … Companies, pressured by public outcry, will be developing more features that incorporate reflective design. They will realize that deep learning still is not able to ‘fix’ the problem of disinformation and harassment.”

“Someday we’ll cease to differentiate between on- and offline, just as we have stopped talking about ‘electrified’ life. Much that we now treasure will disappear. But the human spirit is creative and playful—we’ll be up to new augmented shenanigans that we cannot now imagine.”

“Details of change can be hard to decide. With practically everyone connected via the internet, the solution may be tens or hundreds of thousands of citizen groups each focusing narrowly on one slice of one issue, yet interacting also with other groups dealing with connected concerns.”

“The improved digital realm of 2035 is one in which the Web still works but has been sidelined because there are better models on the Internet for people and organizations to get along, and better technologies than can be imagined inside the client-server model.”

“People will learn while they work, not only in a burst at the beginnings of their longer lives. Data will inform policy decisions, and powerful processing tools will analyze and provide useful guidance. We will solve the problems of maintaining common healthcare records.”

“The distinction of facts from opinions would help reduce the propagation of misinformation and disinformation. This fundamental change will improve our physical and mental health, as well as bring social, economic and political benefits.”

“Humility and a sense of inquiry are the only protection we have in exploring life enhanced, enriched and endangered by the vastly and rapidly expanding digital dimension. Digital Humanism is urgently needed as a counterweight to Digital Colonization driven by profit.”

“Vastly improved compute and network facilities will accelerate the quantity, quality and availability of the data on which science makes its advances. It will be instantly available to all in an understandable and reusable form, with essentially unlimited storage and compute power.”

Alumni: Get ready for the Welcome to the City 2022 event series

From late August through October, alumni across the country will have the chance to connect at Welcome to the City events hosted by their local alumni chapters.