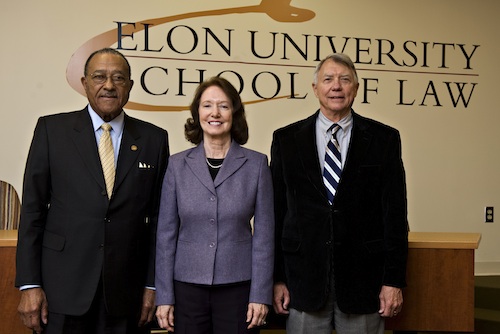 Read a report on the 2021 competition won by a team from Michigan State University College of Law.

Elon University School of Law hosted the first Billings, Exum & Frye National Moot Court Competition in 2011, and every year since, between 30 and 50 teams from dozens of law schools have competed in our program.

Because the competition seeks to honor as many students as possible for their achievements in advocacy, numerous awards are presented for the best team performances (quarterfinalists, semifinalists and finalists), best briefs (best two petitioner and respondent briefs), and best oral advocates (top three in preliminary rounds and best in final round). The championship team’s name will be engraved on the Chief Justices’ Cup which is permanently displayed at Elon Law. The winning law school receives a replica of the Chief Justices’ Cup that it may keep and display at its own school. Each member of the championship team also receives a plaque commemorating the achievement.