The Phoenix look to improve on last season's 6-5 campaign, beginning with a visit to Vanderbilt on Sept. 3.

The Colonial Athletic Association (CAA) today released 2022 schedules for all 13 league teams. The Phoenix is set for an 11-game campaign, with five home games, including eight conference contests in the restructured CAA Football.

The league welcomes Hampton University and Monmouth University to the conference with the departure of James Madison University. The Phoenix will travel to Hampton to close the regular season on Nov. 12.

Elon’s schedule includes a trip to FBS opponent Vanderbilt, non-conference games against long-time rivals Wofford and Gardner-Webb, and eight CAA Football contests. The Phoenix will have three home games in October and another in November, playing in each of the first 11 weeks of the season. Elon will have a bye on the final week of the regular season.

“We return a good mix of experience and youthful talent,” said Elon Football Head Coach Tony Trisciani, beginning his fourth season at the helm. “We will be tested early as our first two games are on the road against SEC opponent Vanderbilt and Southern Conference power Wofford. Playing eleven straight games will be a challenge and we will have to manage the volume and intensity of our practices to keep our players healthy and prepared later in the season. Our goal is to win one game a week and be in position to contend for a CAA Championship and NCAA playoff spot in November so that we can take full advantage of our week 12 bye.”

Season tickets are currently on sale and they provide Elon fans with the best value, benefits and seats. As a season-ticket holder, fans are guaranteed the same seat for all five home games at the lowest price possible, along with email updates, season ticket member entrance lines and more.

Season tickets begin as low as $40, with faculty and staff receiving 50 percent off of season tickets in zones 2 and 3. Phoenix Club seating and hospitality are available in zones 1 and 2. To inquire about these seats, contact the Phoenix Club at (336) 278-6750 or email rdiver@elon.edu.

Season Parking Passes for the 2022 season will go on sale to Phoenix Club supporters starting June 1. Please note that access to these opportunities is based on giving status to the Phoenix Club for the 2022-2023 membership year (June 1 – May 31). For questions or inquiries about this process, please feel free to contact the Phoenix Club at (336) 278-6781. A guide to parking at Rhodes Stadium can be found on the Elon Athletics website. 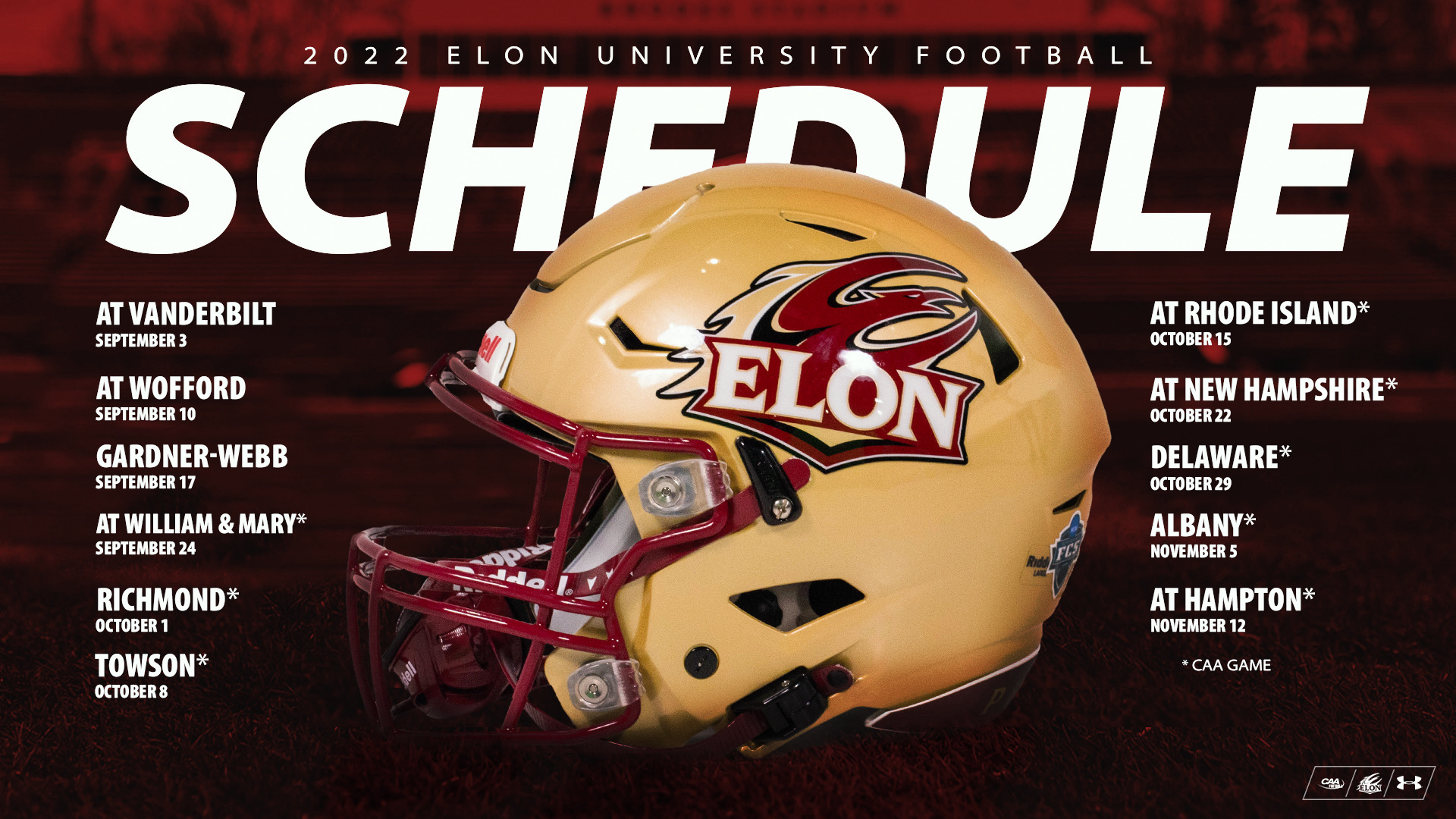 Game times for all contests will be announced by CAA Football at a future date. The full schedule and description of each matchup is below. Bold denotes a home game.

Elon opens the season by playing at Vanderbilt. This will be the second all-time meeting between the two programs with the Commodores earning a 45-14 home victory on the same date in 2011. Although the Phoenix plays an FBS opponent yearly, Vanderbilt is the only member of the Southeastern Conference (SEC) which Elon has faced. Elon is still searching for its first win over an FBS opponent in program history. Vanderbilt went 2-10 in the 2021 season, picking up victories over Colorado State and UConn. They are coached by Clark Lea, in his second year leading the program.

Former conference rivals, Elon and Wofford will meet in a non-conference game for the second consecutive season. Wofford holds a 28-11 lead in the all-time series, including a 24-22 victory in the season opener in 2021. In fact, the Terriers have won the past six head-to-head contests since the Phoenix picked up a 34-6 win in 2009. Wofford went 1-10 in 2021 and is led by Josh Conklin, who is 19-22 in four years at the helm.

Who can forget the Family Weekend shootout last fall when William & Mary edged the Phoenix 34-31 despite 384 passing yards from Davis Cheek? That win gave The Tribe a 5-2 edge in the all-time series, although Elon bounced back with three straight victories and finished third in the final CAA Football standings, a game ahead of William & Mary. Elon has not beaten The Tribe since being ranked No. 17 and posting a 25-17 win in 2017. The only Phoenix win in Williamsburg came in 2016 as Elon upset No. 8 William & Mary 27-10. It will be the third time that the teams have faced off in the conference opener. William & Mary went 6-5 (4-4 CAA Football) in 2021 and is coached by Mike London. He is 12-14 in three years leading The Tribe and has a career record of 74-74 with head-coaching stops at Richmond, Virginia and Howard.

With a 20-7 win at No. 22/21 Richmond in the fall, Elon closed the gap in the all-time series at 9-4. In fact, 10 of the 13 all-time meetings between the two programs have seen one of the two teams ranked at the time of the contest. In a rarity that may never be seen again, the two teams played each other three times during the calendar year, as Richmond picked up two wins in the spring 2021 season. Elon’s last home win over Richmond came in 2018 as the Phoenix was ranked No. 11 and earned a 38-28 victory, but that is Elon’s only home victory over the Spiders. In fact, the visiting team has won eight of the 13 meetings in the series. Richmond went 6-5 (4-4 CAA Football) in 2021 and is coached by Russ Huesman. He is 24-25 in five years at Richmond and 83-62 overall, going 59-37 in eight years at Chattanooga.

Elon dominated Towson on the road in 2021, securing a 37-14 victory that brought the all-time series closer at 6-4. The Phoenix has won the last two meetings but Towson won the last contest inside Rhodes Stadium, a 41-10 victory between a pair of ranked teams in 2018. Combined with the Richmond game a week earlier, Elon will look for its first victory on the back end of back-to-back home games since beating Rhode Island 24-21 in 2018 in the second game of a three-game homestand. Towson went 4-7 (3-5 CAA Football) in 2021 and is coached by Rob Ambrose. He is 66-64 in 12 years at Towson and 69-71 overall, going 3-7 in one year at Catholic University.

With a 43-28 win over No. 25 Rhode Island in the 2021 season finale, Elon improved to 4-1 all-time against the Rams. Elon, in fact, has won four in a row including a 35-34 victory in 2017 in the only meeting between the two programs in Kingston, R.I. In the most recent victory, the Phoenix dominated in the trenches. Elon held Rhode Island to just 44 yards on the ground (2.1 yards per carry), while the Phoenix racked up 146 yards rushing. Elon scored on every possession that was not halted due to the end of the half. Rhode Island went 7-4 (4-4 CAA Football) in 2021 and is coached by Jim Fleming. Fleming is 24-58 in eight years at Rhode Island and 45-59 overall, combined with a 21-1 mark in two years at Sacred Heart.

Elon shut down the New Hampshire offense in a 24-10 home victory this fall but the Wildcats still lead the all-time series 5-2. The Phoenix is winless in three trips to Durham, New Hampshire and has scored just 30 points in those three contests. Elon, though, has won two of the past three meetings between the squads and will look to use that momentum to get that first road victory. In the most recent meeting, Davis Cheek earned National Player of the Week honors after going 27-of-31 for 328 yards and two touchdowns. The defense held New Hampshire to only 71 yards of offense in the second half. New Hampshire went 3-8 (2-6 CAA Football) a year ago and will be coached by first-year mentor Rick Santos. He went 6-5 as interim head coach at New Hampshire in 2019.

Elon and Delaware have not squared off since 2019, a 42-7 Phoenix victory that was the first win for the program in four tries. The Blue Hens entered that contest ranked No. 15 nationally but Elon rolled to the five-touchdown victory. In two of the previous four meetings, one of the two teams entered the contest ranked but finished with a loss. Elon will look for its first-ever win in three tries in Newark, Delaware. The Blue Hens went 5-6 (3-5 CAA Football) a year ago and will be led by first-year head coach Ryan Carty, a former Delaware quarterback and offensive coordinator at Sam Houston State.

Elon and Albany have not played since 2017 and have met just two times previously. Each team has earned a home victory with Elon winning the most recent contest, 6-0 over No. 19 Albany in 2017. That game marks the last time the Phoenix defense pitched a shutout, as Elon held the Great Danes to just 224 yards of offense and forced a pair of interceptions. This contest will be the final home game of the regular season for Elon, a tricky contest for the Phoenix historically. In 2021, Elon beat No. 25 Rhode Island 43-28 to snap a streak of 10 straight losses in the final regular season home game of the year. Albany went 2-9 (2-7 CAA Football) a year ago and is coached by Greg Gattuso, who is 35-52 in eight years at Albany. He has an all-time record of 132-84, which includes a record of 97-32 in 12 years at Duquesne.

Elon closes the season on the road against the only team on its schedule it has never faced – the Hampton Pirates. Hampton jumps from the Big South Conference to CAA Football coming off of a 5-6 season that saw the team go 3-3 at home. The Pirates have not faced a current member of CAA Football since dropping a 24-14 contest to William & Mary in 2016, then as members of the MEAC. Hampton went 5-6 (3-4 Big South) in 2021 and is coached by Robert Prunty, who carries a 17-16 career record in three years coaching the Pirates.