The Research Working Group, including Jessie Moore, Tim Peeples, Joan Ruelle, and Maureen Vandermaas-Peeler, was charged with defining mentoring in the Elon context. The “definition package” comprises an interrelated set of materials that offer context for the conceptual framework of mentoring constellations. Considering each of the materials in relation to the other components of the definition package is critical for developing a full picture of mentoring at Elon.

We began by identifying and reviewing a core set of resources on mentoring, focusing on comprehensive literature reviews of definitions, conceptual frameworks, characteristics and functions of mentoring and other developmental relationships, and studies in higher education. After a collective review of the core resources, all of which conclude that there is not one accepted definition of mentoring, we each began drafting a definition to fit Elon’s context. We engaged two students as partners in this work, Alanis Camacho-Narvaez and Jordan Young, who also reviewed core resources and wrote definitions. We compared our definitions, scrutinized them against the literature to identify overlaps and omissions, and spent the next few months reviewing and refining a short definition as well as accompanying materials in this definition package. We obtained extensive feedback in multiple meetings with others in the campus community (including a campus-wide conversation) and revised accordingly.

The definition package developed by the Research Working Group includes the following (described in more detail in the final report on pages 35-50):

A Definition of Mentoring Relationships in the Elon Context 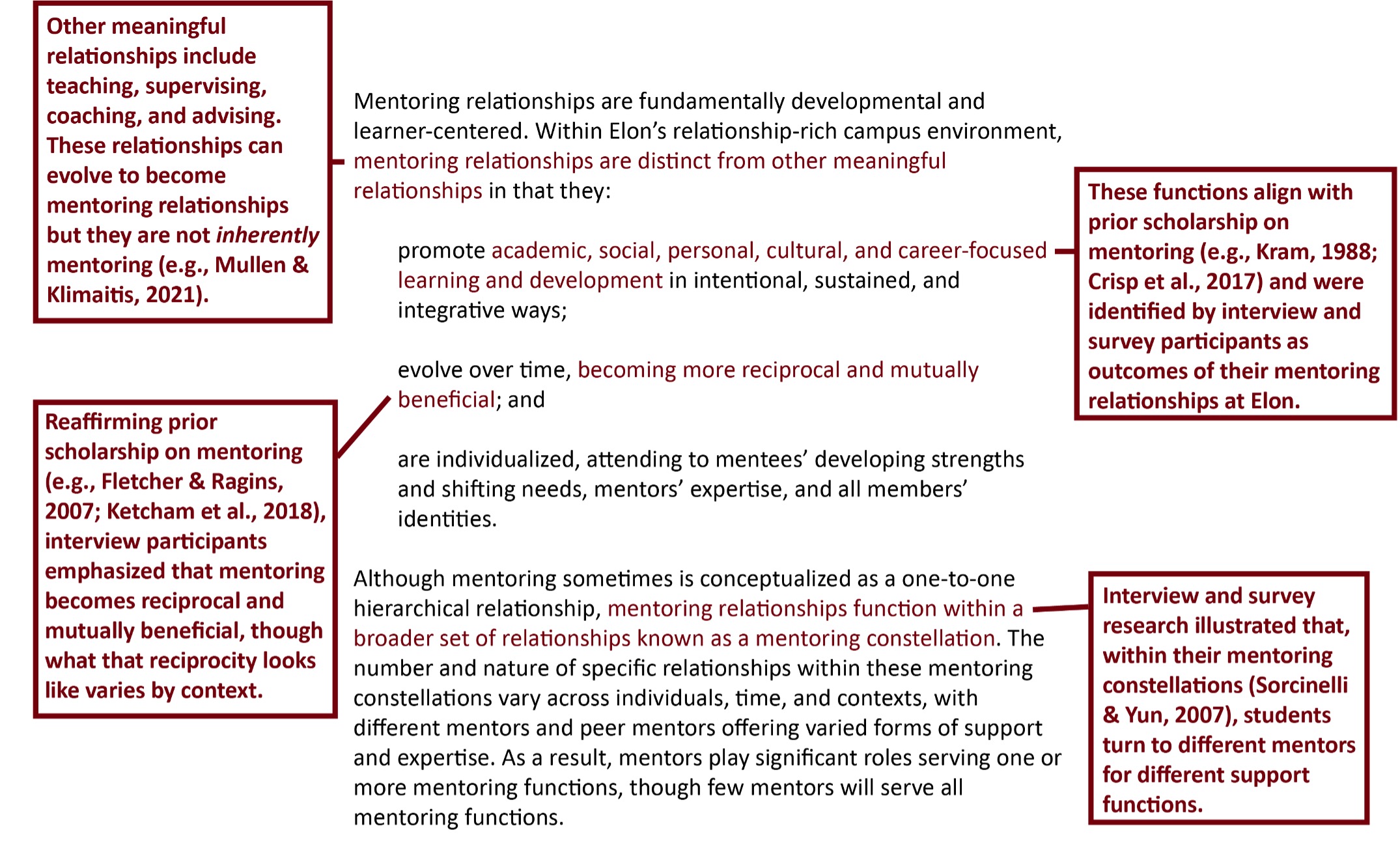 Mentoring has gained prominence in higher education as a critical component of student success during and after college. Benefits of mentoring relationships include enhanced personal and professional learning and development, as well as greater engagement at work and increased well-being post-graduation (Gallup Inc., 2014; Vandermaas-Peeler et al., 2018). The role of effective, high-quality mentoring has received significant attention with the increasing emphasis on students’ participation in high-impact practices designed to facilitate cumulative learning and engagement. Mentoring has been linked to a variety of academic outcomes such as persistence and grades, as well as developmental outcomes contributing to students’ academic success such as college adjustment (Crisp et al., 2017). Although seldom studied, there are also benefits for mentors in higher education, including personal satisfaction and fulfillment, professional rejuvenation, and networking (Johnson, 2016). Eby et al. (2008) suggest a developmental lifespan approach to the study of why mentoring matters, to understand the full breadth of mentoring benefits.

What, exactly, does high-quality mentoring entail? Despite over four decades of research on mentoring, there is no universally accepted definition (Mullen & Klimaitis, 2021). Ubiquitous use of the term has not only created definitional and conceptual confusion, but also an “intuitive belief” that mentoring is a panacea for a wide array of personal and professional challenges in a multitude of settings (Eby et al., 2010, p. 7). Without a clear definition, our understanding of what it means to be a mentor becomes obfuscated.

The lack of clarity about the definition and key characteristics of mentoring stems in part from the complex and overlapping nature of developmental relationships in higher education. Indeed, being a mentor is often conflated with other student- and learning-centered relationships such as advising, coaching, tutoring, and supervising, among other roles. To avoid this confusion, Johnson (2016) suggested that mentoring relationships be considered along a continuum rather than as a distinctive category. He encouraged a shift in thinking about mentoring such that “Mentoring is not defined in terms of a formal role assignment, but in terms of the character and quality of the relationship and in terms of the specific functions provided by the mentor” (p. 28). 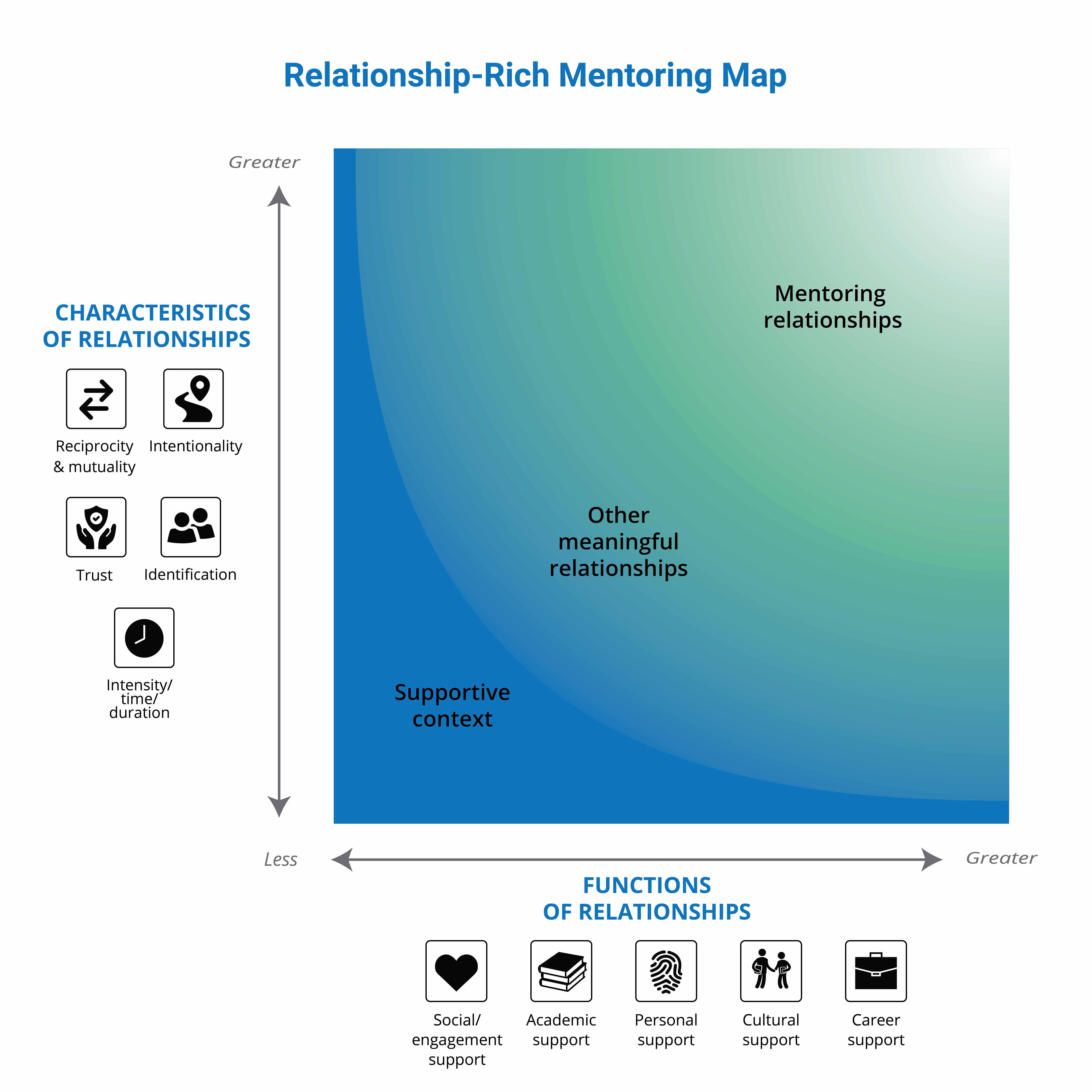