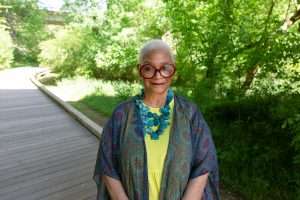 The Ninth Poet Laureate of North Carolina appointed in 2018, is the first African-American and third woman to be appointed as the North Carolina Poet Laureate and reappointed in 2021 for a second term by Governor Roy Cooper. She is a 2019 Academy of American Poet Laureate Fellow, 2014 NC Literary Hall of Fame Inductee, 2009 NC Piedmont Laureate appointment, 2003 recipient of the North Carolina Award for Literature. Jaki Shelton Green teaches Documentary Poetry at Duke University Center for Documentary Studies and the 2021 Frank B. Hanes Writer in Residence at UNC-Chapel Hill. Additionally, she received the George School Outstanding Alumni Award in 2021. Her publications include: Dead on Arrival, Masks, Dead on Arrival and New Poems, Conjure Blues, singing a tree into dance, breath of the song, published by Blair Publishers. Feeding the Light, i want to undie you published by Jacar Press, i want to undie you English /Italian bilingual edition published by Lebeg Publishers. Juneteenth 2020, she released her first LP, poetry album, The River Speaks of Thirst, produced by Soul City Sounds and Clearly Records and released a CD, i want to undie you in 2021. Jaki Shelton Green is the owner of SistaWRITE providing writing retreats for women writers in Sedona Arizona, Martha’s Vineyard, Ocracoke North Carolina, Northern Morocco, and Tullamore Ireland. 2021, The Arts Club of Chicago premiered a commissioned body of work in collaboration with Flutronix for the Black Is Series. April 2022, the poem will be performed by Flutronix and the Cincinnati Symphony Orchestra. 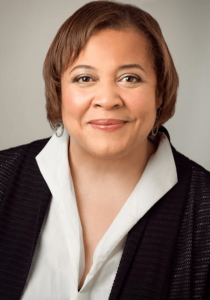 Creating a Black Future through Media and Social Change

Cunningham works on the Diversity Alumni Task Force, Office of Program Development and the Newhouse Network Board of Directors at Syracuse University; she’s also on the National Board for Elon University’s Communications School. She completed these programs VIACOM’S RISING STAR THRIVE, CTAMU’s Executive Leadership Program at Harvard Business School, and the NAMIC Executive Development Leadership Program at UCLA’s Anderson School of Management. 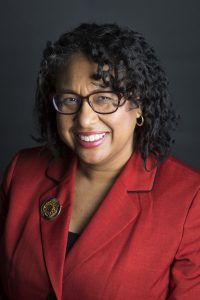 In June 2018, Rochelle L. Ford, Ph.D., APR, became the dean of the School of Communications at Elon University, with about 1300 students majoring at the undergraduate level in strategic communications, media analytics, journalism, sport management, communication design, and cinema and television arts and in corporate communications, organizational analytics, and interactive media at the graduate level. From 2014-2018, she was a tenured professor and the chair of the Public Relations Department in the S.I. Newhouse School of Public Communications at Syracuse University, responsible for all undergraduate and graduate public relations programs at this PRWeek top-ranked university. She also served as a Provost Faculty Fellow at Syracuse University responsible for co-chairing the University’s Middle States Accreditation process and implementing aspects of the Academic Strategic Plan. Having served as a faculty member at Howard University for 16 years, Dr. Ford has mentored hundreds of African American public relations professionals and championed the diversity agenda within the public relations industry through her research, grants, teaching, and service. She is the co-editor of a two-volume book series through IGI Global about the sustainability of Historically Black Colleges and Universities. In August 2014, she was inducted into Arthur W. Page Society and completed, with grant funding from the PRSA Foundation, an award-winning research study about diversity and inclusion best practices at Page Society member organizations.

A nationally sought-after speaker, she has given hundreds of special presentations on multicultural communications and diversity, coordinated a series of teleconferences and podcasts on diversity and inclusion, and served as a Fulbright Specialist in the Gambia West Africa. Dr. Ford has established and has written a monthly column “Diversity Dimensions” for Public Relations Tactics, an award-winning trade newspaper. Her scholarship on diversity has appeared in the New York Times, book chapters and refereed business and communication journals. She has received the Public Relations Society of America National Capital Chapter’s Diversity Champion Award, PRSA’s national D. Parke Gibson Multiculturalism Award for pioneering work in diversity in public relations, The Plank Center for Leadership in Public Relations’ Milestones in Mentoring Award and the National Black Public Relations Society’s Founders Award. She attended Howard University (BA ’93), University of Maryland at College Park (MS ’95), and Southern Illinois at Carbondale (PHD ’99). She holds a graduate certificate in higher education administration from Harvard and in gerontology from University of Maryland. She is the mother of two sons, Michael and Malik Larkin, and a daughter, Raven Ford.