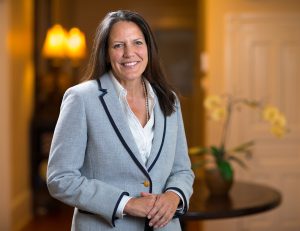 Dr. Constance “Connie” Ledoux Book is a passionate advocate for higher education and its power to transform students’ lives. She spent 16 years as an Elon faculty member and administrative leader, helping to build the university’s reputation for excellence in engaged teaching and learning. In 2015 she accepted a groundbreaking role as the first female provost and chief academic officer at The Citadel, the Military College of South Carolina. Following her impressive accomplishments there, she returned to Elon as president in 2018, bringing a deep appreciation for the university’s unique history and its rapid rise to national prominence.

Under President Book’s leadership, Elon has been reclassified as a Doctoral/Professional university and made its debut among the top-100 National Universities in U.S. News & World Report Best Colleges rankings. In 2022, Elon was named by U.S. News as the #1 national university for excellence in undergraduate teaching, and for seven straight years Elon has been ranked as the nation’s leader in the eight academic programs that “focus on student success.” Elon is also ranked in the top-10 for innovation, and in 2021 Princeton Review named Elon the nation’s #1 “Best-Run” university.

In 2020, President Book led creation of the 10-year Boldly Elon strategic plan to advance the university’s national leadership in experiential education, mentoring and student success. The number of full-time faculty positions has grown and innovative new academic programs have been established in engineering, nursing, science and technology. There are many new investments in health and wellness programs, as well as professional development for faculty and staff and lifelong learning opportunities for alumni to connect with the university and network with each other.

Boldly Elon also expands the university’s commitment to diversity, equity and inclusion, with enhanced curriculum, updated policies and expanded recruitment of diverse students, faculty and staff. In addition, there are many new initiatives to create new connections to the local community through partnerships with public schools, development of a regional business incubator and creation of a thriving Town of Elon.

Many new facilities have opened during Book’s presidency. Additions to the campus include Schar Center (a 5,000-seat convocation center and sports arena), the Sankey Hall classroom building, Koenigsberger Learning Center, East Residential Neighborhood, LaRose Student Commons, and the Inn at Elon, an on-campus hotel. In 2022 Elon will open the first phase of the Innovation Quad, providing two new buildings for engineering and sciences. The continued development of the campus, which has grown by 40 acres during Book’s time in office, is being guided by an updated university master plan.

In addition to leading Boldly Elon initiatives, Book is also working to complete the public phase of the $250 million Elon LEADS comprehensive campaign, which she kicked off in 2019. Through the generosity of more than 25,000 members of the extended Elon community, the university has added more than 100 new endowed scholarships; increased resources for students, faculty and programs; and endowed the Dr. Jo Watts Williams School of Education with support of the largest single gift in Elon history. 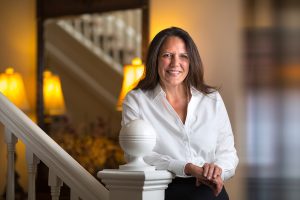 Book has provided strong and steady leadership during the COVID-19 pandemic. With a strong commitment to in-person classes, Elon resumed to face-to-face instruction in Fall 2020 and carried out two academic years of effectively managing the virus and mitigating community spread through campus testing, quarantining and vaccination campaigns. In responding to the ongoing national reckoning on social justice issues, Book created the new Division of Inclusive Excellence, with an agenda of action steps to create a more welcoming and equitable community.

Book was named Elon’s ninth president after serving three years as provost of The Citadel. She was the first female provost and dean in The Citadel’s 175-year history and served as the second-ranking official at the college, responsible for all academic functions. As Provost, Book deepened shared governance through the establishment of The Citadel’s first faculty senate and a redesign of the core curriculum. She also launched an office for study abroad and The Citadel in Washington, D.C., program; developed new programs and grants for undergraduate research; launched new degrees in mechanical engineering, nursing and cyber security; and advanced leadership studies for all students. Book also led development of online graduate programs to serve military and federal employees across the country, leading to record growth of The Citadel’s graduate college.

Book embraced her historic position at The Citadel, which admitted its first female cadets in 1996. With her support, the institution reached record enrollment for African-American, female and Latino first-year students. Book received the Dr. Martin Luther King Jr. Humanitarian Award from The Black History Intercollegiate Consortium in recognition of her contributions to the Charleston, South Carolina, community and The Citadel.

As an advocate for access to education at all levels, Book is the incoming vice chair of the National Association of Independent Colleges and Universities (NAICU), a member of the board of directors of the North Carolina Independent College and Universities (NCICU), the Colonial Athletic Association’s representative on the NCAA Division I Presidential Forum, and a member of the President’s Council of the Mary Christie Institute.

Locally, she has formed strong partnerships and joint initiatives with the Alamance-Burlington School System and Alamance Community College (ACC). In 2021 she led creation of the Alamance Scholars Program, providing an educational pathway from high school, to ACC, to Elon University for students who wish to pursue careers in education and have guaranteed employment after graduation as teachers in local schools.

Book was named to the inaugural list of top North Carolina leaders in Business North Carolina’s “Power List 2021.” She is a board member for the Piedmont Triad Partnership and has been honored as one of 40 “Outstanding Women in Business” and one of the North Carolina Triad region’s “Power Players” by the Triad Business Journal.

Book joined Elon’s faculty as assistant professor of communications in 1999, teaching courses in new media, broadcast policy, news writing, research and production. She was department chair from 2004 to 2006, when she was named associate dean of the School of Communications. Among her responsibilities were the school’s accreditation, faculty development, growth of the internship program, the school’s advisory board and the establishment of the Elon in Los Angeles and the Elon in New York City programs.

In recognition of her dedication to student engagement and success, she received Elon’s 2009 Ward Family Excellence in Mentoring Award.

Book served as Elon’s faculty fellow for strategic planning from 2008 to 2010, coordinating a two-year process of creating the university’s Elon Commitment strategic plan with input from hundreds of university stakeholders. During five years as associate provost, Book spearheaded the redesign of career services programs and the establishment of the Student Professional Development Center, setting Elon on course to enhanced internship opportunities, higher job placement levels and significantly higher starting salaries for graduates. She also oversaw creation and implementation of the residential campus plan, enrichments to Elon’s digital learning opportunities, development of the Study USA program and growth of civic engagement initiatives.

Book comes from a large Louisiana family. Her grandparents were farmers and her parents were deeply committed to education, instilling in her a deep belief in personal growth and development. She earned her doctorate from the Grady College of Journalism at the University of Georgia, a master’s degree in education administration and supervision from Northwestern State University (Louisiana) and a bachelor’s degree in journalism from Louisiana State University.

An active scholar, she is the author of “Digital Television: DTV and the Consumer,” the first book dedicated to understanding how the transition from analog to digital television impacted consumers. She has appeared on panels at the Federal Communications Commission, the National Cable Television Association and the National Association of Broadcasters.

The North Carolina Association of Broadcasters recognized Book with an Outstanding Service and Leadership Award in 2009 for her assistance with the state’s transition to digital television. She testified before the U.S. Senate Commerce Committee on the DTV transition in 2008 and that same year received a leadership citation from the National Association of Telecommunications Officers and Advisors.

As a proponent of transparency in government and open public records and meetings, Book conceived, established and served four years as executive director of North Carolina’s Sunshine Center, housed at Elon, and served two years as a board member for the center’s sponsoring group, the North Carolina Open Government Coalition.

Book’s family includes her daughter, Bella Book, a graduate of Mount Holyoke College and the University of Michigan Law School; and her son, Joe Book, an Elon University graduate.