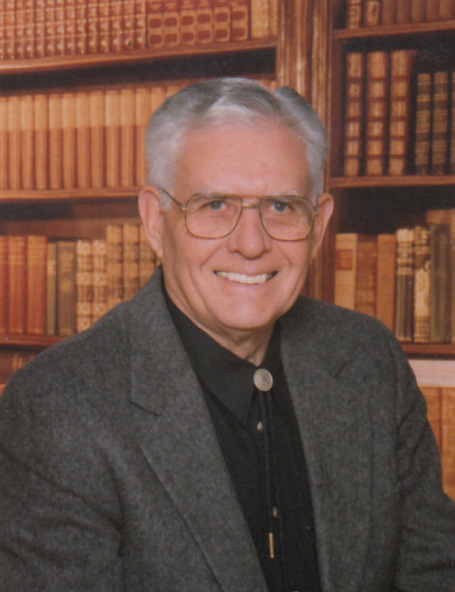 Elon retiree and Elon Medallion recipient William “Buster” Butler ’44 P’88 passed away on Tuesday, Aug. 4 at the age of 98.

Butler began his first period of employment at Elon as a student assistant in the business office and as a waiter in the dining hall. In 1946, Butler returned to Elon as Business Manager and Treasurer. He served in this role until his retirement 36 years later.

Butler received the university’s highest honor, the Elon Medallion, in 1996 from then-President Fred Young for his long-standing and meritorious employee service to his alma mater.

Butler also received a lifetime certification from the National Association of Purchasing Management, Inc. for his leadership.

After attending the U.S. Midshipman’s School at Notre Dame, he was commissioned as an ensign in the U.S. Navy Reserve. During amphibious training, he served on the USS-LSM-276 in the Asiatic Theater. There he was assigned as Communication Officer, Gunnery Officer and Ships Supply Chief Censor. He remained in this capacity until the end of World War ll. He achieved the rank of lieutenant after 14 years in the Navy Reserve after the war.

A dedicated and active participant in the local community, Butler was a member of the Elon Community Church, the Kiwanis Club of Burlington, the Alamance County Boy Scout Commission and the Board of Directors of the Burlington Chamber of Commerce.

Memorials can be made to The William E. “Buster” Butler, Jr. ’44 and Mary Griffin Butler ’49 Scholarship fund at Elon University, to Elon Community Church or the charity of one’s choice.

The Hon. Sam J. Ervin IV of the Supreme Court of North Carolina noted how “the courts are never going to be the same as they were before the pandemic” in a keynote address for an annual program hosted by the Elon Law Review.

The Office of Sustainability will host numerous events throughout the week to bring awareness to and inspire sustainable behavior change throughout campus.

The Phoenix have won three straight and have returned to the top tier of national rankings heading into Family Weekend.

Career Moves: Sophia Robinson ’22 reflects on the impact of the SPDC and CREDE in joining a purpose-driven company

Sophia Robinson left her hometown in North Carolina to begin her year in the Dominican Republic as a fellow at Yspaniola, working to provide high-quality education programs to local children.