Rönnlund, co-author of "Factfulness," spoke to the Elon community on Sept. 27 for the 2022-23 Common Reading lecture.

Anna Rosling Rönnlund is someone who sees the glass half full. Rönnlund, her father-in-law, Hans Rosling, and her husband, Ola Rosling, are the co-authors of “Factfulness: Ten Reasons We’re Wrong About the World – and Why Things Are Better Than You Think,” which argues that the world isn’t as bad as it seems and the rest of us would benefit from having the same optimistic outlook. 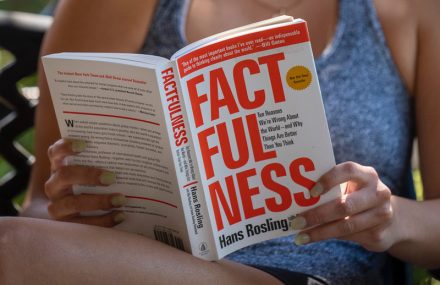 Even in the four years following the publishing of the book, which has seen the COVID-19 global pandemic, social injustice unrest, the war in Ukraine and financial crises, Rönnlund says that the book is a more helpful read today as we should be inspired by the “global cooperation” shown during these times.

“We have seen that the world has actually become more complicated in some ways,” Rönnlund said in the Common Reading lecture to the Elon community on Tuesday, Sept. 27.

“In the end of ‘Factfulness,’ we do have a segment called the ‘Five Global Risks,’ where we actually talk about the first one being a global pandemic. So, I would say that we wrote the book trying to have people realize that much has happened that has been better than people believe but we should be aware of the big global risks … so that we’re not just afraid of things without getting the context right.”

“Factfulness” was selected as the university’s Common Reading for the 2022-23 academic year and is being read by more than 2,000 Elon community members. The Common Reading program has been at Elon since 1992 and helps reinforce the core values of the institution for first-year students. These students will use the book in coursework throughout their first year at Elon.

President Connie Ledoux Book referred to the hopeful messaging of “Factfulness” in both her Opening Day and New Student Convocation addresses to signal what she feels to be a hopeful upcoming year.

“In both of those settings, I was able to use ‘Factfulness’ in a way that I believe sets an inspiration and hopeful tone that the data teaches us about how change looks in the world and that we can, and are changing, the world for better as we engage with each other in science, discovery and learning,” said Book, who co-moderated the conversation. “I was very appreciative of being able to start the year with those observations.”

Co-moderator Paula Patch, assistant director of first-year initiatives of the Elon Core Curriculum, asked Rönnlund which of the 10 “instincts” or “rules of thumb” – the misconceptions hardwired into most people’s thinking – are the most significant. Rönnlund said the two that would do the most to change someone’s way of thinking are the gap instinct and the negativity instinct.

“When you realize the gap instinct, you realize that we as humans tend to focus on the extremes, the outliers, the poor, the rich, the good and the bad and so on. But very often, we should focus on everything that is in between, because between those outliers we usually have the majority. And to understand the world, we need to look at the majority,” Rönnlund said.

Rönnlund explained that with the negativity instinct, people tend to focus on negative things because those are circulated more often and worry us.

“But there is a risk that when we don’t look at the long-time trends, we miss that over time humanity has achieved so many cool things,” Rönnlund said. “We have been able to achieve progress even though we used to have much less education than we have now. So, imagine what we can do from here even though we have all these obstacles.”

Rönnlund is also a co-founder of Gapminder, an independent educational nonprofit that has the goal of “fighting global misconceptions.” Since its founding in 2005, the organization has developed several innovative data visualizations and encourages fact-based decision-making in an ever-changing world.

“Trying to foster in ourselves a way of actually double-checking information before making decisions is going to be key,” Rönnlund said. “The world is not static. We need to find a way throughout life to continue to learn.”