Elon University sits on land that has a rich and storied history stretching back to American Indian tribes that became the first stewards of this area of central North Carolina. The roots of these people who were the first to call this land home and their long-standing and meaningful connection to this area are still visible today and essential to acknowledge.

Elon University strives to honor the legacy of the Siouan-speaking American Indian tribes who first lived in this area and the Occaneechi Band of the Saponi Nation (OBSN), which became the most prevalent by 1650. Members of the OBSN continue to live in this area today and carry forward their ancestors’ history, traditions, and love for this land. Learn more about the OBSN on its website.

In recognition of this long history and connection to this land, the OBSN adopted an official land acknowledgement in 2022 and Elon University joins with the OBSN tribal community in encouraging all to treat this land with the respect, love and care that their ancestors carried for this land.

The founding of Elon College in 1889 was predated by a rich regional history. Through many generations, Native Americans, early explorers and settlers lived in the area now known as Alamance County in central North Carolina. 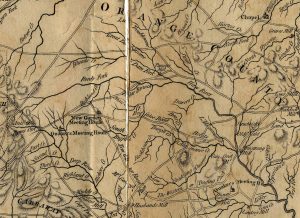 Not much is known with certainty about the Native Americans who lived in this area prior to visits by 17th-century European explorers (G. Troxler 1984, p.7). Archaeological and linguistic evidence suggests that several Native American tribes migrated to Piedmont North Carolina from the western part of North America several centuries before Columbus arrived in the New World. These small tribes shared a common culture and similar language (C. Troxler and Vincent 1999, p.20).

By the 1600s these Siouan-speaking tribes were building “villages of circular bark houses surrounding a central sweat lodge.” They subsisted by farming along rivers and creeks, fishing, hunting, and trading fur and deerskins (C. Troxler and Vincent 1999, p.20).

By around 1650 the Occaneechi were the prevalent Siouan-speaking Native Americans in southern Virginia and North Carolina. Twenty-five years later their numbers had been significantly reduced and concentrated west and south into what is now Alamance and Orange Counties. There the Occaneechi established a large village, called Achoneechy Town, on the Eno River near present-day Hillsborough (C. Troxler and Vincent 1999, p.22).

About the time of the American Revolution a group of Occaneechi migrated back into what is now northeastern Alamance County and formed a community referred to as Little Texas. This group has persisted in the area, joining with people from southern Alamance County to form the Eno-Occaneechi Indian Association (C. Troxler and Vincent 1999, p.23). Although this group is not federally recognized, in 2002 the state of North Carolina recognized the Occaneechi Band of the Saponi Nation as an official American Indian tribe (Recognized 2018).

Early explorers’ favorable descriptions of the American Indians in the area, of their hospitality, and of the bounty of the region, encouraged European settlers to move into what is now Alamance County and Orange County.
In 1670 German explorer John Lederer passed through the area and described the Oenock Indians near Hillsborough and the Shakory Indians near Swepsonville as “industrious to earn a penny.” These hard-working Native Americans would “hire themselves to their neighbors.” They were known to plant an “abundance of Grain” and could “reap three Crops in a Summer.”
Lederer found the government of the Native Americans to be “Democratick.” He observed that many Native Americans respected order and their elders, recording that the “Sentences of their old men are received as Laws, or rather Oracles” (C. Troxler and Vincent 1999, p.30–31). 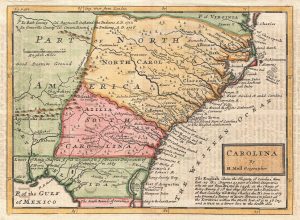 Lederer advised that assistance from the local Native Americans was essential for travel through the region. He insisted that an “Indian scout or two” must proceed before European travelers to search for food and other provisions, build shelters and guard against ambushes from other American Indians (C. Troxler and Vincent 1999, p.31).
In 1701 Englishman John Lawson traveled to Achoneechy Town after crossing the Hau-River, which was named after the Sissipahau American Indians living nearby. Lawson called the fertile land around the Haw River the “Flower of Carolina” and described it as “rich land enough to contain some Thousand Families” (C. Troxler and Vincent 1999, p.22).
Three main trading paths and several river fords used by Native Americans facilitated travel for early explorers and European settlers. Many of the Native American travel routes mirror the road patterns used today.
For example, Interstate 85/40 and the North Carolina Railroad that bisect Alamance County today follow the general route of the Greater Trading Path. This trading path twisted from Achoneechy Town to Mebane, forded the Haw River at Pine Ford (later called Trollinger Ford) near the present town of Haw River, and meandered near Graham and Burlington on its way to Guilford County and beyond (C. Troxler and Vincent 1999, p.28). 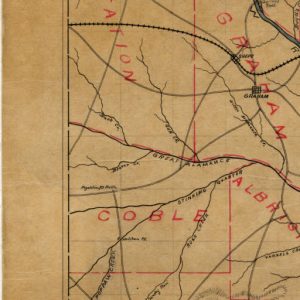 A map of the Alamance County area from 1879.

The first English titles to land in what became Alamance County were for prime tracts along the Haw River. They were granted to North Carolina boundary commissioners William Little, John Lovick and Edward Moseley. Colonial Governors Burrington and Everard also received large tracts of land. (C. Troxler and Vincent 1999, p.34)

In 1729 the Crown purchased the colony of North Carolina from all the Lords Proprietors except John Carteret, who became Earl Granville in 1740. The Granville Tract of land comprised “roughly the northern half” of North Carolina and included what would later become the Elon College campus.
Henry McCulloh, a land speculator, also claimed over a million acres of land in the area. McCulloh and his agents traveled the backcountry selling disputed land that was actually part of the Granville Tract. People frequently lived on these parcels of land for generations before any written evidence was recorded (C. Troxler and Vincent 1999, p.35–36). Consequently, it is difficult and often impossible to trace the ownership of a specific plot of land.

In 1752 the North Carolina colony legislature created Orange County, which included present-day Alamance County. This action was in part because of an influx of settlers from the eastern part of North Carolina, Virginia and Pennsylvania, which had led to a “veritable land rush” for the highly desirable and accessible land (C. Troxler and Vincent 1999, p.37).

In 1755 McCulloh and Granville agreed on a solution to the land-ownership confusion. By 1766 Henry McCulloh’s son, Henry Eustace, had registered some of the disputed land deeds in Orange County, but ownership of many more parcels remained in a state of confusion (C. Troxler and Vincent 1999, p.36).

In February 1818 the state of North Carolina deeded to Hugh Mulhollan, a prominent surveyor whose position allowed him to speculate with real estate, 511.75 acres on the “waters of Gun Creek, adj John Butler & others.” This large tract of land extended north to Cable family land and Osburn family land near the Shallowford community. It included land on which the future Elon campus would take root and grow (Orange County Register of Deeds 2018). 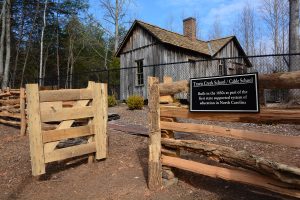 Forty years before Elon was founded, a publicly funded school for white students, later known as Cable School, was built in the 1850s adjacent to what would become the Elon campus. By the time the college began, there were two schools for African American students a few miles north at Arch’s Grove and Union Chapel. (Editor’s note:  A school with a largely Native American student population was also founded around the close of the Civil War near the current Pleasant Grove Elementary School. Read more.)

During the 1880s in what is now the Town of Elon, African American men living near the railroad constituted a labor supply for transferring cotton and textile shipments for the mills north of the railroad. Their availability attracted mill owners to that site and providing the name for the railroad’s stop: “Mill Point.” As land for the college was cleared and its operations began, African American women and men living nearby contributed to its establishment as employees. (C. Troxler and W. Vincent, 292, 308; Carole W. Troxler Papers, Elon University Archives)

In 1869 John Trollinger bequeathed a parcel of land to his son W. H. Trollinger: 150 acres on the north side of the North Carolina Railroad adjoining parcels owned by L. Huffines, David Whitesell, and others (Alamance County Register of Deeds 2018). The Trollingers were descendants of Adam Trollinger, who brought his family from Baden, Germany, to settle near Pine Ford around 1745.

In 1889 several Alamance County mill owners and farmers near the new Mill Point freight depot donated money and land, or sold it at a bargain, for the site of a new Christian educational institution to replace Graham College. W. H. Trollinger contributed the largest parcel of land for the new college.
W. H. Trollinger’s company made the bricks for the first two buildings. The Trollinger clay pit and brickyard were located in the “southeast corner of the village south of the railway.” (G. Troxler 2014, p.12).

Troxler, George. 1984. “Alamance before the Civil War. Alamance County: The legacy of its people and places.” Greensboro: Legacy Publications.

A Timeline of Elon History