The assistant professor in cinema and televisions arts produced and script supervised the award-winning independent film “East of Middle West."

Kai Swanson, an assistant professor in the Cinema and Televisions Arts Department, has seen her most recent work, “East of Middle West,” collect eight awards and secure screenings at multiple international film festivals in recent months. After working for nearly two years in a pandemic to produce the award-winning, feature-length film, Swanson said she is still trying to find the words to sum up the impactful experience.

“I’m still uncertain what to feel or say,” Swanson said. “It’s wonderful that more people have the chance to watch the film because of these film festival screenings, and can identify with the characters and plot. I feel honored to be part of such a fantastic team for such a great, meaningful story. I’m excited to see where ‘East of Middle West’ screens next.”

The plot of “East of Middle West” follows a teenage runaway and a widowed father who each fight to take matters into their own hands to redeem their dark past. While Swanson originally was hired as a script supervisor, she also took on the role of post-production producer. The film was made in just 21 days, an ambitious feat Swanson said she is grateful to be part of. 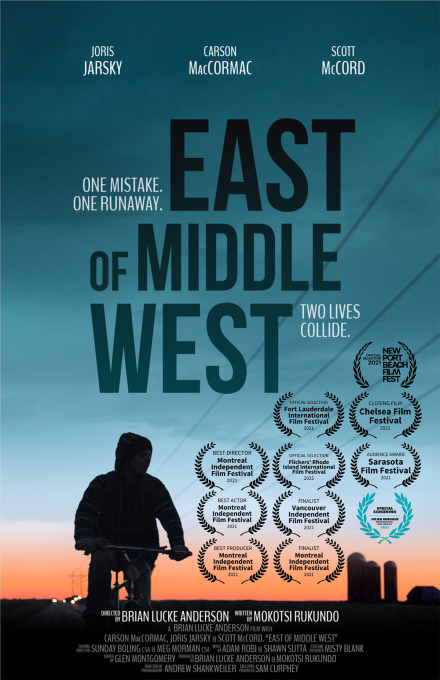 “My favorite part was working with the crew when filming in Iowa,” Swanson said. “To this day, this is one of the best crews I have ever worked with and I feel lucky to be part of such a creative, passionate environment.”

Click here to watch a trailer for “East of Middle West.”

As a script supervisor, Swanson worked on set to ensure continuity throughout principal photography. In film, continuity is making sure that all details in a project are consistent from shot to shot and from scene to scene, even when each shot may have been taken at a different time and in a completely different order. In her role as a post-production producer, Swanson worked on managing budgets and providing feedback on rough cuts, among other tasks.

Swanson, faculty adviser of Elon Student Television, said her experience on set of “East of Middle West,” as well as all of her professional experiences outside the classroom, have impacted how she teaches students at Elon.

“Many of the lessons I learned were not taught in the classroom when I made my way into the film, video and television industries. These were lessons I learned through experience on set, and often found myself wishing I had someone to guide me through certain career decisions,” Swanson said. “That is what I wish to offer to my students and mentees – to pay forward the lessons I learned firsthand, the hard way.”

“East of Middle West” was written by Mokotsi Rukundo and directed by Brian Lucke Anderson.