The survey of N.C. attorneys under the age of 45 also found that most believe being an attorney allows them to make society a better place, with more than half at least somewhat interested in seeking political office.

A recent survey by the Elon University Poll of younger attorneys in North Carolina has found that more than 80 percent believe the state’s legal system needs moderate to major changes, and that more than half say they are interested in running for political office.

The survey of N.C. attorneys under the age of 45 who were admitted to the N.C. Bar less than 11 years ago explored their views of their profession, their careers and collected data about how they are compensated for their work.

The survey found that, on the whole, these younger attorneys are pleased with their choice of career and believe they are making a positive impact on society. While a majority (61 percent) have considered leaving the legal field during their careers, a much larger portion (85 percent) say they expect to continue practicing law for the rest of their working careers. 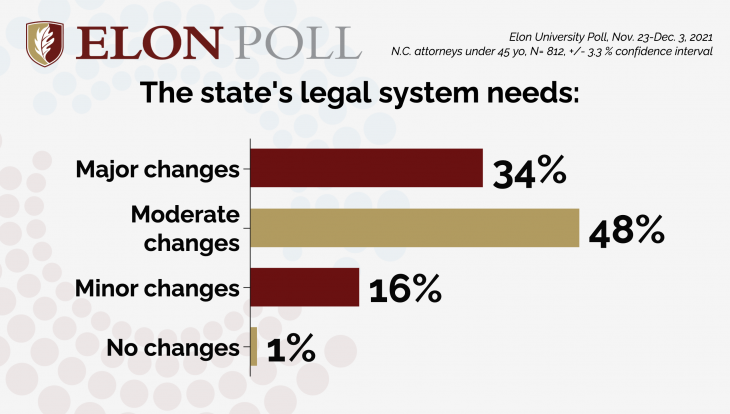 “Contrary to the stereotype of the unhappy lawyer, we found most younger attorneys in North Carolina found meaning in their careers,” said Jason Husser, director of the Elon Poll and associate professor of political science. “The vast majority of the younger attorneys we surveyed are planning to remain attorneys for the long haul, are entering the prime of their careers, and are seeing a need for some changes in the state’s legal system. Those findings combined suggest a generation of legal reforms are on the long-term horizon in North Carolina.”

The Elon Poll found an average salary of about $105,000 for these younger N.C. attorneys, with the top 10 percent making more than $187,500 and the bottom 10 percent making $55,000 or less. The poll found that 55 percent were at least somewhat satisfied with their total compensation, including benefits, while 34 percent said they were somewhat or very dissatisfied. About a quarter — 24 percent — said they were very satisfied.

The survey of 812 attorneys was conducted Nov. 23 through Dec. 3, 2021, using an email list of attorneys obtained from public records. In total, the Elon Poll sent emails to 10,792 email addresses. The survey had a margin of error (confidence interval) of +/- 3.3 percent. A fuller explanation of the survey methodology is available in the full report.

Views of the legal profession

The Elon Poll found that these younger attorneys are generally confident about their decision to pursue a career in the legal field and continue to view the profession favorably.

According to survey results, 53 percent of those surveyed said they somewhat or strongly agree with the statement that “If I could give advice to a younger version of myself, I would encourage myself to pursue a legal career.” That compares to 34 percent who say they somewhat or strongly disagree, with the remaining neither agreeing or disagreeing. 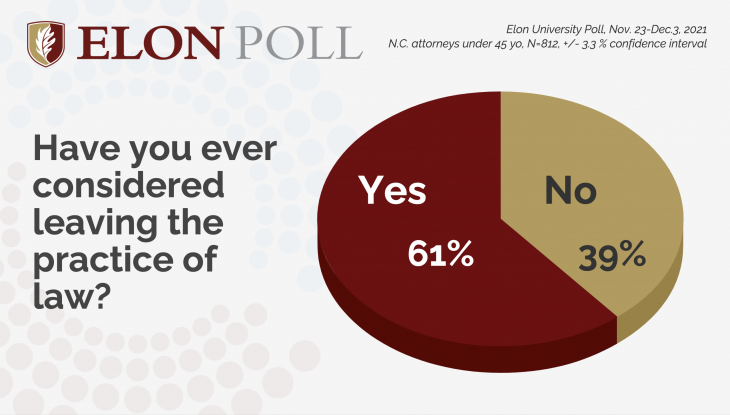 Similarly, the survey found that 81 percent agree with the statement “Being an attorney allows me to help make society a better place,” with 35 percent strongly agreeing and 46 percent agreeing somewhat. Seven percent somewhat or strongly disagree and the remaining 12 percent neither agree nor disagree.

“This was Elon University’s first survey of North Carolina attorneys in what may become a series of surveys of professions,” Husser said. “As advisers and leaders, attorneys play a critical role in what happens on the ground in North Carolina politics and business. Their attitudes on issues are often leading indicators about trends across the state as a whole.” 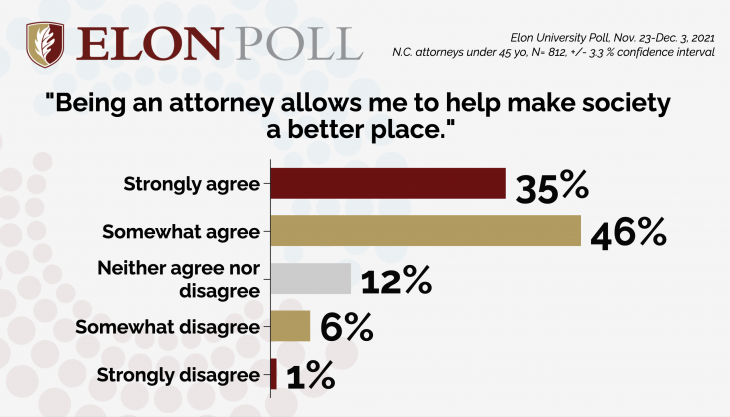 Where they are and what they make

Health insurance, continuing education support and remote work ranked as the most common benefits for N.C. attorneys while student loan payment support, low billable hour requirements and paid parental leave were the least common, the poll found. Only 10 percent of these attorneys said they received a signing bonus, with 38 percent saying they received an end-of-year bonus last year.