Hunter is competing for the highly competitive national fellowship awarded each year to those with goals of working in public service or government. Winners will be announced by April 15.

Elon University student Kiara Hunter ’23 has been named a finalist for a 2022 Truman Scholarship, a prestigious national fellowship awarded each year to college juniors who seek to work in education, government, the nonprofit or advocacy sectors, or elsewhere in public service. 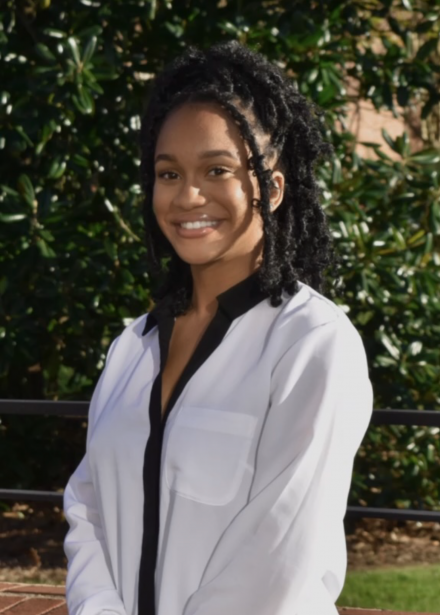 Hunter is one of just 189 students nationwide to be named a finalist, and one of only five attending a college or university in North Carolina. The Harry S. Truman Scholarship Foundation received 705 applications from 275 colleges and universities for this year’s awards.

An Odyssey Program scholar at Elon, Hunter is majoring in public health studies and statistics. Hunter was selected in 2021 to receive the Lumen Prize, the university’s premier undergraduate research award that comes with a $20,000 scholarship to support and celebrate her academic achievements and research proposals.

As a Lumen Scholar working with her mentor, Associate Professor of Public Health Studies Stephanie Baker, Hunter is using community-based participatory research methods to study the experiences and needs of Black teen fathers. As part of her research, Hunter established a community advisory board that includes professors, researchers, nonprofit leaders and adolescent fathers and facilitates the board’s meetings.

In nominating Hunter for the scholarship, Director Ann Cahill and Interim Associate Director Janet Myers from the Office of National and International Fellowships noted that “as a Lumen Scholar, Kiara is held up on campus as a model of a dedicated, insightful and self-directed undergraduate researcher.”

Baker said that Hunter embodies the characteristics of an activist and an organizer. “She has a deep internal motivation for equity and justice, she is committed to unlearning and learning to deepen understanding, she is willing to name and work through blind spots or inaccurate narratives she may hold, and she sees her work as part of a larger movement within which her specific role may shift and change, but her commitment will be long lasting,” Baker said.

Hunter’s passion for racial justice and equity has led her to be an active participant in the Health Equity and Racism Lab (H.E.R. Lab), an Elon initiative launched in 2021 by Baker and Assistant Professor of Public Health Studies Yanica Faustin. The initiative seeks to analyze the roles of race and racism in contributing to health inequities. This spring, Hunter is expanding on her academic and research interests during a semester abroad in Cape Town, South Africa.

Hunter is active in the Student Government Association, currently serving as the organization’s treasurer, and she assists her fellow students as a statistics tutor. As an involved member of Mt. Sinai Missionary Baptist Church, she worked with its congregational health committee to educate the community about COVID-19, vaccinations and healthy living practices.

If she is awarded the Truman Scholarship, Hunter plans to seek a master’s degree in public health with a concentration in population, family and reproductive health at Johns Hopkins University. Her long-term career goal is to work at the Centers for Disease Control and Prevention, first in the Public Health Associate Program and later as a public health analyst with the goal of addressing racism as a risk factor for negative family health outcomes.

The Harry S. Truman Scholarship Foundation, established by Congress in 1975 as a memorial to the 33rd president, awards scholarships for college students to attend graduate school in preparation for careers in government or elsewhere in public service. The foundation has named more than 3,000 Truman Scholars since the first awards were made in 1977. Breanna Detwiler ’09 was the first Elon University student to win a Truman Scholarship. She received the honor in 2008.

To learn more about the Truman Scholarship and other nationally competitive awards, visit the National and International Fellowships website.