It’s tempting to think of values like honesty and justice as immutable, but like anything involving human behavior, the truth is slipperier.

Our understanding of virtue changes over time, influenced by cultural, political and religious contexts. 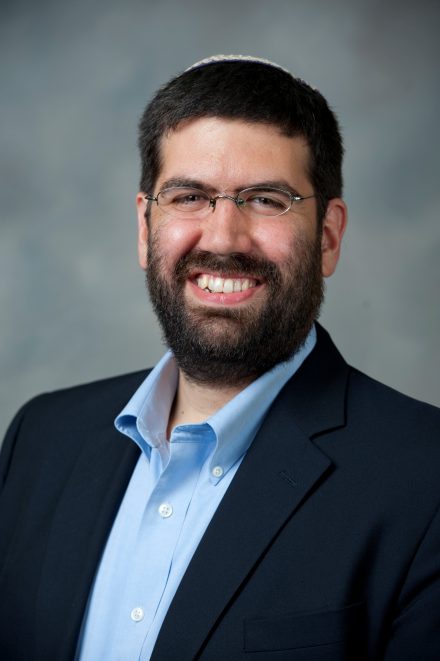 “Modern Musar: Contested Virtues in Jewish Thought,” a new book by Associate Professor of Religious Studies and Lori and Eric Sklut Scholar in Jewish Studies Geoffrey Claussen, examines the diversity of Jewish perspectives in 10 areas of virtue. By engaging the writings of 78 modern Jewish thinkers in a conversation, the book expands the understanding of Jewish moral traditions and illuminates their context.

“I wanted to press the boundaries of how we might think about and teach about Jewish ethics,” Claussen said. “The book is about diverse Jewish approaches to virtue and character — in Hebrew, musar — how Jewish thinkers have debated what it means to be a good person and how they’ve debated how those ideas relate to Jewish tradition or Jewish identity.”

“Modern Musar: Contested Virtues in Jewish Thought” was published this spring by the University of Nebraska Press and Jewish Publication Society. It includes teachings by members of the Musar movement — a pietistic movement which emerged in the 19th century and was the subject of Claussen’s first book — alongside philosophers, political figures, novelists and historians from many other Jewish traditions. The result is a conversation of sorts, led by Claussen’s analysis.

The book is organized around 10 virtues: honesty and love of truth; curiosity and inquisitiveness; humility; courage and valor; self-restraint and temperance; gratitude; forgiveness; love, kindness and compassion; solidarity and social responsibility; and justice and righteousness.

Claussen discusses teachings from Orthodox, Conservative, Reform, Reconstructionist, Renewal, Humanist and secular Jews from over the last 250 years. He stresses a need to reject the idea that there is a consensus among Jews on questions of ethics. Rather, he says, “all human groups are full of disagreement about how to live in the world,” and “it’s important to understand how those in positions of power often suppress divergent views.”

Some of the figures quoted in the book are controversial, such as Meir Kahane, who advocated violence against those regarded as enemies of the Jewish people and was convicted of participating in terrorist plots.

“The goal in writing this book was not to put forth the views I think are best, but to understand the contested history of the discourse around Jewish ethics,” Claussen said. “The thinkers discussed in the book argue that virtues are important but understand them differently. I want to help readers recognize the diversity of Jewish traditions and to see how Jewish discourse about ethics has functioned to further different kinds of agendas and shape different kinds of Jewish identities.”

In a recent virtual event marking the book’s release, hosted by Elon’s Center for the Study of Religion, Culture, and Society, Claussen was interviewed by Louis Newman, a prominent scholar of Jewish ethics and Stanford University’s dean of academic advising and associate vice provost for undergraduate education.

“‘Modern Musar’ builds on and contributes to increasing interest in musar among people in the Jewish community and well beyond that. It intentionally showcases the diversity of views on musar and indeed on Jewish ethics as a whole,” Newman said. “It will expand our perceptions of what Jewish moral traditions encompass.”

The book was shaped by Claussen’s Jewish ethics courses and the ways he engages students to think critically about ethics, religion, culture and politics.

“I want readers to see the diverse ways that human traditions can be constructed, and how they are constructed by particular people in particular moments for particular reasons,” Claussen said. “And I hope people can see how things that are often described as religion are bound up with other elements of human life.

“It’s a book that very much expresses my approach as a scholar and a teacher.”