The Program for Ethnographic Research and Community Studies (PERCS) awarded Hannah Boone '22 and Emily Wilbourne '22 for their outstanding ethnographic research in a ceremony on April 21.

In a ceremony at Johnston Hall on the evening of April 21, The Program for Ethnographic Research and Community Studies (PERCS) co-awarded Hannah Boone ’22 (mentor Leyla Savloff) and Emily Wilbourne ’22 (mentors Casey Avaunt and Pamela Winfield) the PERCS Outstanding Ethnography Award for their undergraduate research in climate change activism and traditional dance practice.

This award is usually given to a single recipient and recognizes the student who has conducted the most outstanding ethnographic research project at Elon University, judged according to the quality of both the process and product. This year, however, two projects stood out as exemplary and worthy of recognition.

Boone is an anthropology major with minors in Spanish and psychology. As an Honors student, she completed her senior thesis, titled “Fear for the Future: Youth Climate Change Activism,” an ethnography that analyzes how hope and fear combined fuel the activism of environmental youth.

Boone conducted research for her project during a global pandemic, which added a deeper analysis of her methods as she had to consider the ways Zoom interviews impacted her project. In rethinking her research methods, she chose to incorporate an art project to unpack the meaningful ways in which hope and fear are expressed nonverbally. Throughout her research process and writing progress, Boone sorted through the challenges that came her way with a positive attitude and a very pragmatic problem-solving approach.

The North Carolina native is now moving on to pursue a master’s degree at Oregon State University to further develop her research project focused on how art and emotions are part of a milieu that redefines climate change activism. 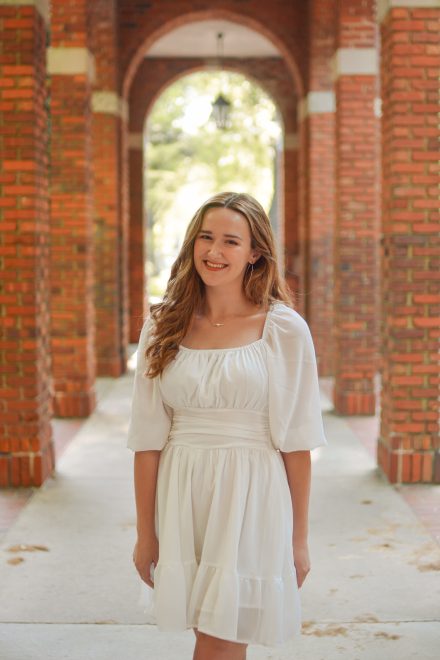 Emily Wilbourne is an arts administration major with a dance and interreligious studies double minor. She is also a member of the Multifaith Scholars program. Her project investigated the impact of Japanese imperialism on a traditional Buddhist drum dance from Korea called “seungmu” to explore embodied negotiations of national identity and religion in relation to political ideologies and historical frameworks.

Wilbourne’s research project brought her to Korea on two separate occasions, where she conducted ethnographic fieldwork in Busan. As a SURE / CSRCS Summer Fellow during June and July 2021, she interviewed renowned practitioners, teachers and masters of the dance, in addition to interviewing historians of modern Korea with the assistance of a translator. She also conducted participant observation by studying the technically demanding Monk’s Dance with a professional seungmu dancer, and she attended traditional dance performances at the National Gugak Center in Busan.

Her research has been presented at two national professional conferences, recognized on the national level by an award from the Forum for Education Abroad, and accepted for publication in the Journal of Theta Alpha Kappa, the national honors society for Religious Studies.

The scholarship established by Elon parents Dave and Suzanne Lissy P’24 through the Lissy Family Foundation will help recruit outstanding students who will become graduates the world needs. The couple’s gift is part of the Elon LEADS Campaign, which concludes Dec. 31, 2022.