Liu, assistant professor of performing arts, has performed in the Broadway cast of "The Phantom of the Opera," the "Radio City Christmas Spectacular" and the Cincinnati Ballet — just to name a few.

Over the course of the summer, the Elon University community has welcomed a number of new faculty and staff, including new Assistant Professor of Performing Arts Courtney Liu. She joins after having taught masterclasses at Elon previously as well as having an illustrious career in the entertainment industry. 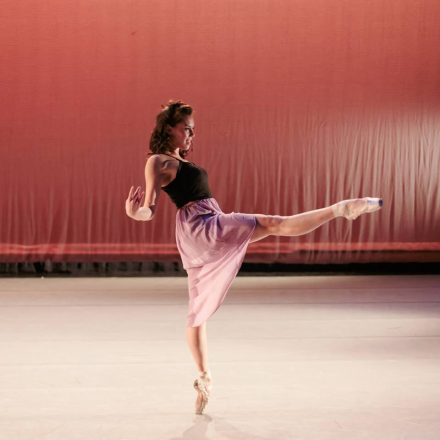 She is an educator, choreographer, performer and yoga instructor who earned her Bachelor of Arts and Master of Fine Arts Degrees from Duke University. Well-versed in the art of dance and choreography, Liu has always had a passion for roles and dances that “prioritized storytelling.” So, joining the world of music theatre felt natural in her move to New York.

“My favorite part about music theatre is that collaboration is the backbone of the art form. The book, music, choreography, lights, sets, costumes, props and more all have to work together to tell a cohesive story and build the ‘world’ of the show.”

Having loved the art of dance from the age of two, Liu has an extensive and impressive resume. She’s performed in the Broadway cast of “The Phantom of the Opera,” the “Radio City Christmas Spectacular” and the Cincinnati Ballet — just to name a few. She has also presented her educational research on ballet, body image and flow/yu at various conferences, summits and organizations.

As mentioned previously, Liu has experienced the Elon community in varying masterclasses for the students. However, she has also found herself in professional environments with Elon alumni and has worked with several Elon contacts over the past couple of years. She expressed that she was “always impressed by their well-rounded talent, diverse interests, work ethic, and entrepreneurial spirit.”

When Professor Liu is not performing or teaching, she is found alongside her part-Australian Shepherd, part-Lagotto Romagnolo dog named Barkley playing “find it” with popcorn kernels around the house.

Professor Liu will be choreographing for the Fall and Spring Dance Concerts, teaching Dance for the Musical Stage I, III, and IV, Ballet IV, Yoga, and co-directing “Collage” and “Grand Night.”

The Performing Arts Department are so thankful to have Professor Liu join the Elon family!