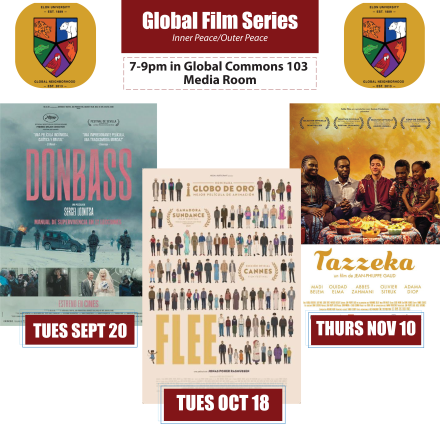 The Global Neighborhood would like to invite the Elon community to join the monthly global film nights. Starting on Tuesday, Sept. 20, the Global Film Series features movies from around the world focused on the theme of “inner peace/outer peace.”

This past Tuesday, hosted in Global Commons, students and faculty were invited to watch a streaming of “Donbass,” a film taking place in a war-torn Eastern Ukraine. Working to organize the Global Film series are Dan Burns, assistant professor of English, and Binnan Gao, lecturer of Chinese in world languages and cultures, whose efforts certainly paid off. Sandy Marshall, associate professor of geography, introduced the film and the guest speaker, Vitaliy Strohush, assistant professor of economics, who is from Ukraine.

The film takes place in a separated Ukraine. A parody of what has occurred in the region from 2014 to the present day, “Donbass” takes place in Eastern Ukraine, now named Novorossiya. As Russian propaganda and manipulation has become increasingly more prevalent, the way society has been starts to crumble. A film often described as “angry,” “Donbass” shows many different angles of a separatist, Russian-supporting region of Ukraine.

Although it seems as if the film is pieced together in different bits, it is quite the opposite. Each scene in the film highlights the ways various people and places in the region would function under a different governmental belief and alignment. There is a scene which shows off a military checkpoint where the men aboard a bus are taken for the army, and another where a governmental meeting is occurring and not going so well. The scenes come together well, even coming full circle in the end with the same scene as the beginning but a little different. Novorossiya in this film is shown as a dark place in every scene; a place where they beat people senseless on the streets, using fascism and Nazis to justify their actions.

In a Q&A session with Strohush, it was discussed how the Russians use Nazis to justify their attacks, as World War II was a battle they had won, and it was the battle against the Nazis. A common enemy, the film shows how that is used to unite Russians, and the threat of fascism can push them to believe it, to the point of fighting “rebels” to keep Novorossiya alive.

Despite being released in 2018, Sergei Loznitsa’s “Donbass” reflects the current war in Ukraine. Eastern Ukraine is currently under invasion of the Russian army. Laced with propaganda and manipulation, the events of “Donbass” can be applied to the invasion. Attempting to take the Donbass region in the war, Russia very well may be trying to create its own Novorossiya. The similarities in the justifications for the attacks in both the film and in the war are similar. Putin has been justifying his invasion of Ukraine by claiming to be “de-Nazifying” Ukraine, a similar reasoning for what soldiers in “Donbass” give for their reasoning in attacking. Additionally, this de-Nazification of Ukraine, as Putin says, is like what the Soviet Union did during World War II.

Following the conclusion of the film, a Q&A session was held with Strohush. One of the things discussed in the Q&A is what Russia does to justify its attacks. The defeat of Nazi Germany in World War II is one thing that Russians are proud of. This defeat also involved the defeat of the Nazis, which is how Russia gets away with many invasions. In the discussion, we were told they used the same excuse when invading many other Eastern European nations such as Georgia, Moldova, and now Ukraine, claiming to be defeating Nazis.

Strohush also gave a firsthand account about what it is like in Ukraine, since he and his wife have family that live in the country. He spoke about the bomb sirens going off quite often, people rushing off to the bomb shelters out of safety. He also gave insight into the film from his point of view, telling the crowd about the feelings behind the film and perspective of the director and production team in a more in-depth way.

“Donbass” features violence, a factor which intensifies its realistic approach. There are many times where it feels like you are watching a documentary and the movie does an excellent job of using emotions, anger, sadness or others, to play into the visual experience.

The next film that the Global Neighborhood will be showing in the Global Film Series is the 2018 released film, “Flee,” directed by Jonas Poher Rasmussen. An animated film telling the true story of Amin, an Afghan migrant who is living in Denmark coming to terms with his past to embrace his future. The film will also have a discussion following it which will add a lot to the movies and are essential to tying them up. If interested, the movie will be aired in Global Commons 103 media room on Tuesday Oct. 18 at 7 p.m. Come out and join for a film!