Xuan Huynh '24 intensely advocates for inclusion and equity by valuing differences among people leading to a more generous world. 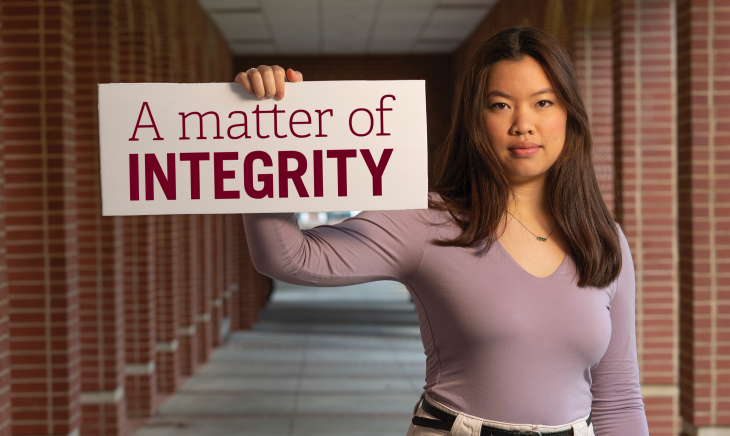 For Xuan Huynh ’24, being passionate about creating social good and systemic change is a matter of integrity. The daughter of Vietnamese immigrants, Xuan grew up in Fairfax, Virginia, immersed in Vietnamese culture. “It’s something I am super grateful for because it exposed me to that aspect of my identity,” she says. “It was also what led to my first experience with discrimination based on perceived non-citizenship status and language barriers.”

As a result, Xuan focused on volunteering. By the seventh grade, she served as a tennis coach. By the ninth grade, she organized tennis clinics that provided rackets and school supplies to middle school students. In 2019, while in the 11th grade, she organized the Open Peacebuilding and Leadership Conference. The student-run conference brought together 50 students from 14 high schools in northern Virginia to foster teamwork, communication and leadership skills, and critical and creative thinking.

“My upbringing developed my emotional intelligence, compassion and a capacity to give back to my community,” she says. “It elevated my desire to create social good.”

After arriving at Elon as a Business Fellow, Xuan began seeking ways to serve historically and presently marginalized students. She joined the Center for Race, Ethnicity and Diversity Education as a student coordinator. She’s also a member of the Asian, Pacific Islander, Middle Eastern and North African Task Force, which aims to identify strategies and organize support for those communities at Elon.

As a double major in finance and data analytics with a minor in women’s, gender and sexualities studies, Xuan hopes to pursue a career as a financial adviser and “help women establish financial independence.” In the meantime, she’s using her time at Elon to create social good and a more inclusive campus for all students while enhancing her skills to make the world more equitable.

Xuan doesn’t focus on her impact being large or small, or a conduit for fame and money. She is humbled by her heritage and a deep appreciation for people’s differences. “Success has never been about wealth for me; I would like to influence people to assist with generosity,” she says. “For me, it’s simply a matter of integrity.”

Xuan is part of “Huemanity of People,” a series by the Division of Inclusive Excellence that celebrates the diversity of Elon’s community to uplift the
values of inclusion and equity.