The Elon Black Alumni Network came together during Homecoming & Reunion Weekend to celebrate its 25th anniversary and to recognize five outstanding members of the Black community for their contributions to their professions, their local communities and Elon.

“Since 2010, we have honored over 40 alumni, faculty and staff with the EBAN awards for the extraordinary things they are doing in their local communities and for their dedication to the Elon Black Alumni Network,” said Akilah Weaver ’00, EBAN’s president during a special brunch on Nov. 6. “Today, we will add five more deserving individuals to this esteemed group.”

Weaver also recognized the donors who endowed the Black Alumni Scholarship, which was created 14 years ago and has so far funded the education of 10 talented Black students. During the past year, she said, 651 alumni supported the scholarship raising more than $92, 570. “We have a very ambitious, but achievable goal of tripling the Elon Black Alumni Scholarship, bringing the endowment total to over $1 million,” Weaver said. “Doing this would allow for us to fully fund a four-year scholarship to a deserving black student at Elon University.”

About the EBAN award winners

Presented to a current Elon faculty or staff member who has made significant contributions to the Elon Black student experience through mentorship, support and interaction with students. 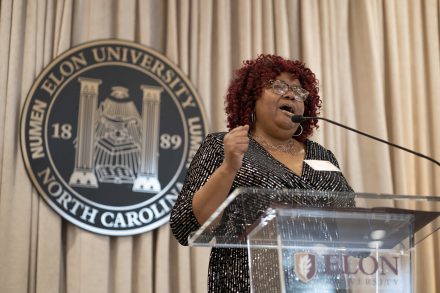 In October 2010, Marilyn Slade began working as the program assistant for Elon University’s Multicultural Center, now known as the Center for Race, Ethnicity, & Diversity Education (CREDE), under the direction of Leon Williams. On Elon’s campus, she is known as “Ms. Marilyn” and a mother/auntie to some of the students. One student created a playlist in her honor called “The Auntie/Ms. Marilyn.” She even had the honor of playing the mother of Donovan Rainey ’14 in a mock wedding sponsored by the Truitt Center for Religious and Spiritual Life. Marilyn also serves as the adviser for the National Council of Negro Women Inc., a member of the Advisory Board for Black Student Spiritual Support and the liaison for the Neighborhood Clean-Up Committee, among roles in other organizations. She has also served on the MLK Day Celebration and the Phillips-Perry Black Excellence Awards Banquet committees.

Marilyn’s commitment to student success and service at Elon has been recognized by many members of the Elon community. In 2013 she received a Certification of Appreciation for her dedicated service, her commitment to serving others and for exemplifying the ideals of womanhood to the campus of Elon University and Alamance County from the Sigma Delta Chapter of Alpha Phi Alpha Fraternity, Inc. In 2018 Marilyn was recognized as an outstanding student mentor at The Black Senior Soiree event sponsored by Elon’s Black Student Union. Additionally, she received the Janice Ratliff award for her outstanding contribution to the Black student community at the Phillips-Perry Black Excellence Awards Banquet. In 2019 she was recognized as one of Alamance County’s Phenomenal Women of Black Excellence from the African American Cultural Arts & History Center Organization. And at Elon’s 2021 Staff Appreciation Day, she received the Blanche Garrison Memorial Award for the role she plays in mentoring students during their time at Elon and beyond.

Marilyn’s commitment to students and Elon University is a product of her belief. Above all else, Marilyn is a devout Christian who strives to please God. Her favorite Bible verse is Colossians 3:23: “Work willingly at whatever you do, as though you were working for the Lord rather than for people.”

Presented to an alumna who has graduated from Elon within the past 10 years and has distinguished herself in a profession, her local community and brought honor to the Elon community as a whole. The person also is active in the Elon Black Alumni Network through their support of EBAN events, initiatives and the EBAN scholarship. 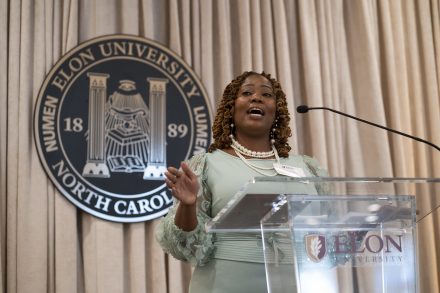 Brittany Carroll ’11 graduated from Elon University in 2011 with a B.A. in political science and international studies with a focus on East Asian affairs. She also has a M.A. from American University in international affairs with a focus on African affairs. Brittany currently works as the assistant general services officer in Baghdad, Iraq, on a one-year assignment. Previously she served as vice consul in the U.S. Consulate in Guangzhou, China, from 2018 to 2021. She played an integral role with the American Citizen Services unit at the onset of the COVID-19 pandemic and helped with the evacuation of American citizens from Wuhan.

During her first tour in Georgetown, Guyana, she served as the sole general services officer, playing an outsized role in activating the Marine Security Detachment, which had been inactive for more than 20 years. She is a mid-level management-coned officer who entered the Foreign Service in 2015. Prior to officially starting with the department, she participated in internships with the agency in Shanghai, China; Banjul, The Gambia; and the Office of West African Affairs located in Washington, D.C.

Brittany is a former White House intern, serving in the Office of Presidential Correspondence under the Obama administration. She is the recipient of two national fellowships. She received a Fulbright English Teaching Assistantship in Kaohsiung, Taiwan, a program that places Fulbrights in classrooms abroad to aid local English teachers and serve as cultural ambassadors for the U.S. She also received the Thomas R. Pickering Fellowship, a program funded by the U.S. Department of State that recruits and prepares individuals for Foreign Service careers. In the fall of next year, she will head back to Washington, D.C., to be reunited with her family and serve at the Department of State’s headquarters in the African Affairs Bureau.

Presented to an alumnus who has graduated from Elon within the past 10 years and has distinguished himself in a profession, his local community and brought honor to the Elon community as a whole. This person is also active in the Elon Black Alumni Network through their support of EBAN events, initiatives and the EBAN scholarship. 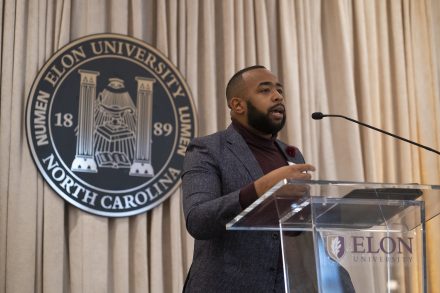 Kris Jiles ’15 is a 2015 graduate of Elon University, where he majored in political science and minored inphilosophy. During his time at Elon, Kris served as an Isabella Cannon Leadership Fellow, a senator for the Student Government Association and the president of the Sigma Delta Chapter of Alpha Phi Alpha Fraternity, Inc. Following his undergraduate experience at Elon, Kris went on to receive his Juris Doctor at Howard University School of Law, where he served as a senior notes and comments editor for Howard’s Law Review and was a Dean’s Fellow recipient. Following law school, Kris worked at a prominent New York law firm as an associate in the Corporate Department. Kris now works as a mergers and acquisitions attorney at Cooley LLP in Washington, D.C.

Presented to an alumna who has graduated from Elon more than 10 years ago and has distinguished herself in a profession, her local community, and brought honor to the Elon community as a whole and the Elon Black Alumni Network through their support of EBAN events, initiatives and the EBAN scholarship. 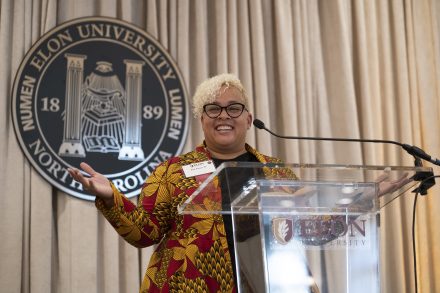 Kelli Palmer ’98 is a strategist and practitioner in the field of diversity, equity and inclusion. She is currently the head of Global Inclusion & Diversity at CFA Institute, as well as the founder and principal of IDEA Minds, a consulting firm that partners with organizations across sectors to advance inclusion, diversity, equity and accountability. Her background working across business, nonprofit and education landscapes has made her a multidimensional leader and strategist who brings together deep expertise with pragmatic, business-minded approaches to proliferating belonging. She has also had the privilege of leading CFA Institute’s development of a robust, multi-year corporate social responsibility strategy, establishing the organization’s sustainability strategy and ensuring that environmental, social and governance considerations are included in the organization’s day-to-day operations.

Kelli was raised in Montgomery County, Maryland, and attended Elon University, where she earned a bachelor’s degree in elementary education. A devoted alumna, she is a member of the Black Life Advisory Committee and the President’s Council. She received her master’s degree in counselor education from Wake Forest University and a Ph.D. in higher education administration from the University of Virginia. A lifelong learner, she studied at Oxford University and has earned graduate certificates from Boston College and Harvard University.

Kelli is a proud, long-term resident of Charlottesville, Virginia, where she resides with her husband and their children. She is an active contributor on numerous local and state nonprofit boards, including the Community Climate Collaborative (C3), Peabody School and the Piedmont Virginia Community College Foundation. She has previously served as a member of the boards of the United Way of Greater Charlottesville, Charlottesville Area Community Foundation, Live Arts and the Center for Nonprofit Excellence, among many others. In addition to her professional accomplishments, she is a classically trained vocalist and former member of the Washington Opera Company.

Presented to an alumnus who has graduated from Elon more than 10 years ago and has distinguished himself in a profession, his local community and brought honor to the Elon community as a whole and the Elon Black Alumni Network through their support of EBAN events, initiatives and the EBAN scholarship.

Steve Walker ’93, a deputy comptroller and director of financial operations within the Department of the Navy, oversees the staffing, management and execution of multi-billion-dollar Navy programs. His financial management background within the civil service ranks has spanned more than 20 years and includes the receipt of the prestigious Golden Eagle Award for “exceptional performance of duties in support of our national tragedy on 9/11.”

In addition to his primary financial duties, Steve also serves as his agency’s special emphasis program manager for its African American Employment Program. In this role, he serves as the primary resource for advice, guidance and policy with respect to all conditions of employment, recruitment and community outreach factors that influence the employment of African Americans. He has used this resource and influence to assist in his ability to recruit and employ African American candidates, including several Elon University graduates.

During Steve’s time at Elon, he was a four-year letterman on the basketball team while also being enrolled in the Elon Honors Program. He was a proud charter member of Elon’s Sigma Delta Chapter of Alpha Phi Alpha Fraternity, Inc., in 1991. Upon graduation, Steve immediately began to serve his alma mater. He was an active participant in the development and launch of what is known today as the Elon Black Alumni Network (EBAN), where he served multiple terms as president. He also participated in the group that formed and eventually launched the EBAN scholarship. Currently, Steve is a member of the Elon Phoenix Club as well as an active member of the Elon Alumni Board and consistently promotes Elon University on a regular basis. Steve has a 15-year-old daughter, Logan, who he hopes follows his footsteps to Elon.

Each performance will take place in McCrary Theatre in the Center for the Arts.

During the Winter Term course led by Rich Landesberg from the School of Communications, students visited concentration and death camps across Europe.

Assistant Provost Amy Overman and Professor Steve Friedland discussed bias, the brain, and how neuroscience impacts the courts on Excited Utterance, a legal podcast that "aims to provide a weekly virtual workshop in the world of evidence throughout the academic year."

Hlavaty, a senior lecturer in English, focused on post-pandemic teaching and using hammocks to address mental health in the piece for the blog of the popular hammock-maker.