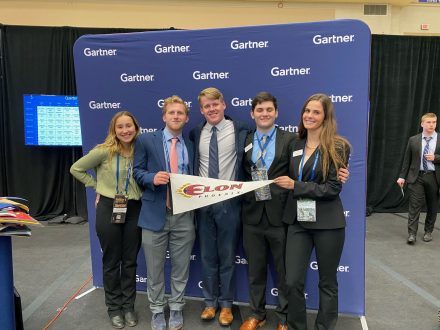 Out of 74 teams, the Elon Sales Team placed 26th overall.

Marketing major Flint was named Speed Selling Champion for Guardian. During the speed selling event, she delivered 90-second elevator pitches to five companies. “The elevator pitch consists of a clever introduction of yourself and then at the end you talk about how you would put the company at an advantage if you were to work for them,” Flint explained.

In the Roleplay event, St. Pierre, a marketing major, finished as a quarterfinalist.

NCSC is the longest-running university sales role-play competition and aims to enhance the practice and professionalism of one’s sales career. In addition to the competitive events, students participated in a career fair with more than 40 companies.

“Overall, the experience with this event was absolutely eye opening and incredible,” Flint said. “Being able to network and talk to employers, other coaches and other college students is something that will greatly prepare me for my career after Elon.”