Team looks to build on this year's successes at invitationals, the regional mock trial tournament and national Opening Round Championship Series.

As the world emerged from virtual-only events, the Elon Mock Trial Team hit the road, racked up awards and earned a placement at the in-person Opening Round Championship Series (ORCS) in Atlanta.

The Georgia Tech-hosted tournament was the first time in four years Elon’s mock trial team advanced from its regional tournament to ORCS, the American Mock Trial Association’s equivalent of the national quarter-finals. Around 640 teams compete in regional competitions and only the top 150 advance to ORCS.

At the opening round championship, Elon’s Team A competed against 23 teams from 16 southeastern universities. Blake Healey ’24 was recognized with an Outstanding Attorney Award, one of 12 recipients at the tournament. 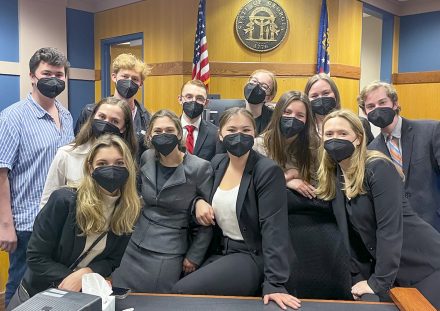 The recognitions position Elon’s team for opportunities to practice with and compete against stronger teams in the 2022-23 mock trial season.

“This establishes a concrete goal for us next year: to make it to ORCS,” said Soethout ’23, a member of the mock trial executive committee. “This year, my goal was to go to regionals and do well. ORCS positions us to participate in more invitationals and compete against stronger teams.”

Mock trial works like this: Each year, the AMTA issues a case packet that includes pleadings, witness statements, exhibits, rules of evidence, statutes and case law. The AMTA uses federal court procedure and rules of evidence, and the cases alternate between criminal and civil each year. Students prepare for roles as witnesses and attorneys by memorizing the facts of the case, preparing direct and cross-examinations, and opening and closing statements. Members playing witnesses often act out their characters. Some team members participate as attorneys and witnesses, depending on the tournament.

Campus teams host invitationals in the fall and winter leading up to regional tournaments in late winter. In the past, Elon has hosted invitationals over fall break.

Elon’s mock trial program consists of two teams with a maximum of 10 members, though more than 20 students participated in practices and preparations.

“I refer to mock trial as a ‘varsity academic sport,’ but that is really the only way I can describe it,” said Adjunct Assistant Professor of Law Kristen DelForge, who coaches Elon’s teams. “We practice at least two to three times a week regularly, including weekends when we are preparing for a competition. We also work outside of our allotted practice time to hone statements, direct and cross-examinations, objections and other technical aspects of mock trial.

“We also have a good bit of fun too, in practices and also at team dinners and mock trial traditions, such as the end-of-year murder mystery dinner and ‘mocksgiving.’ Mock trial is not just being part of a team, it’s a family. I couldn’t be prouder of our students and growing number of mock alums,” DelForge added.

Mock trial is often a proving ground for students with sights set on law school. The skills it builds through real-world experience — public speaking, understanding of case law and courtroom procedure, and on-the-fly problem-solving and critical thinking — are requirements of legal professions. 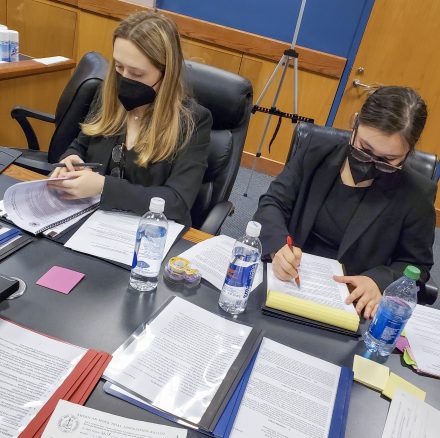 “You get to experience making objections and preparing to argue those objections based on the rules of evidence,” Takei said. “You examine the penal code and learn the process of litigation and how to tell a story at trial.”

Takei began participating in mock trial as a first-year. She was already interested in law and participated in the Legal Professions advising program. Her Elon 101 teaching assistant was on the team and encouraged her to join. Takei plans to pursue a career in criminal law.

Aspirations of law school aren’t required for participation. About half of this year’s team weren’t planning legal careers and came from diverse majors, from STEM to the performing arts.

“I would encourage anyone who’s interested to check it out,” Healey said. “You develop so many transferrable skills in public speaking, writing, preparing arguments and questioning. Then also, it’s a lot of fun and there’s a real sense of team cohesion. It’s a lot of work, but fun comes after that work.”