While teaching at Elon’s Center in London this past semester, Allocco presented her research at universities in four countries

Associate Professor of Religious Studies Amy Allocco presented research on projects she is conducting in South India at conferences and universities in four countries during the Spring 2022 semester.

While serving as faculty in residence at Elon’s London center, Allocco was eager to connect with colleagues working in cognate fields at universities in the region and accepted invitations through the spring to lecture in Lithuania, the Czech Republic, Austria and the United Kingdom.

An invitation to lecture at SOAS University of London in February provided the first opportunity to share her research. Allocco’s hourlong talk, titled “Enlivening the Goddess and Feeding the Dead,” drew an audience of faculty and graduate students associated with the Centre of Yoga Studies, which sponsored the lecture, as well as other scholars who joined virtually. The lecture focused on the spectacular festival of Mayana Kollai (Looting of the Graveyard/Cremation Ground), hosted by a popular Hindu Goddess temple in Chennai, South India. It drew on the ethnographic fieldwork that Allocco conducted on the festival in 2019, 2016 and 2007, and foregrounded the ritual process, myth, decoration and creativity in this unique context. Sabbi Lall, a recent graduate of the graduate program in Traditions of Yoga and Meditation at SOAS, wrote an online essay about the lecture and Allocco’s feminist anthropological practices. Material from Allocco’s talk features in a chapter titled “Wonder in the Cremation Ground: The Affective and Transformative Dimensions of an Urban Tamil Hindu Festival” which is forthcoming in an edited volume to be published by State University of New York Press in 2023.

Following an exchange in the question-and-answer period after her SOAS talk, Lubomír Ondračka of Charles University in Prague, Czech Republic invited Allocco to present at his university. Her April lecture, “Hindu Death Practices and Ancestor Worship in Tamil South India,” was hosted by Charles University’s Institute of Asian Studies and Department of Philosophy and Religious Studies. In it she offered an overview of the diverse Hindu death rituals and customs characteristic of different communities in Tamil‐speaking South India, focusing especially on invitation rituals designed to bring deceased relatives back into the world to take up residence as permanent deities in their family’s home shrines. This lecture invitation offered Allocco the opportunity to exchange with Ondračka and other South Asia studies faculty about her current book project, “Living with the Dead in Hindu South India.” In addition, she also engaged with graduate students studying Tamil language at the university in a separate mentoring session.

Later in April, Allocco visited Vytautas Magnus University in Kaunas, Lithuania at the invitation of Milda Ališauskienė, professor in the Department of Sociology and the Department of Political Science. Since 2020, Allocco and Ališauskienė have served as co-coordinators of the International Association for the History of Religions (IAHR) Women Scholars Network but had not been able to meet in person due to the pandemic. Allocco was invited to offer the opening plenary address for Vytautas Magnus University’s Annual National Conference of Young Sociologists and Anthropologists as well as to present a lecture in a Global Politics graduate seminar.

Titled, “Anthropology, Human Rights, and Politics: Why and How Do We Research and Study?,” Allocco’s conference plenary took up issues related to the goal of engaged and feminist anthropology, the relationships between citizen and scholar, and the role of public scholarship. Discussion following her talk centered on the concrete ways that contemporary political contexts challenge and shape scholarly commitments, methodologies, and scholarship itself, particularly considering the Russian attack on Ukraine. 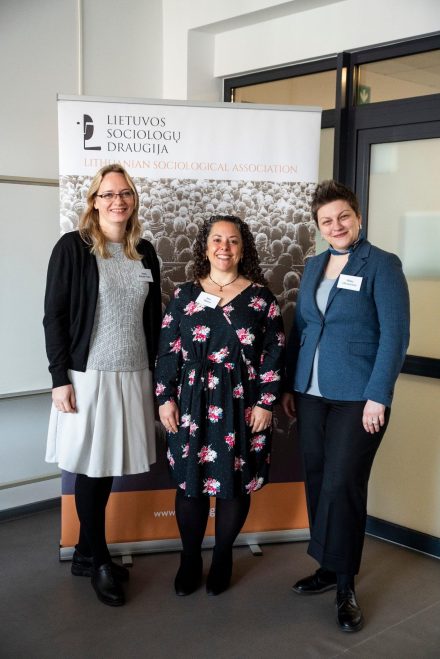 During her visit to Vytautas Magnus University, Allocco also presented “Precarity and Gendered Politics in Urban South India” in a graduate seminar on Global Politics in the Department of Political Science. Students in that seminar read an article that Allocco recently published in “The Journal of Hindu Studies,” titled “Vernacular Practice, Gendered Tensions, and Interpretive Ambivalence in Hindu Death, Deification, and Domestication Narratives.” The discussion centered on shifting gender roles and expectations in India’s current social and political contexts.

Allocco’s final invited lecture of the semester was sponsored by the Department of South Asian, Tibetan, and Buddhist Studies at the University of Vienna in Austria. Her talk, “Drumming and Dialogue: Summoning the Dead in Hindu South India,” focused on the class of priest-musicians who act as ritual specialists in non-brahminic, vernacular Tamil Hinduism and preside over the ceremonies to persuade dead relatives to dance and speak through their living kin and to return home to reside as permanent household deities that she has been researching. More specifically, her presentation analyzed the range of ritual elements—including verbal and material ornamentation, communication via flames, and the summoning of the dead from water sources—that these drummers oversee. It also highlighted the dialogues with the dead and a range of deities that are the centerpiece of these complex, multi-day ceremonies. Allocco argued for an expanded accounting of modes of Hindu engagement with the divine beyond what is currently described in the scholarly literature on Hindu rituals and Hindu death practices.

As faculty in residence at Elon’s London center this semester, Amy Allocco taught a CORE capstone called “Curried Cultures: Food and Religion in London.” Taking London as its classroom and focusing on South Asian communities, she invited the students in her interdisciplinary capstone to consider the relationships between food, imperialism, and religion. Together they sought to understand how histories of colonization, migration, multiculturalism and racism have shaped food practices in this context. Students’ readings and research were augmented by course visits to Hindu temples and Sikh “gurudwaras,” food walks and market visits, guest lectures, tastings, and collaborative cooking classes to learn about the lived experiences of London’s South Asian communities and the history of culinary interactions between Britain and the Indian subcontinent. Students undertook research projects with an ethnographic dimension that offered them the opportunity to learn directly from chefs and others in the restaurant industry as well as from members of the city’s Hindu, Jain, Sikh, Christian and Muslim communities.