A recent article in Campus Safety Magazine examining how social media can both used by individuals to brag about committing crimes and can be a valuable investigative tool for law enforcement featured the undergraduate research of Alessandra Brainard ’18. 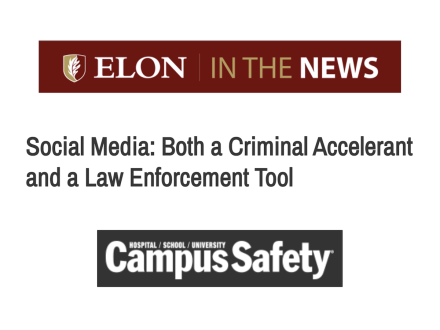 The article titled “Social Media: Both a Criminal Accelerant and a Law Enforcement Tool” includes Brainard’s examination of the role of social media in the commission of a sexual assault of an intoxicated underage girl in Steubenville, Ohio, with the crime featured on social media posts that were later used in court against the alleged perpetrators.

The article draws from Brainard’s research that appeared in the Spring 2018 Elon Journal of Undergraduate Research in Communications titled “A Content Analysis of Crimes Posted on Social Media Platforms.” Campus Safety included the following analysis of the case by Brainard:

The evidence presented in court consisted of hundreds of text messages and cellphone pictures taken by more than a dozen people at the parties. [They were traded] afterward with other students and posted to Twitter, Facebook, and YouTube.

The perpetrators utilized social media outlets to communicate with their viewers … promoting the fact that they were proud of their actions and possessed no guilt when conducting the crime.