The Broadcast Education Association released its first-ever school rankings based on student achievements in its Festival of Media Arts, an international digital media and broadcast competition, and Elon University’s School of Communications placed sixth overall. The rankings were compiled using the past five years of festival winners. 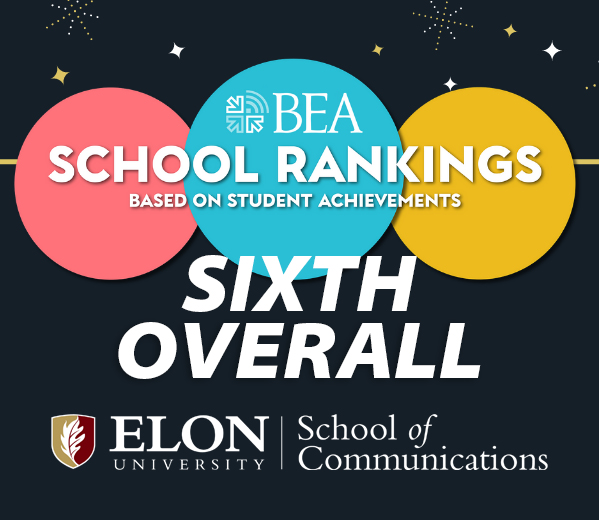 In addition to its top 10 overall ranking, Elon is recognized in five of seven competition categories. In the individual categories, Elon placed second in Interactive Multimedia and Emerging Media, third in Student Film and Video, 12th in News, 15th in Sports, and 21st in Documentary.

According to BEA, more than 5,000 student creative works were submitted from the organization’s 300-plus member institutions in the past five years. Just 99 institutions are included in the final overall rankings.

“This ranking is a testament to the incredible work produced by our students and supported by our faculty and staff members,” said Rochelle Ford, dean of the School of Communications. “While we are proud of each individual BEA award, I’m especially elated with this ranking because it highlights the consistent level of high-quality work produced in our school. Year after year, Elon students create content on par with the best academic institutions in the country.”

According to the BEA news release, the rankings are not an overall evaluation of an academic program, but an evaluation of the quality and consistency of students’ creative works produced at one institution compared to those at other institutions.

The Broadcast Education Association is the premiere international academic media organization, driving insights, excellence in media production, and career advancement for educators, students and professionals. The Festival of Media Arts was created and is organized by BEA faculty to honor the amazing works of both students and faculty. More than $19,000 in prizes is awarded each year, thanks to the generous longtime sponsorship of the Charles & Lucille King Family Foundation and the continued Diana King Memorial Endowment.

In 2022, School of Communications students collected a total of nine awards in the Festival of Media Arts, with the school claiming its first-ever first-place finish in the Narrative Category.