The Convergence of Music, Technology, and Liberal Arts

The Bachelor of Science in Music Production & Recording Arts degree is designed for students who wish to study the intersection of music and technology in the context of the liberal arts. This includes disciplines such as songwriting, composing music for film and video games, audio engineering and music production, post-production audio, music business and entrepreneurship, and performing in commercial music genres. Elon’s MPRA program prepares students for a wide variety of careers in the music industry, graduate studies in music technology, or related fields.

The guiding philosophy of the Music Production & Recording Arts degree program is to bring together the rich historical, aesthetic, and theoretical foundations of music with the stylistic and technological implications of modern music production and recording techniques, preparing talented students to be competitive in the market place of the 21st Century.

To give you an idea of the variety and quality of the work our MPRA students and graduates create, here is a playlist of some of the songs written, produced, performed, or engineered by alumni or current students in our program. 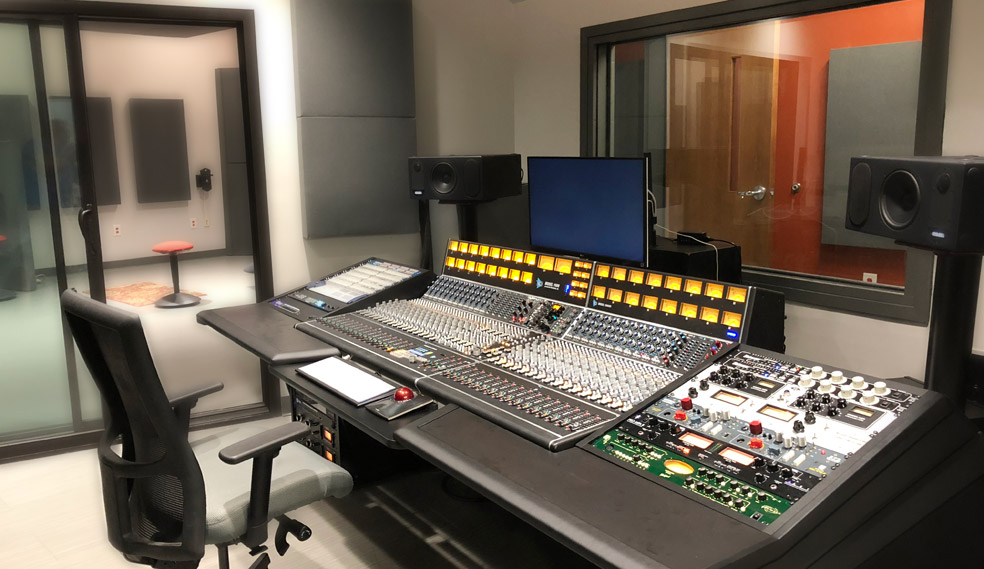 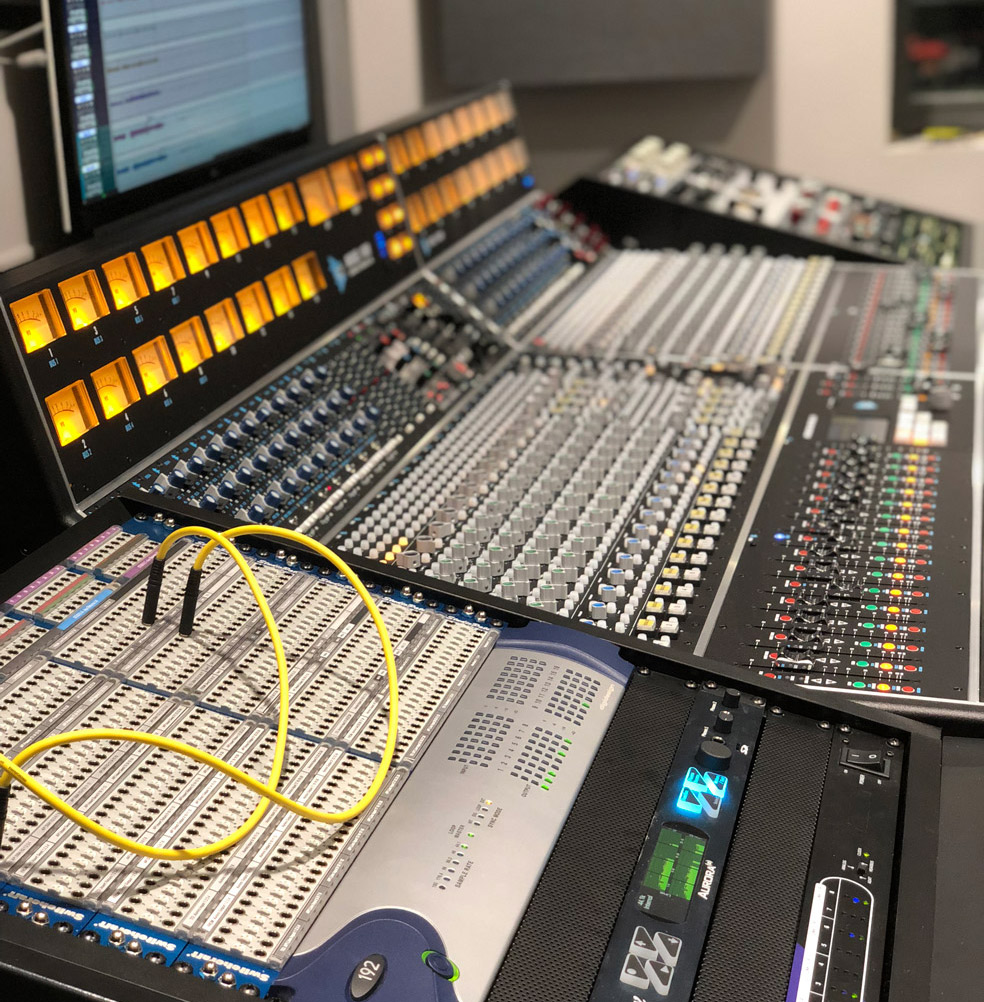 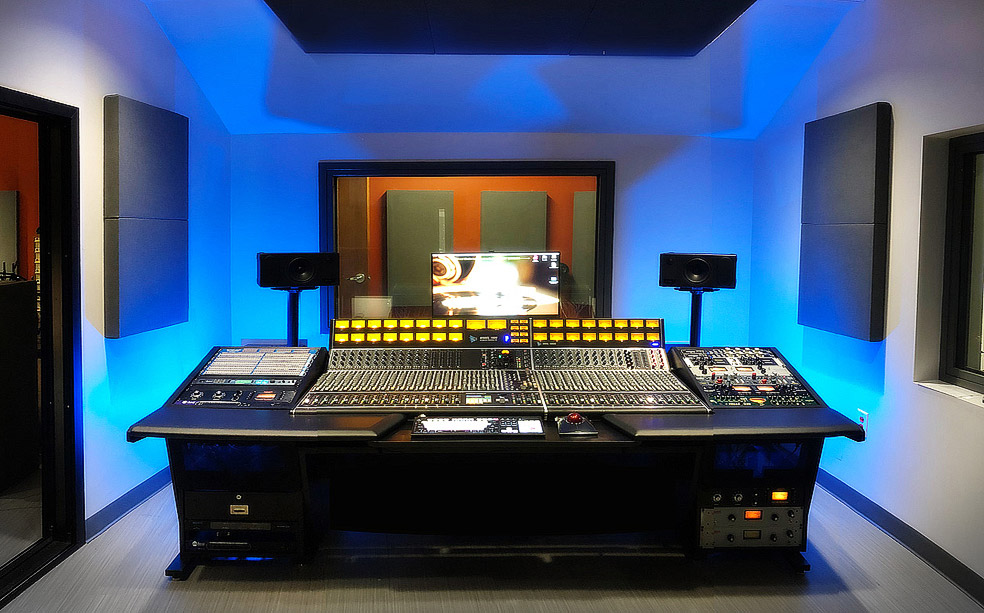 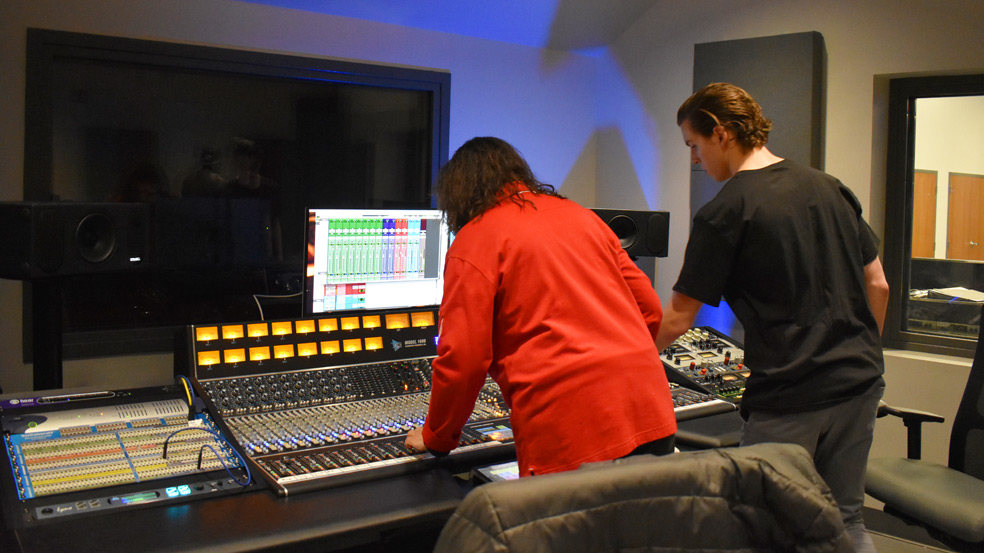 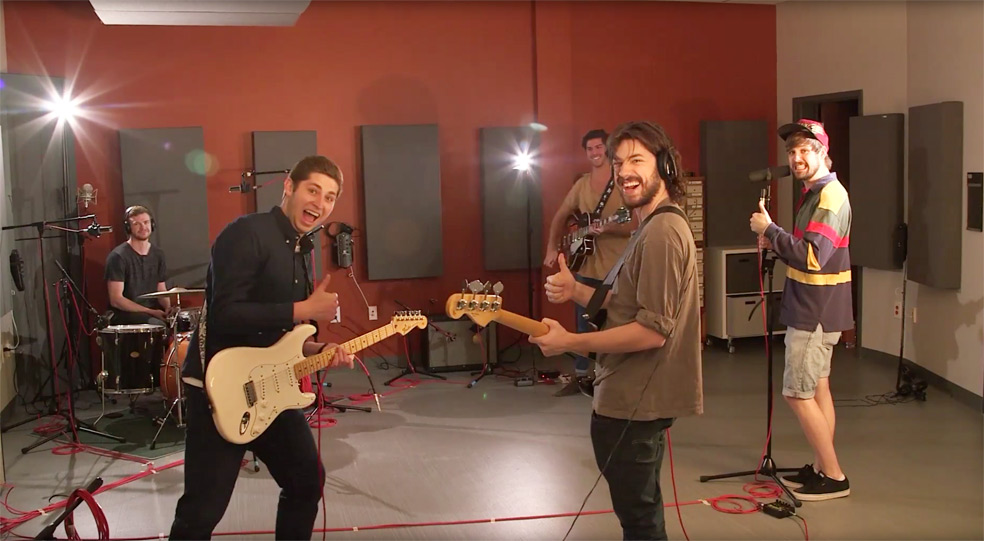 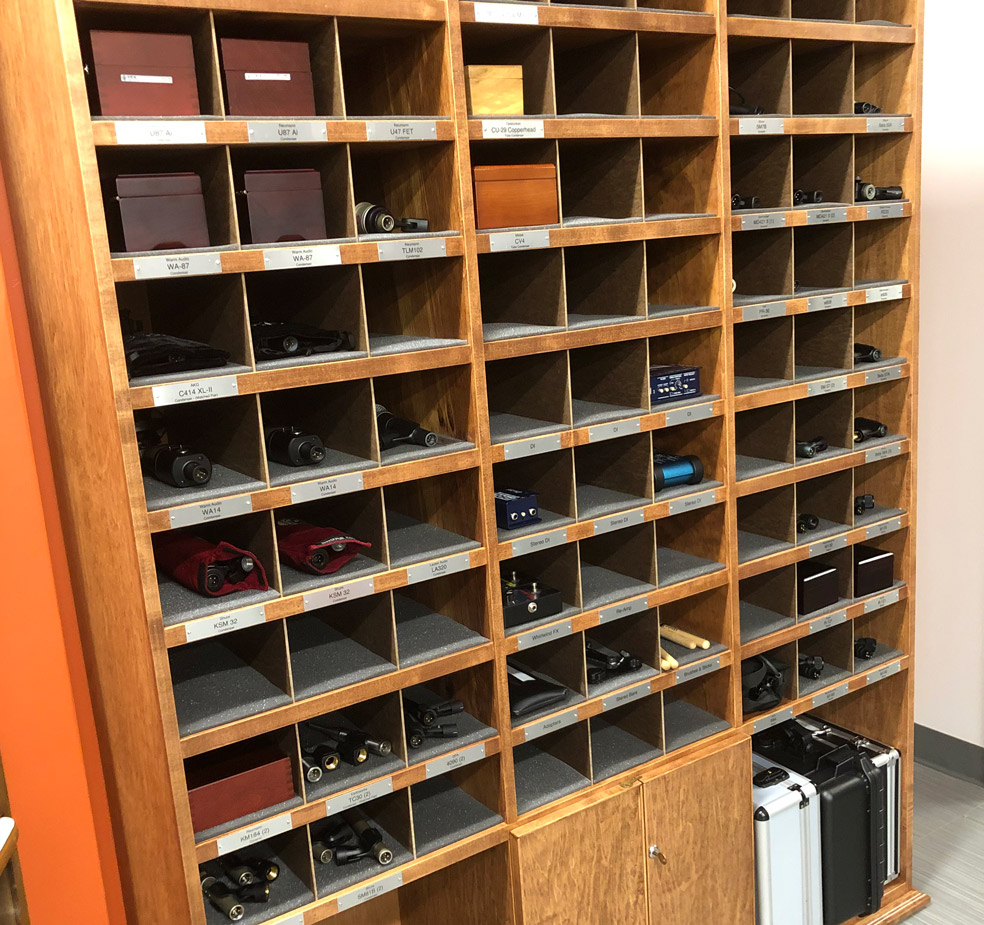 For more detailed information about our outboard compressors, EQs, and preamps, view the equipment list below:

For further details about our microphone collection view the mic locker inventory below:

Studio B features a Solid State Logic (SSL) Matrix 2 32-channel analog mixing console with dual-layer automation (analog and DAW control), with PMC Result6 nearfield monitors. Our primary DAWs are Avid Pro Tools HD Native and Logic Pro X. Studio B is used as a teaching and learning space for microphone technique, signal flow and gain structure and a place for students to practice the fundamentals of music production and audio engineering before moving to Studio A for higher level recording projects. 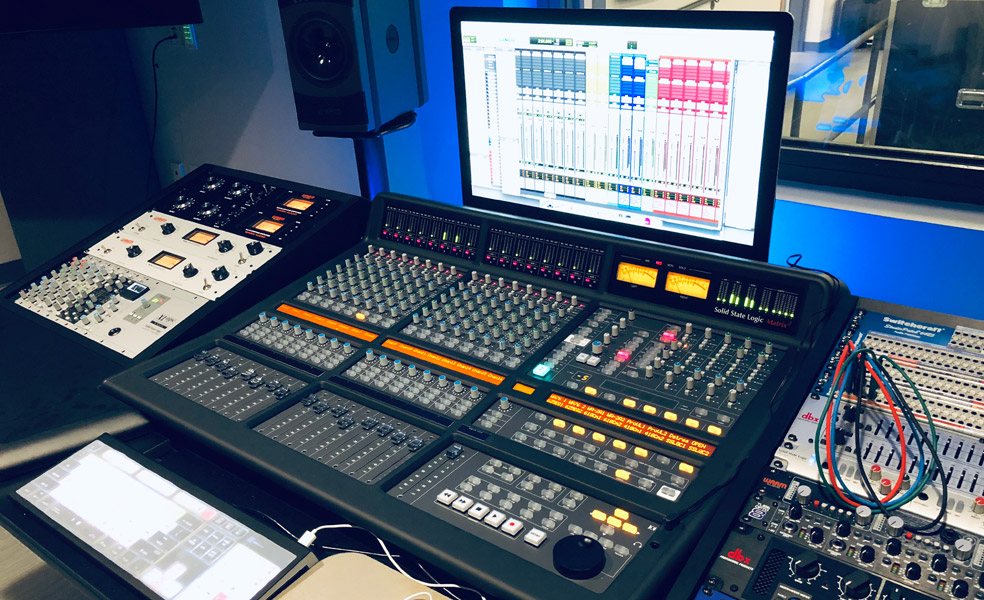 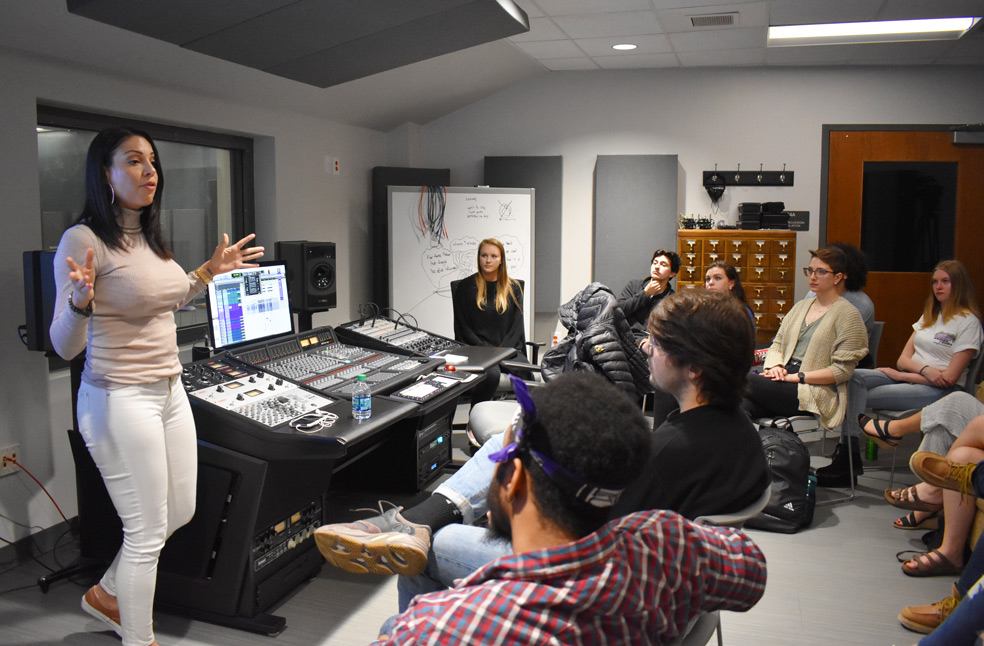 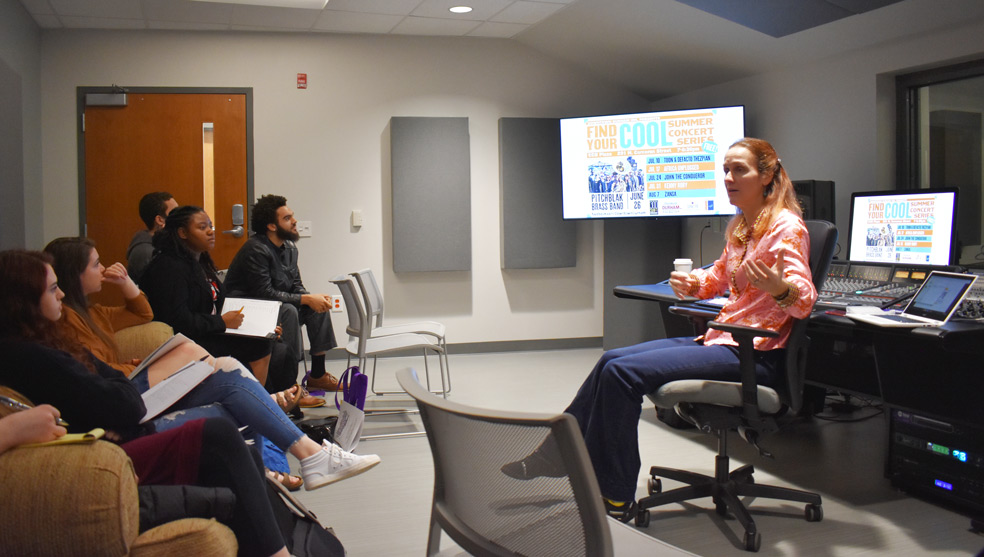 Studio C is a large live room used for tracking larger groups for either Studio A or Studio B control rooms. The Elon Electric Ensemble and Techtronica also rehearse in Studio C. Other uses of the studio include teaching live sound and a meeting space for Limelight, Elon’s student-run record label. Many analog and digital mixing consoles are available for use in Studio C, including our flagship live console, Avid’s Venue S6L. 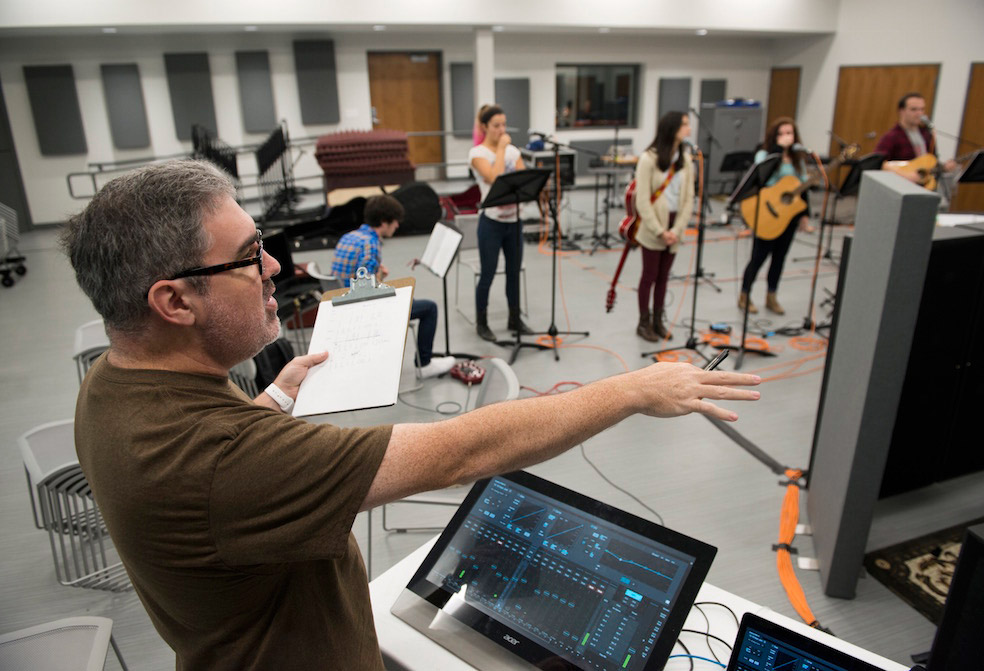 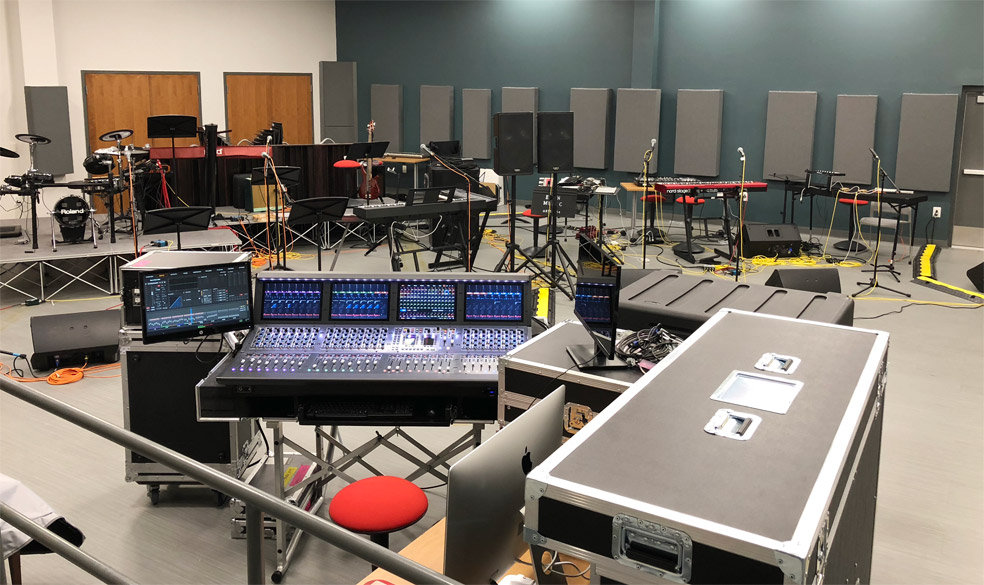 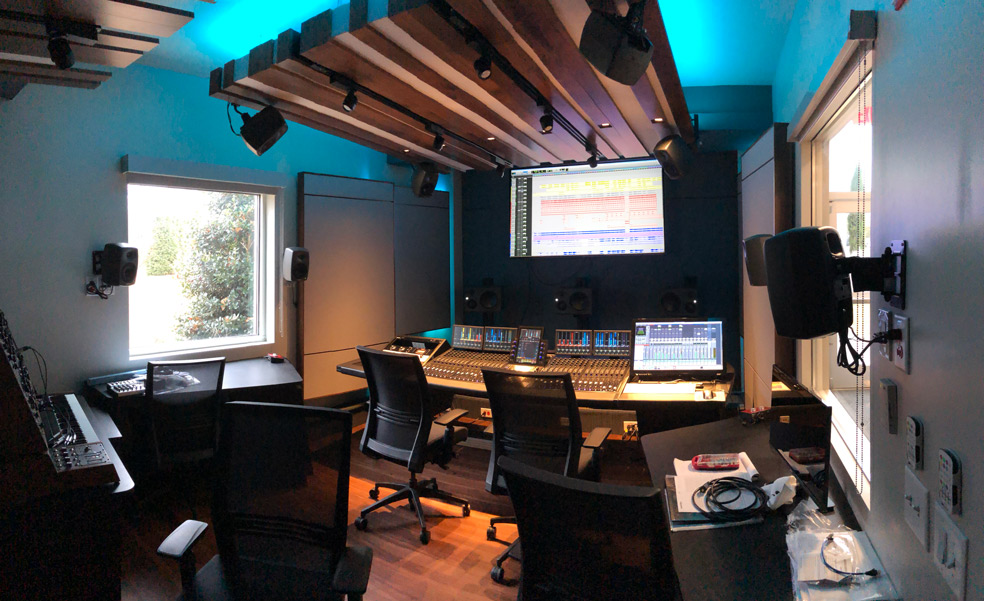 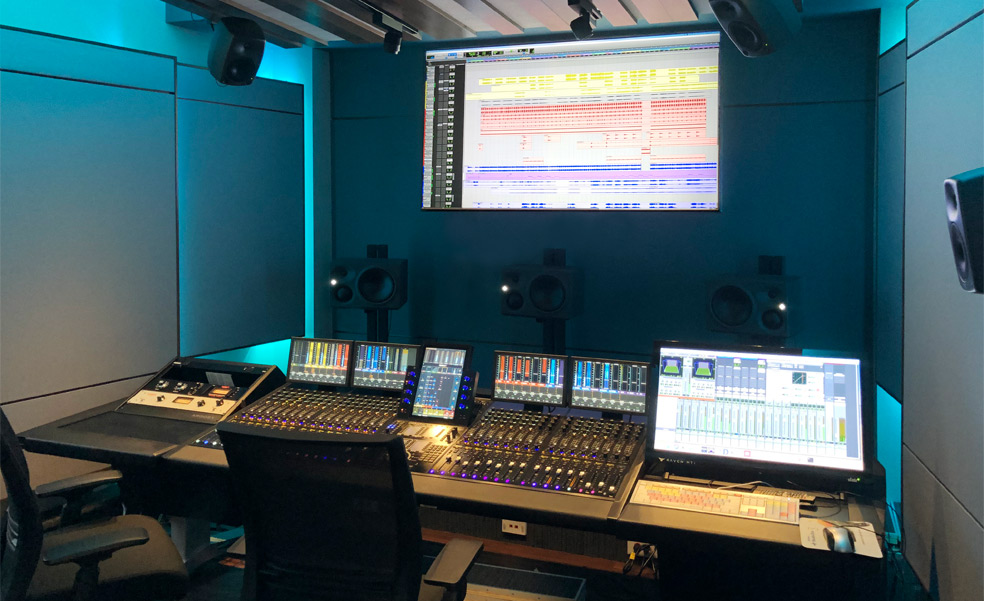 For photographs and more information, visit the Facilities portion of our website.

Students work closely with experienced faculty who are established composers, recording engineers, producers, performing musicians, and music scholars. The curriculum creates a solid foundation in both musicianship and technology, with courses such as music theory, aural skills, applied instrument/voice lessons, performance ensembles, the physics of sound, introduction to music technology, critical listening, studio techniques, music business, and postproduction. Students then build upon these experiences by selecting a concentration that best suits their interests and career goals:

Within Elon’s Music Production & Recording Arts degree program, the concentrations, course offerings, and opportunities to combine minors in other fields such as cinema production, business, computer science, and arts administration, offer flexibility for students to customize their curriculum to best suit their learning goals and career plans. For a detailed list of the courses available in our MPRA curriculum, follow the link below.

Our students have the opportunity to work with guest artists, engineers, producers, music business owners, and many other industry professionals. Below is a list of a few of the guests that have spoken or worked with our MPRA majors on campus. Many others have spoken with our students remotely through video chats.

John Storyk
Architect, acoustician, and founding partner of WSDG. He has provided design and construction supervision services for the professional audio and video recording community since the 1969 design of Jimi Hendrix’s Electric Lady Studios in New York City. You can view a list of some of the places our MPRA students have interned in the past below: 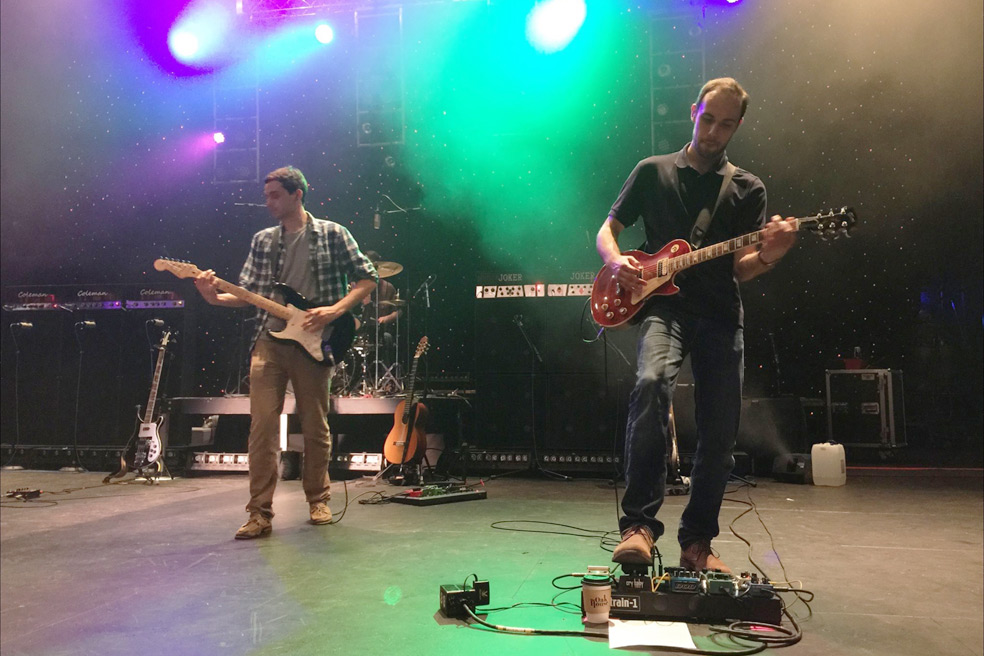 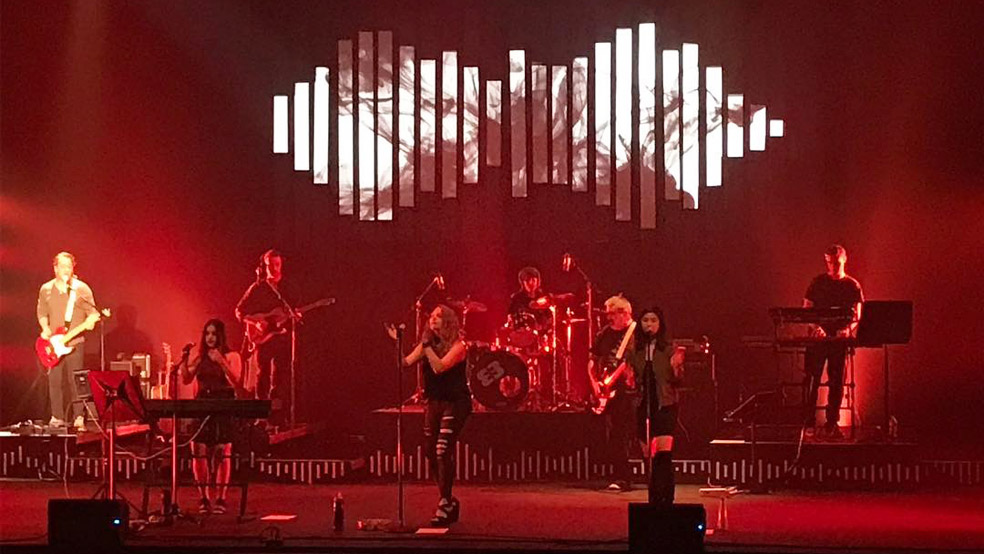 A degree in Music Production & Recording Arts can prepare you for a variety of careers that combine the art of music with applications of technology. An even broader range of careers are available for students who minor or double major in other fields such as communications, cinema production, business, computer science, arts administration, or graduate programs such as a masters of business administration, law, interactive media, etc.

Examples of careers include:

By combining a major in Music Production & Recording Arts with a minor or double-major in another field like Communications, Business, Computer Science, Arts Administration or graduate programs in Business Administration, Law, and Interactive Media, an even wider range of career possibilities are available, such as:

The Department of Music faculty combine a passion for teaching with a vast range of composing, performing, teaching, production, and audio engineering experience. Below are some of the faculty and staff members that work most closely with majors in the Music Production & Recording Arts program. Dr. Todd Coleman is the founding coordinator of Music Production & Recording Arts at Elon University. He is a composer and bassist. His music has been performed by the Minnesota Orchestra, Buffalo Philharmonic Orchestra, Civic Orchestra of Chicago and university ensembles throughout the United States, with commissions for orchestra, wind ensemble, chorus, chamber music and electronic music. He earned his Bachelor of Music degree in music composition and double bass at Brigham Young University. He then went on to attend the prestigious Eastman School of Music, earning his M.M. and D.M.A. degrees in composition and double bass, studying composition with Joseph Schwantner, Christopher Rouse, Augusta Read Thomas, and David Liptak, and double bass with James VanDemark. Much of Coleman’s creative work blurs the boundaries between artistic disciplines, exploiting the intersection of technology and the arts, incorporating multi-channel digital audio and/or video playback, or live signal processing along with acoustic instrumental and vocal performance. He recently completed a five-year term on the Board of Advisors for the Barlow Endowment for Music Composition. Professor Clay Stevenson is a songwriter, composer, audio engineer, and producer specializing in pop, pop/rock, and electronic music.  His music has gained notoriety in feature films including Escapee (Voltage Pictures) and Standing Ovation (Kenilworth Film Productions).  Additionally, while in Los Angeles, Stevenson worked for a number of years in commercial music, extensively with Vision Film and Television Productions composing and designing sound for commercials and corporate videos.  Under the producer name daade, he has collaborated with such artists as DACAV5, El Prezidino, TRev, M:O.R., NPA, and T3.  As daade, Stevenson also presented music in the iStandard Producer’s Showcase at the ASCAP Expo.  Currently, he is writing and composing for Cobel Music and two music production libraries, K.A.P. Music and NOMA Music.  Stevenson has recently designed an innovative course in the study and production of musical mashups.  The course encourages creative art expression through the use of music software to edit and manipulate existing music. Professor Fred Johnson has enjoyed an audio career covering many areas. He has worked in live sound reinforcement and recording for concerts and theater, broadcast for radio and television, audio consulting, video editing, animation production and church sound design. His specialties are the genres of classical and jazz, with his research interests being microphone technique. He earned a BS in Music and a MS in Recording Arts from the University of Colorado-Denver and served on their faculty from 2008-16, teaching classes in Audio Production, Critical Listening and Surround Sound.  He has worked with the Colorado Symphony, the Takacs String Quartet, Dave and Don Grusin, the Colorado Music Festival, Christopher O’Riley, the Boulder Bach Festival, the International Trombone Society and many others. His work has been heard on NPR’s Performance Today and several television networks. He has also produced audio/video projects with groups in France, Lithuania and Senegal. Dr. Carey Harwood has performed and recorded on guitar, banjo, mandolin and lute with rock bands, singers, symphony orchestras, film ensembles, choirs, pit orchestras, opera companies, bluegrass bands and as a soloist throughout the United States and Central America. Before coming to Elon, Carey served on the faculty at the Music Academy of North Carolina, the Rocky Mountain Center for Musical Arts, and the University of Colorado. He also owned and operated a community music school, Carolina String Studio, that served over 300 students and employed 10 instructors. His diverse musical background helps him inspire students to be on the lookout for innovative ways to make a living making music. Dr. Stephen Futrell (choral, trumpet, arranging) has appeared throughout the United States and Europe as a vocalist, trumpeter, writer, arranger, producer and on-screen talent. His experience includes being a featured vocalist at Carnegie Hall and Lincoln Center, as well as serving as a music producer for DreamWorks Animation SKG. He also recently discovered, edited and had published three choral works by Anna Amalia von Sachsen. Dr. Futrell is the Director of Choral Activities at Elon and conducts the department’s a cappella vocal jazz/pop ensemble élan. Rick Earl (live sound, technical director for cultural programs) worked as a live sound engineer for many national touring acts during the 1980’s and 90’s mixing monitors and front of house. Rick joined the Elon University staff in 2006 as Technical Director of Cultural & Special Programs. He works closely as a mentor with Music Production & Recording Arts majors interested in audio engineering and live sound production, sharing his years of experience one-on-one and in small group settings, including supervising live sound student work-study staff.