Perspectives at Play in College Athletics

The Department of Sport Management hosted its annual symposium virtually on April 28, 2021. With a theme of “Perspectives at Play in College Athletics,” the symposium kicked off with a conversation with Oliver Luck, an influential sport industry figure, as well as three panel discussions featuring individuals and student-athletes in collegiate sports. A full recording of the symposium can be found above. 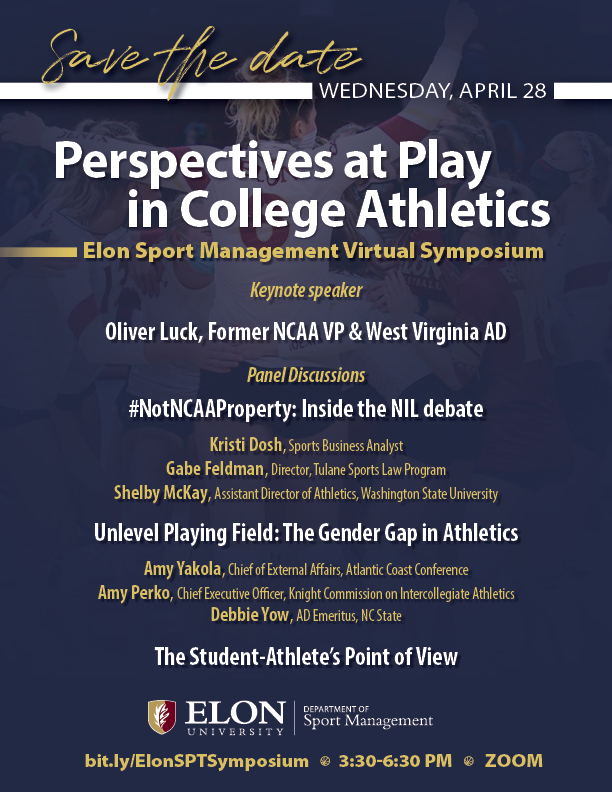 An American business executive and former NFL football quarterback, Oliver Luck was the CEO and commissioner of the XFL until operations were suspended due to the COVID-19 pandemic. Prior to that, Luck was the director of intercollegiate athletics at West Virginia University for four years and served as an NCAA executive in charge of the organization’s regulatory functions. Luck played five seasons for the Houston Oilers.

Panel I – #NotNCAAProperty: Inside the NIL debate

Kristi Dosh
As a sports business reporter/analyst, Dosh has reported on topics from collective bargaining to endorsements to the finances of pro and intercollegiate athletics for outlets such as ESPN, Forbes and Bleacher Report. She is the founder of BusinessofCollegeSports.com and formerly served as ESPN’s sports business reporter. Dosh is the host of The Business of College Sports Podcast and author of “Saturday Millionaires: How Winning Football Builds Winning Colleges.”

Gabe Feldman
Gabe Feldman is the director of the Tulane Sports Law Program and Tulane University’s associate provost for NCAA compliance. One of the leading voices in sports law, Feldman serves on the board of directors of the Sports Lawyers Association and an editor of the Sports Lawyers Journal. Since 2011 he has served as the on-air legal analyst for the NFL Network. Feldman received his bachelor’s degree, master’s degree and juris doctor from Duke University.

Amy Yakola
Amy Yakola is the deputy commissioner – chief of external affairs for the Atlantic Coast Conference, where she has handled several positions over the past two decades. Her positions with the ACC have ranged from media relations intern to senior associate commissioner. She graduated from Clemson University with a bachelor’s degree in mathematics.

Amy Perko
Amy Perko has led the Knight Commission on Intercollegiate Athletics, a panel of American academic, athletic and sports leaders, since 2005, serving as executive director until October 2016 when she was named chief executive officer. In 2012, she received the NCAA’s Silver Anniversary Award, which is given to six former college athletes on the occasion of their 25th anniversary from college participation in recognition of their civic and professional contributions. Three years later, she was named a “Game Changer” by Street & Smith’s Sports Business Journal. She is a member of the Wake Forest Sports Hall of Fame, and was honored as an ACC Legend in 2005. Perko graduated summa cum laude and Phi Beta Kappa in 1987 with a degree in history. She worked at the NCAA for more than six years, before transitioning to the University of Kansas as associate athletics director and senior woman administrator, where she served on several Big 12 Conference and NCAA committees.

The event’s programming was free, but donations were accepted to support the Positive Attitude Youth Center in Burlington.