More than 35 projects from 2022 Kickbox recipients and MakerHub consultants will be on display in Moseley Center for Maker Takeover on Wednesday, April 27, from 4:30 to 6:30 p.m.

Elon University takes a multi-faceted approach to education. Encouraging students to pursue their interests and cultivating a natural sense of curiosity are central to Elon’s educational philosophy. That’s why, for many students, the Maker Hub’s Kickbox program plays such a key role in their experience on campus. 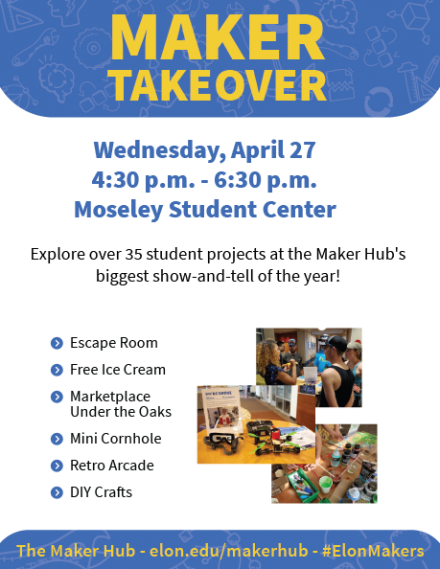 Elon’s Kickbox program challenges students to actively create the products and inventions that they wish someone else would. It provides them with the opportunity to find real-world applications for their niche interests while promoting critical thinking, resilience, and problem-solving skills. At the Maker Takeover event on April 27, the Kickbox recipients for 2022 will present their ideas, enabling the Elon community to witness their creativity firsthand.

For example, take Maia Tice ’22. A mathematics major with a teaching licensure and computer science minor, Tice has been a board game enthusiast since childhood. “I’ve always enjoyed board games and would play them with my family all the time,” she says.

She’s putting this passion into practice with her Kickbox project, a board game that she has tentatively named “Travel Time.” It combines strategy with economics and competition, like a hybrid of Settlers of Catan, Monopoly, and Risk. Players can trade and purchase goods, claim territory, and more.

Another student, Ben Trainum ’24, is building an 8-bit computer with simple “plug and play” components and integrated circuits that don’t require soldering. Trainum is an engineering major, and his natural sense of curiosity is what led him to participate in this year’s Kickbox challenge. While he is fully aware that he’s not “inventing” anything new, Trainum sees a tremendous amount of potential for his project as an educational tool or a way to encourage interest in computer engineering.

“My goal with this project was to take your normal, everyday computer, dumb it down, and then scale it back up,” Trainum says. “Computers nowadays, in a single flat rectangle, do a hundred times more than what it used to take entire rooms to do.”

Trainum is referencing the early days of computer engineering when the physical components that made up a computer were much larger than they are now. His goal with this project is to demystify the inner workings of computers to make them more easily understandable to people who might be intimidated by the complexity of modern devices.

Members of the Elon community will get their chance to witness these students and several others present their projects firsthand at the Maker Takeover. Attendees will also get the chance to try their hand at “Maker Escape,” the Maker Hub’s first-ever escape room, enjoy ice cream made with liquid nitrogen by Elon Dining, support Elon’s entrepreneurs by browsing the items for sale at the pop-up Marketplace under the Oaks, make some DIY crafts, and more.

Sponsor: J.P. Mullican, Technical Director and Instructor in the Department of Performing Arts