Vallabhajosula, an associate professor of physical therapy education, and his final-year DPT students, Sarah Henderson and Brandi Wiltshire, and his URP research mentee Katey Alberto did three virtual platform presentations at the 9th World Congress of Biomechanics conference in July.

The Associate Professor of Physical Therapy Education and Research Coordinator Srikant Vallabhajosula and his students were invited to give oral presentations at the prestigious international conference. Vallabhajosula’s presentation focused on the first National Biomechanics Day outreach event at Elon that was conducted in India by faculty members and students from the departments of Physical Therapy Education, Exercise Science and Performing Arts at Elon in collaboration with a university and a high school in India. 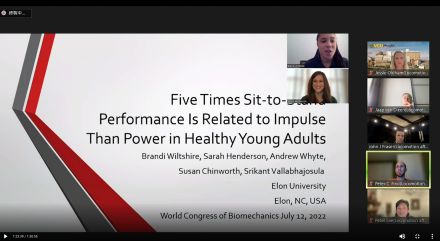 His students presented work on a project that was supported in part by the Undergraduate Research Program.

The following were the citations of their presentations:

In My Words: Congress must act on DACA before year’s end

This opinion column by Elon President Emeritus Leo M. Lambert and Davidson College President Emerita Carol Quillen advocates for the passage of legislation that would allow those who arrived in the country as undocumented children to remain in the country legally. The column was published in the Charlotte Observer, the Raleigh News & Observer and Durham Herald-Sun.

Sponsored by the Division of Inclusive Excellence in collaboration the Gender and LGBTQIA Center, the event offers an opportunity to celebrate graduate and professional students completing their programs in December.