At Elon we recognize that there are many different situations that call for action. Elon encourages students to step up and speak out against all words and actions that go against the values of our Honor Code and create harm for members of our community. In the sections below find out how to get more involved and learn new strategies to intervene today!

We have many different programs, initiatives and workshops that infuse bystander intervention Elon we recognize that there are many. We approach students as potential allies and potential leaders who create culture change within their communities and communicate knowledge and skills to help them do so.

If you want more information on gender based violence initiatives or to get involved, please contact Becca Bishopric Patterson at bbishopric@elon.edu.

We all will encounter situations in which our values as individuals and a community are called into question. We hope that as Elon students, you will take on the responsibility of creating a safe and healthy community for all members. You may be faced with the choice to intervene and help stop a potentially dangerous or harmful situation – responding to a biased statement towards an individual or identity group, stopping someone from driving drunk, standing up to bullying behavior, or preventing sexual assault from occurring.  As a friend, partner, classmate, family member, etc. you are in a unique position to do something about harm when you see it. We encourage you to intervene anytime you notice potential or actual harm but especially in the following scenarios:

In order to help students intervene, we have to realize that there are significant barriers to acting even when people want to “do the right thing.”  The Bystander Effect is a result of a diffusion of responsibility when many present to witness an event and therefore, assume that someone else will act. Other than size of the group, here are a few other factors that influence a student’s willingness to intervene:

Our goal is to start by helping students intervene when the risks are lower, for example, when a friend uses biased language unintentionally. If students feel more able and willing to intervene in less extreme situations, then they will build confidence and skills to intervene in higher stakes scenarios, such as saying something at a party when someone is being harassed or taken advantage of, or supporting a family member when confronting an abusive relative.

The image below describes the process we use to help students learn to intervene. We encourage students to consider all of their options when intervening in a potentially harmful situation and to prioritize their physical safety and the physical safety of others. 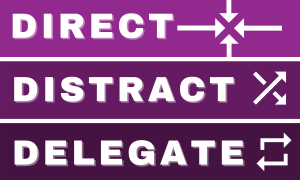 Below are examples of what bystanders or friends may notice for people experiencing the following issues:

We recognize and support that there is no one or correct way that individuals respond to trauma and violence perpetrated against them. Below are examples of common responses to violence.

This content was adapted from various sources including: Samuel Merritt University and UNC-CH.