The Development of the Telegraph

The idea behind the telegraph – sending electric signals across wires – originated in the early 1700s, and by 1798 a rough system was used in France. New York University professor Samuel Morse (pictured at left) began working on his version of the telegraph in 1832; he developed Morse Code (a set of sounds that corresponded to particular letters of the alphabet), in 1835; and by 1838 he had presented his concept to the U.S. Congress. He was not the first to think of the idea – 62 people had claimed to invent the first electrical telegraph by 1838 – but Morse beat everyone else to by being the first to get political backing for his telegraph and a business model for making it work.

In 1843, Morse built a telegraph system from Washington, D.C., to Baltimore with the financial support of Congress. On May 24, 1844, the first message, “What hath God wrought?” was sent. The telegraph system progressed slowly, and many attempts failed to make the system work for the entire country. Morse slowly continued to spread his invention and he extended the telegraph line to New York. At the same time, other companies began taking notice of the impact of the telegraph and they opened their own systems in other parts of the country. Western Union built its first transcontinental telegraph line in 1861.

At first, telegraph messages were transmitted by trained code users, but in 1914 a form of automatic transmission was developed. This made the message transmission much faster. At the turn of the 20th century, all long-distance communication depended heavily on the telegraph.

At the end of the 19th century, demands for constraints on Western Union’s power resulted in the passage of the Mann-Elkins Act of 1910, granting the Interstate Commerce Commission regulatory oversight of telegraph rates. Later, the Communications Act of 1934 switched regulation of the telegraph industry to the newly created Federal Communications Commission. By this time, the radio and telephone had diminished the impact of the telegraph.

World Changes Due to the Telegraph

Prior to the telegraph, communication in the 1830s was about the same as it had been in the years just after Gutenberg’s invention of the printing press. It took days, weeks, and even months for messages to be sent from one location to a far-flung position. After the telegraph cable was stretched from coast to coast in the 1850s, a message from London to New York could be sent in mere minutes, and the world suddenly became much smaller.

Prior to the telegraph, politics and business were constrained by geography. The world was divided into isolated regions. There was limited knowledge of national or international news, and that which was shared was generally quite dated. After the telegraph, the world changed. It seemed as if information could flow like water.

By the 1850s, predictions about the impact of the new medium began to abound. The telegraph would alter business and politics. It would make the world smaller, erase national rivalries and contribute to the establishment of world peace. It would make newspapers obsolete. All of the same statements were made in the 1990s by people who were wowed by the first-blush potential of the Internet.

Past Predictions About the Future of the Telegraph

“This mode of instantaneous communication must inevitably become an instrument of immense power, to be wielded for good or for evil, as it shall be properly or improperly directed.”

The reaction of Senator Smith of Indiana after a demonstration of the telegraph by Morse for members of Congress in 1842, as reported in the 1915 book “A History of Travel in America”:

“I watched his countenance closely, to see if he was not deranged … and I was assured by other senators after we left the room that they had no confidence in it.”

When Congress was asked to provide funds for a telegraph line between Baltimore and New York City, the Congressional Globe (28th Congress, second session) reported that Sen. George McDuffie opposed it, explaining that he asked:

“…What was this telegraph to do? Would it transmit letters and newspapers? Under what power in the constitution did Senators propose to erect this telegraph? He was not aware of any authority except under the clause for the establishment of post roads. And besides the telegraph might be made very mischievous, and secret information after communicated to the prejudice of merchants.” 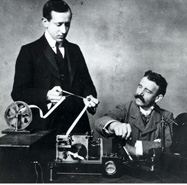 When Morse offered to sell his telegraph to the U.S. government for $100,000, the postmaster general rejected the offer. James D. Reid explained the rejection in his 1879 book “The Telegraph in America”:

“… the operation of the telegraph between Washington and Baltimore had not satisfied him that under any rate of postage that could be adopted, its revenues could be made equal to its expenditures.”

When the first transatlantic cable was built from England to the United States and President Buchanan and Queen Victoria exchanged messages in 1858, a writer for the Times of London raved:

“Tomorrow the hearts of the civilized world will beat in a single pulse, and from that time forth forevermore the continental divisions of the earth will, in a measure, lose those conditions of time and distance which now mark their relations.”

Authors Charles F. Briggs and Augustus Maverick wrote in their 1858 book “The Story of the Telegraph”:

“Of all the marvelous achievements of modern science the electric telegraph is transcendentally the greatest and most serviceable to mankind … The whole earth will be belted with the electric current, palpitating with human thoughts and emotions … How potent a power, then, is the telegraphic destined to become in the civilization of the world! This binds together by a vital cord all the nations of the earth. It is impossible that old prejudices and hostilities should longer exist, while such an instrument has been created for an exchange of thought between all the nations of the earth.”