Development of Television
World Changes Due to Television
Television Predictions 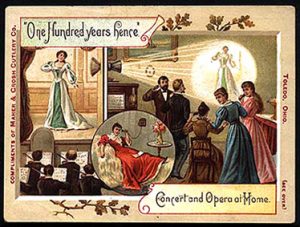 The Development of Television

Writers such as Walter Scott, Jules Verne, Mark Twain, and H.G. Wells began postulating the idea of “seeing at a distance” – as the earliest concepts of television were predicted in the 18th and 19th centuries. Scientists from around the world worked to perfect television for decades, with the key breakthroughs coming in the early 20th century, the invention springing from the work of many minds. The 1890s advertising card shown above depicts a representation of the possible future of “home theater.” 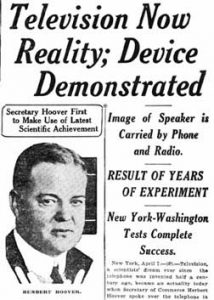 American inventor Charles Francis Jenkins transmitted pictures of Herbert Hoover, then Secretary of Commerce, from Washington to Philadelphia by radio in 1923, and he demonstrated a mechanical television scanning system using a revolving disk in 1925. He called his invention “radiovision.” He correctly predicted: “It will not be very long now before one may see on a small white screen in one’s home notable current events, like inaugural ceremonies, ball games, pageants, as well as pantomime performance broadcast from motion-picture film.” But Jenkins’ system was slow and its images were murky.

American Telephone & Telegraph also got into the act in the early days of television, transmitting moving images of Herbert Hoover from Washington to New York over phone circuits in 1927 using a 185-line system developed by Herbert E. Ives. In 1928, General Electric began broadcasting a 24-line mechanical image from a New York station thanks to engineer Ernest Alexanderson’s development of a mechanical television system. German Denes von Mihaly, Kenjiro Takayanagi of Japan and Scottish engineer John Logie Baird built various systems in the 1920s, but none of them is seen as the “inventor” of TV. 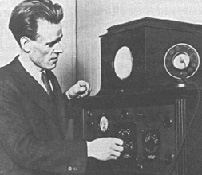 Philo Taylor Farnsworth, 21, (pictured at left) developed what he called the “image dissector,” the first working electronic camera tube, in San Francisco in 1927. As a youngster growing up in Utah and Idaho he’d read in a magazine about the idea of the broadcasting of images and sound, becoming so fascinated that he was motivated to study molecular theory and electricity. His work led him to invent the first fully electronic television system.

In the late 1920s, Radio Corporation of America president David Sarnoff was intrigued with Farnsworth’s work, and he sent engineer Vladimir Zworykin to visit Farnsworth’s lab. He returned to RCA and by 1933 he had perfected his “inconoscope” – an invention nearly identical to Farnsworth’s image dissector. A patent battle ensued. Litigation followed for many years, with a series of appeals before Sarnoff finally agreed to pay Farnsworth royalties.

In the 1930s, a number of experimental broadcast stations began producing some special television programming. Radio powers NBC and CBS built New York stations. World War II impeded the development of the medium, slowing it as people and materials were directed to this major world conflict. Television replaced radio as the dominant broadcast medium by the 1950s and took over home entertainment. Approximately 8,000 U.S. households had television sets in 1946; 45.7 million had them by 1960. 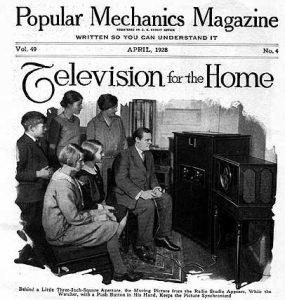 World Changes Due to Television

The pace of innovation and improvements in television and other information technologies developed in the United States over the past 100 years has been rapid, thanks to a confluence of several factors: the competitive atmosphere of the free-market economy; the laid-back role of government, which is a watchdog thus far preventing wholesale monopolies; and the spirit of invention and entrepreneurship prevalent in U.S. society.

Because other nations usually have had some sort of government control of communications technologies, they have not developed as much quality program content for television over the decades. Regulation stifled creativity and constrained production, and the economics of regulation created a situation in which producers of U.S. programming found themselves making broadcast content for the entire world.

The worldwide success of the freewheeling U.S. film and television industries over the course of the 20th century has spread images of the American culture – good and bad – to the most-distant corners of the planet. It has made entertainment one of the nation’s most lucrative and influential exports.

Past Predictions About the Future of Television

“While theoretically and technically television may be feasible, commercially and financially I consider it to be an impossibility…a development of which we need waste little time dreaming.”

“There may come a time when we shall have ‘smellyvision’ and ‘tastyvision’. When we are able to broadcast so that all the senses are catered for, we shall live in a world which no one has yet dreamt about.”

“Spectacles may be staged in distant cities and be transmitted for the entertainment of individuals hundreds of miles away. Conversations may be held across the sea and the parties see each other as clearly as though they were gathered in the same room. Distance will be annihilated for sound and sight and the world made immeasurably smaller for the purposes of communication.”

“Human genius has now destroyed the impediment of distance in a new respect, and in a manner hitherto unknown.”

British television pioneer John Logie Baird – whose experiments were with mechanical television – said during a visit to the U.S. in September 1931: 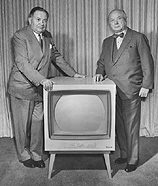 A 1939 New York Times review of a demonstration of television at the 1939 World’s Fair:

“The problem with television is that people must sit and keep their eyes glued on a screen; the average American family hasn’t time for it.”

George Boar, a farmhand from Suffolk, was quoted in the Feb. 1939 issue of Radio Times in an interview just after he had “invested his whole fortune” to buy a television receiver:

“Television’s far more entertaining and much less trouble than a wife would be.”

“Television won’t be able to hold on to any market it captures after the first six months. People will soon get tired of staring at a plywood box every night.”

“It is inevitable that television will become the primary service and sound radio the secondary one.”

“I am very skeptical of this talk of 500 channels. I just don’t know what’s going to play on them.”