The Development of the Telephone

As with many innovations, the idea for the telephone came along far sooner than it was brought to reality. While Italian innovator Antonio Meucci (pictured at left) is credited with inventing the first basic phone in 1849, and Frenchman Charles Bourseul devised a phone in 1854, Alexander Graham Bell won the first U.S. patent for the device in 1876. Bell began his research in 1874 and had financial backers who gave him the best business plan for bringing it to market.

In 1877-78, the first telephone line was constructed, the first switchboard was created and the first telephone exchange was in operation. Three years later, almost 49,000 telephones were in use. In 1880, Bell (in the photo below) merged this company with others to form the American Bell Telephone Company and in 1885 American Telegraph and Telephone Company (AT&T) was formed; it dominated telephone communications for the next century. At one point in time, Bell System employees purposely denigrated the U.S. telephone system to drive down stock prices of all phone companies and thus make it easier for Bell to acquire smaller competitors. 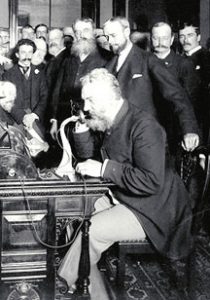 By 1900 there were nearly 600,000 phones in Bell’s telephone system; that number shot up to 2.2 million phones by 1905, and 5.8 million by 1910. In 1915 the transcontinental telephone line began operating. By 1907, AT&T had a near monopoly on phone and telegraph service, thanks to its purchase of Western Union. Its president, Theodore Vail, urged at the time that a monopoly could most efficiently operate the nation’s far-flung communications network. At the urging of the public and AT&T competitors, the government began to investigate the company for anti-trust violations, thus forcing the 1913 Kingsbury Commitment, an agreement between AT&T vice president Nathan Kingsbury and the office of the U.S. Attorney General. Under this commitment, AT&T agreed to divest itself of Western Union and provide long-distance services to independent phone exchanges.

During World War I, the government nationalized telephone and telegraph lines in the United States from June 1918 to July 1919, when, after a joint resolution of Congress, President Wilson issued an order putting them under the direction of the U.S. Post Office. A year later, the systems were returned to private ownership, AT&T resumed its monopolistic hold, and by 1934 the government again acted, this time agreeing to allow it to operate as a “regulated monopoly” under the jurisdiction of the FCC.

Public utility commissions in state and local jurisdictions were appointed regulators of AT&T and the nation’s independent phone companies, while the FCC regulated long-distance services conducted across state lines. They set the rates the phone companies could charge and determined what services and equipment each could offer. This stayed in effect until AT&T’s forced divestiture in 1984, the conclusion of a U.S. Department of Justice anti-trust suit that had been filed in 1974. The all-powerful company had become popularly known and disparaged as “Ma Bell.” AT&T’s local operations were divided into seven independent Regional Bell Operating Companies, known as the “Baby Bells.” AT&T became a long-distance-services company.

By 1948, the 30 millionth phone was connected in the United States; by the 1960s, there were more than 80 million phone hookups in the U.S. and 160 million in the world; by 1980, there were more than 175 million telephone subscriber lines in the U.S. In 1993, the first digital cellular network went online in Orlando, Florida; by 1995 there were 25 million cellular phone subscribers, and that number exploded at the turn of the century, with digital cellular phone service expected to replace land-line phones for most U.S. customers by as early as 2010.

World Changes Due to the Telephone 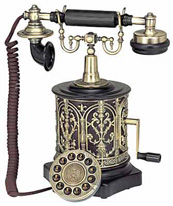 Within 50 years of its invention, the telephone had become an indispensable tool in the United States. In the late 19th century, people raved about the telephone’s positive aspects and ranted about what they anticipated would be negatives. Their key points, recorded by Ithiel de Sola Pool in his 1983 book “Forecasting the Telephone,” mirror nearly precisely what was later predicted about the impact of the internet.

For example, people said the telephone would: help further democracy; be a tool for grassroots organizers; lead to additional advances in networked communications; allow social decentralization, resulting in a movement out of cities and more flexible work arrangements; change marketing and politics; alter the ways in which wars are fought; cause the postal service to lose business; open up new job opportunities; allow more public feedback; make the world smaller, increasing contact between peoples of all nations and thus fostering world peace; increase crime and aid criminals; be an aid for physicians, police, fire, and emergency workers; be a valuable tool for journalists; bring people closer together, decreasing loneliness and building new communities; inspire a decline in the art of writing; have an impact on language patterns and introduce new words; and someday lead to an advanced form of the transmission of intelligence.

Privacy was also a major concern. As is the case with the Internet, the telephone worked to improve privacy while simultaneously leaving people open to invasions of their privacy. In the beginning days of the telephone, people would often have to journey to the local general store or some other central point to be able to make and receive calls. Most homes weren’t wired together, and eavesdroppers could hear you conduct your personal business as you used a public phone. Switchboard operators who connected the calls would also regularly invade people’s privacy. The early house-to-house phone systems were often “party lines” on which a number of families would receive calls, and others were free to listen in and often chose to do so.

Today, while most homes are wired and people can travel freely, conducting their phone conversations wirelessly, wiretapping and other surveillance methods can be utilized to listen in on their private business. People’s privacy can also be interrupted by unwanted phone calls from telemarketers and others who wish to profit in some way – just as Internet e-mail accounts receive unwanted sales pitches, known as “spam.”

Yet, the invention of the telephone also worked to increase privacy in many ways. It permitted people to exchange information without having to put it in writing, and a call on the phone came to replace such intrusions on domestic seclusion as unexpected visits from relatives or neighbors and the pushy patter of door-to-door salesmen. The same could be said for the Internet – privacy has been enhanced in some ways because e-mail and instant messaging have reduced the frequency of the jangling interruptions previously dished out by our telephones.

Past Predictions About the Future of the Telephone

President Rutherford B. Hayes to Alexander Graham Bell in 1876 on viewing the telephone for the first time:

“That’s an amazing invention, but who would ever want to use one of them?”

Bell offered to sell his telephone patent to Western Union for $100,000 in 1876, when he was struggling with the business. An account that is believed by some to be apocryphal, but still recounted in many telephone histories states that the committee appointed to investigate the offer filed the following report: 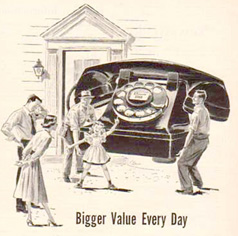 “We do not see that this device will be ever capable of sending recognizable speech over a distance of several miles. Messer Hubbard and Bell want to install one of their ‘telephone devices’ in every city. The idea is idiotic on the face of it. Furthermore, why would any person want to use this ungainly and impractical device when he can send a messenger to the telegraph office and have a clear written message sent to any large city in the United States? … Mr. G.G. Hubbard’s fanciful predictions, while they sound rosy, are based on wild-eyed imagination and lack of understanding of the technical and economic facts of the situation, and a posture of ignoring the obvious limitations of his device, which is hardly more than a toy … This device is inherently of no use to us. We do not recommend its purchase.”

As reported in the book “Bell” by Robert V. Bruce, Kate Field, a British reporter who knew Bell, predicted in 1878 that eventually:

“While two persons, hundreds of miles apart, are talking together, they will actually see each other.”

Sir William Preece, chief engineer for the British Post Office, 1878, as reported in “The Telephone in a Changing World” by Marion May Dilts:

“There are conditions in America which necessitate the use of such instruments more than here. Here we have a superabundance of messengers, errand boys and things of that kind … The absence of servants has compelled America to adopt communications systems for domestic purposes.”

“A system of telephony without wires seems one of the interesting possibilities, and the distance on the earth through which it is possible to speak is theoretically limited only by the curvation of the earth.”

“Someday we will build up a world telephone system, making necessary to all peoples the use of a common language or common understanding of languages, which will join all the people of the earth into one brotherhood. There will be heard throughout the earth a great voice coming out of the ether which will proclaim, ‘Peace on earth, good will towards men.'”

In the 1912 article “The Future Home Theatre” in The Independent, S.C. Gilfillan wrote:

“There are two mechanical contrivances … each of which bears in itself the power to revolutionize entertainment, doing for it what the printing press did for books. They are the talking motion picture and the electric vision apparatus with telephone. Either one will enable millions of people to see and hear the same performance simultaneously .. or successively from kinetoscope and phonographic records … These inventions will become cheap enough to be … in every home … You will have the home theatre of 1930, oh ye of little faith.”