Combine your interest in gaming with your education

The decades-long rise of esports

In the last two decades esports has become a billion-dollar industry on a trajectory that rivals large-scale sports programs and big revenue generators like football, basketball and other high-profile sports. This isn’t news to many. Esports has become largely mainstream with its athletes widely viewed as celebrities, tournaments filling arenas with adoring fans, and sponsors ready to invest in the gaming ecosystem. 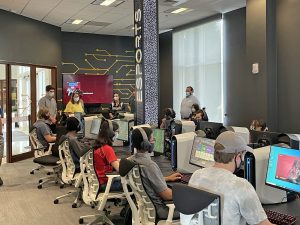 In fall 2021, the university opened the Elon Club Esports space inside of Global Commons dedicated to the 50 students who competitively challenge other club esports programs and the other 100 members who are leisurely involved with esports.

From classic Nintendo games like Super Smash Bros., to high-intensity, first-person shooter games like Call of Duty, esports has brought video games and competition to a worldwide stage, including Elon’s campus.

Elon Club Esports is a university-recognized organization that supports students interested in esports, connecting players to tournaments and other esports-related events such as viewing parties and in-house competitions. Each year, the club forms teams based on interest competing in popular games such as League of Legends, Overwatch, Rainbow Six: Siege, Rocket League and the aforementioned Super Smash Bros.

In 2021, the university constructed an Elon Club Esports space inside of Global Commons. The space was created to address the club’s exponential growth in recent years.

“There’s so much excitement around this space and it’s been building for the last several years, so it’s great to see this come to fruition,” said Larry Mellinger, director of Campus Recreation and Wellness, at the gaming room’s grand opening. “This space is representative of an evolving recreation and wellness needs on campus and how we’re responsive to those needs.”

Learn the business of esports, how to broadcast and produce its events, and gain a better understanding of technology management right here on campus.

At Elon, you can compete in, broadcast … and create esports. In 2019, the university introduced a Game Design Minor, a multidisciplinary program that teaches students to develop, design and implement computer games. The minor, offered by the Department of Computer Science, is open to students of all backgrounds. The minor’s curriculum consists of four courses: Game Design, Computer Game Production and Collaborative Game Development I and II.

A master’s degree in 10 months Thinking of taking your undergraduate degree to the next level? In 10 months and 12 courses, Elon’s Interactive Media master’s program will teach you the latest coding, graphic design and production techniques – including JavaScript for data visualization and interactivity.

Create your own curriculum focused on game design. iMedia offers more than a dozen electives to choose from, including Virtual Environments, studying three-dimensional online environments and massively multiplayer online games, and Game Design and Development, where students are introduced to the process of designing, prototyping and developing games.

In less than a year, our iMedia graduates have been ready for careers with CBS Interactive, ESPN, Google, IBM, Microsoft and The Oprah Winfrey Network. To kick off the 2018-19 academic year, the School of Communications hosted a faculty and staff advance meeting that took a deep dive into esports and the industry’s tremendous growth and untapped potential. To help facilitate the conversation, the school welcomed Craig Levine (pictured), Co-CEO of ESL Gaming, to campus to give an introduction to gaming. Later that day the school also Skyped with Patrick Wixted, senior vice president of client services director of Ketchum Sports, about the esports industry.

In 2019, the Sport Management Society expanded on the school’s gaming conversation, hosting a discussion with Marc Williams, managing partner of Williams Communications, and Marc Appleton, CEO of HOME: The Baseball Experience and former CEO of the Society for American Baseball Research (SABR). Williams is in partnership with the U.S. Department of Education to identify esports programming and funding for Historically Black Colleges and Universities.