Alumni remain a part of the Elon family long after they graduate. Our graduates are innovators, entrepreneurs, communicators, volunteers, ethical leaders and problem-solvers. Elon’s alumni network of more than 30,000 spans the globe, making a difference in every corner of the world. Visit the Alumni Programs website to learn more.

The Honduras native hosts a daily entertainment segment on the morning show, as well as “Maity on the Road,” a behind-the-scenes look at her experiences on assignments on Univision.com. She covers a variety of events, including the Latin Grammy Awards, Rose Parade, Golden Globe Awards and the Oscars.

Maity’s coverage of Desfile de Las Rosas 2015 for Univision Network earned her an Emmy Award in 2017. She was named best host in the Favoritos del Publico portion of the TVyNovelas Awards in 2014. 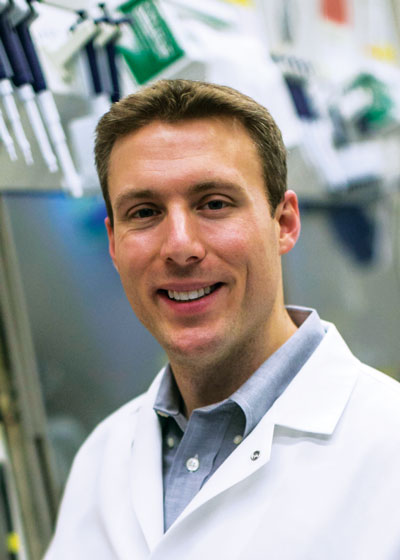 Geoff, a biomedical scientist, co-developed a personalized cancer vaccine with colleagues at the National Institutes of Health, University of Oxford and the Institute of Macromolecular Chemistry. Later this year, Avidea Technologies, the company he co-founded and where he is chief executive officer, will begin clinical trials of the vaccine as a treatment for patients with advanced cancers.

While at Elon, Geoff’s undergraduate research focused on targeted drug delivery. The work earned him a prestigious Goldwater Scholarship as well as a National Science Foundation Graduate Research Fellowship, which allowed him to do research at the NIH and earn a doctoral degree at the University of Oxford. Through an M.D./Ph.D. program at Johns Hopkins University, he earned a doctorate in biomedical engineering and spent two years in medical school. He plans to finish medical school once clinical trials for the vaccine are completed. 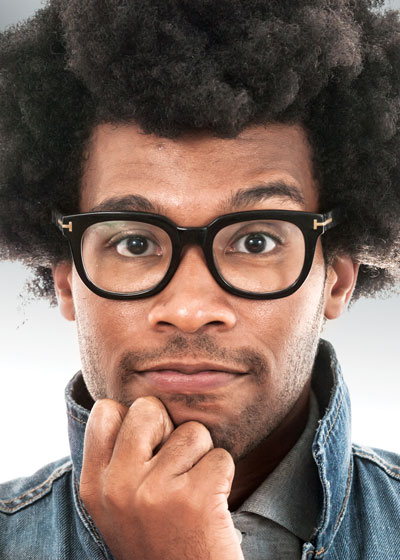 Phil is the director of business leadership for Momentum Worldwide, a marketing and advertising agency. His client is American Express and he runs lifestyle activations for music festivals.

Prior to Momentum, Phil lived in Shanghai and Hong Kong while working for Imagination, a British marketing and communications agency, and managing some of the world’s biggest brands, including Ford, Lincoln, GE, adidas, UBS  and Disney. 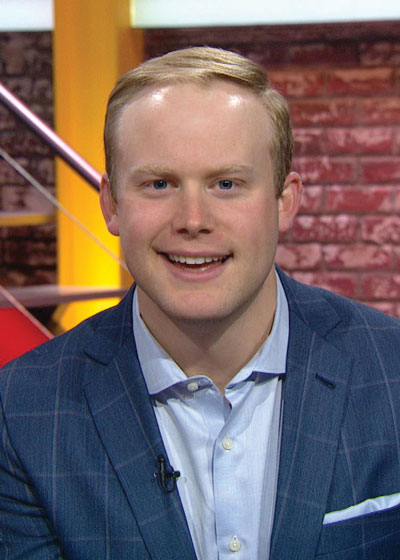 Josh is a NFL writer and podcaster for NBC Sports and Rotoworld. Since the Panthers played their first game in 1995 in Charlotte, North Carolina, football has dominated his interests. He’s gone from being an excited 8-year-old inside Ericsson Stadium (now Bank of America Stadium), to obsessing about random player facts while in high school, to becoming an NFL writer and podcaster.

While pursuing his degree at Elon, Josh and a friend created their own show on Elon’s student-run radio station, WSOE 89.3. A few years later, he was a consistent face in One on One sports, and helped the television show produce their first simulcast of an NFL draft. Those student media experiences propelled him to land summer internships at WFNZ in Charlotte after his first year, Fox Sports Radio in Los Angeles after his junior year and a scouting assistant role with the St. Louis Rams (now Los Angeles Rams) prior to graduation.

Now working out of NBC Sports headquarters in Stamford, Connecticut, Josh focuses on football year-round. What started as a job with a “writer” title has morphed into on-camera work on countless live television shows, hosting and producing NBC Sports’ most successful original podcast and anchoring weekly football shows during football season on NBC digital platforms. 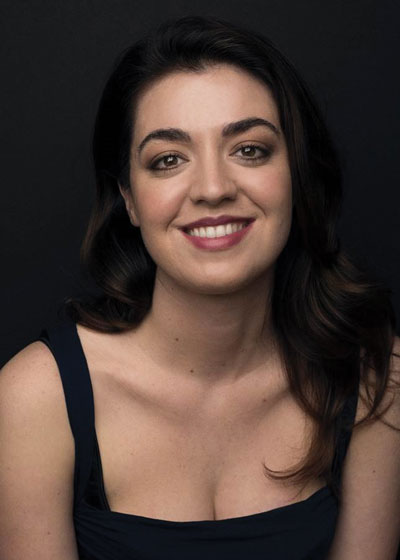 Since as far back as she can remember, theater has been an important part of Barrett’s life. A native of Cambridge, Massachusetts, she started performing with the Boston Children’s Opera when she was 5. She later attended Walnut School for the Arts, where her passion for the craft was solidified.

But it was at Elon where Barrett gained many technical skills as well as the self-confidence to trust herself and jump into a professional career. After graduating from Elon, she moved to New York City. She soon made her Broadway debut as an understudy for several of the female roles in “Lysistrata Jones.” She played Nadia in the Off-Broadway production of “Bare: The Musical” and later originated the role of Veronica Sawyer in the Los Angeles premiere of “Heathers: The Musical,” a performance that earned her Lucille Lortel Award and Drama Desk Award nominations in 2014 and set the tone for future strong female roles.

Barrett played Denise in the Off-Broadway musical “FOUND The Musical” before playing the role of the vivacious Sally Bowles in the Signature Theatre production of “Cabaret,” which earned her the prestigious Helen Hayes Award for Outstanding Lead Actress in a Musical in 2016.

She is now playing the rebellious Janis Sarkisian in Tina Fey’s Broadway smash “Mean Girls.” Her performance of “I’d Rather Be Me,” one of the show’s tunes, on “The Tonight Show Starring Jimmy Fallon” last spring earned her a standing ovation. If her dreams come true, you can expect to see Barrett playing more young adult characters on TV and in films soon.

A life-long athlete and sports fan, Emily has built a career in sports communications that has spanned the globe. For nine years she worked at top global lifestyle and communications agencies in New York and London, where she specialized in sports marketing and media and influencer relations.

Throughout her career, Emily has led global communications campaigns across five continents in more than 100 markets. This includes working on global brand campaigns for the Olympics, World Cup, UEFA Champions League, Formula 1, various other endurance events and all major U.S. sports leagues for top brands.

During her time at Elon, Emily was actively involved in various campus organizations, including the Isabella Cannon Leadership Fellows Program, Phoenix Phanatics, New Student Orientation and First-Year Summer Experience. She participated in club and intramural sports and also served as an admissions tour guide. 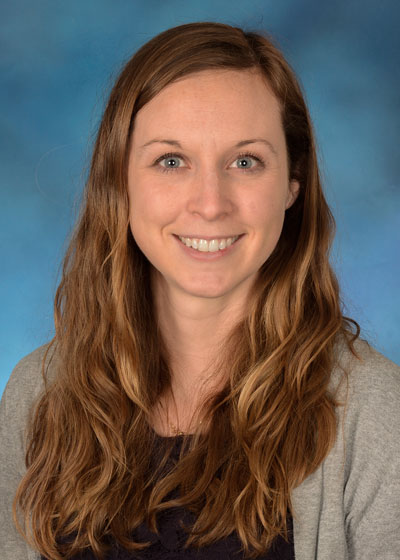 As a biochemistry major and Honors Fellow with a public health minor, Hannah cultivated unique interests while at Elon, which led her to pursue a career in public health research.

After graduation, she completed a Master of Public Health degree from George Washington University and a doctoral degree in community and behavioral science from Virginia Tech. She is now finishing a postdoctoral fellowship and preparing to transition to assistant professor at the University of Maryland School of Medicine in Baltimore.

As a researcher, Hannah partnered with organizations focusing on young people in underserved communities, from a coal town in Appalachian Virginia to the neighborhoods of West Baltimore, to evaluate innovative policies and programs designed to increase access to healthy foods, opportunities for physical activity and health literacy skills among hard-to-reach children. Through her research, she aims to provide all children with opportunities to be healthy, active and free of chronic disease.

Hannah is the youngest member of the founding Board of Directors for IQ Community Solutions Institute, a nonprofit that collaborates with community-based organizations to address health issues in the Washington, D.C. area. 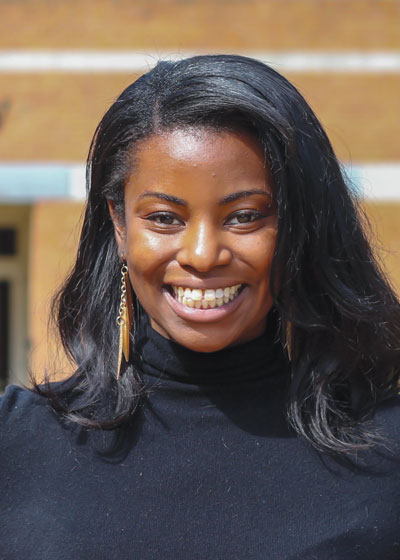 Jasmine always had a passion for giving a voice to the voiceless. She earned a degree in strategic communications with minors in African-American studies and history at Elon before pursuing a law degree from Wake Forest University School of Law in 2015.

While at Elon, Jasmine was heavily involved in several campus activities and organizations, including Alpha Kappa Alpha, Lamda Pi Eta, Phi Alpha Theta and the Black Cultural Society. She also served as a tour guide for the Office of Admissions and contributed to the opinions section of The Pendulum, the student-run newspaper.

After graduating, she worked with the United Way of Greater Greensboro, where she became acquainted with the work of Legal Aid of North Carolina, an experience that led her to pursue a law degree with an emphasis on criminal procedure, family law and child advocacy.

While at Wake Forest, Jasmine worked part-time for the Adam Foundation in Winston-Salem, where she served as the foundation development specialist raising money and planning events for LGBTQ initiatives in the area. She also led the school’s robust Pro Bono Project during her final year of law school, managing a board consisting of law students and community projects designed to increase access to justice among low-income populations.

Jasmine graduated from Wake in 2018 and received the North Carolina State Bar Student Pro Bono Service award for outstanding pro bono service in the Winston-Salem area. She is now a member of the Forsyth County Bar Association and serves as a family law attorney at a small private practice specializing in high conflict custody battles, divorce proceedings and domestic abuse cases. In addition to her private practice work, she also does court-appointed work in Stokes County, North Carolina, representing poor parents in juvenile abuse cases. 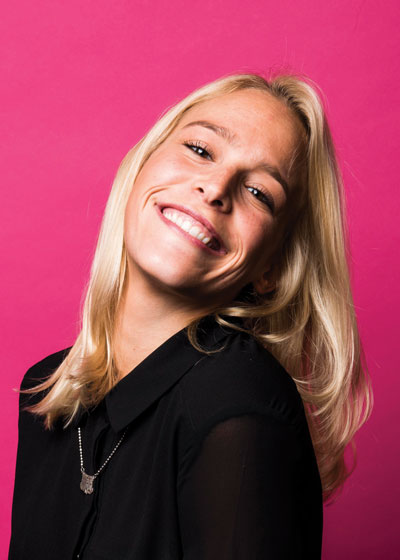 Alanna always championed for women’s rights, but she didn’t realize she could turn her passion into a career until she arrived at Elon University in 2009. With the help of her mentor, Associate Professor of Religious Studies Amy Allocco, Alanna independently majored in women’s and gender studies.

During her time at Elon, Alanna was involved with Spectrum, the university’s queer-straight student alliance, and was also part of the Zeta Tau Alpha fraternity. She studied abroad with the Semester at Sea program and traveled to India for a Winter Term course. She concluded her senior year with an internship at Lillian’s List, a political nonprofit supporting pro-choice women in office and writing a 50-page research paper on India’s surrogacy industry. After two short stints at Ms. and BUST magazines, Alanna landed an editorial fellowship at HuffPost and was hired months later as an associate editor. She was later promoted to editor of HuffPost’s women section and wrote and edited daily news pieces.